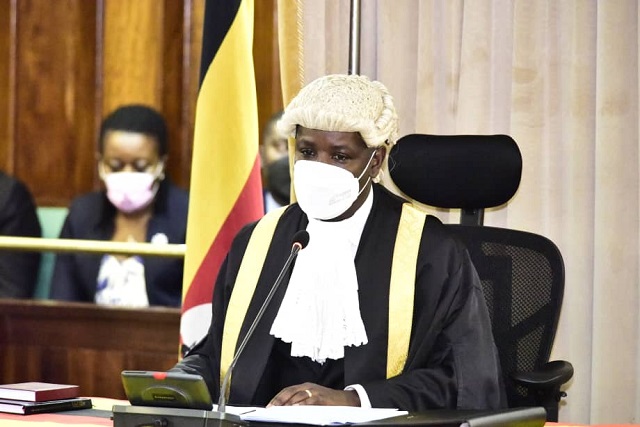 Kampala, Uganda | THE INDEPENDENT | The Deputy Speaker Thomas Tayebwa has directed the Minister of Local Government, Raphael Magyezi to present a comprehensive statement explaining why budgets that had not been approved by districts councils were submitted to parliament.

Tayebwa made the statement while delivering his communication to Members of Parliament during the Thursday plenary sitting.

He informed MPs that he had held a meeting with a section of district Speakers and Councilors on Wednesday who revealed that they were to pass their district budgets by 31st May.

Tayebwa added that budgets for all districts had already been submitted to Parliament whose line committee for Public Service and Local Governments has already considered and now being harmonized by the House Budget Committee before a debate in parliament.

He wondered whose budgets that parliament is currently processing given that districts are yet to approve their estimates for the next financial year 2022/2023. He emphasized that the district Chief Accounting Officers are supposed to upload budgets which have been already approved by the councils.

Tayebwa then directed Minister Magyezi to brief parliament on Wednesday next week on the budgeting process of local governments.

The Public Finance Management Act, 2015 gives Parliament a deadline of May 31st to approve the national budget. This is before the Finance Minister delivers the Budget Speech to the nation in the second week of June.

Tayebwa raised concern that the information he received compromises the spirit of decentralization where the planning and budgeting is a bottom up process. He cited a need for Parliament to be addressed on the process through which districts budgets are captured in the national budget.

The Deputy Speaker also urged MPs to follow up with their districts to ascertain how budgets are being process.

Muhammad Nsereko, the Kampala Central MP said that the House should start allocating time to debate the sectoral committee reports in order to understand the priorities of the different local governments and entities for better appropriation.