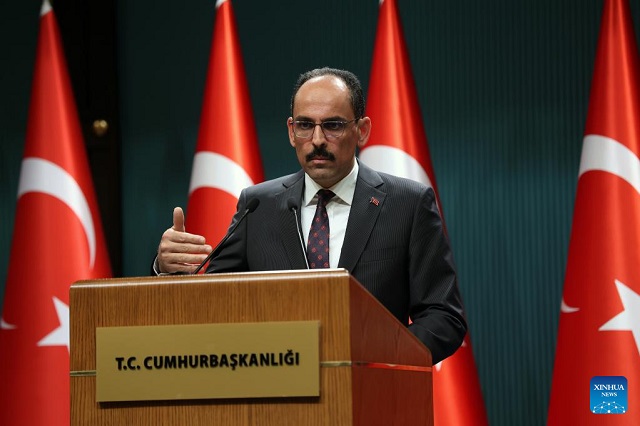 Turkish presidential spokesperson Ibrahim Kalin speaks at a press conference after Turkey’s talks with Sweden and Finland in Ankara, Turkey, on May 25, 2022. XINHUA PHOTO

Ankara, Turkey | Xinhua | Turkey has set out conditions for the Swedish and Finnish delegations to earn its support over the two Nordic countries’ bids to join the North Atlantic Treaty Organization (NATO), Turkish presidential spokesperson Ibrahim Kalin said on Wednesday.

Kalin, who also participated in Turkey’s talks with the two European countries, said Sweden and Finland’s procedure to join the military alliance will not move forward if concrete steps are not taken to address Turkey’s concerns.

Officials from Sweden and Finland met with Turkish counterparts in Turkey’s capital Ankara on Wednesday, in an attempt to resolve disputes with Turkey, which opposes their NATO membership bids.

“Our expectations were about taking concrete steps to address the presence of terrorist organizations … We’ve conveyed the information and documents on this matter,” Kalin told a news conference after their meeting.

“We stated that this procedure would not be possible until Turkey’s security concerns were addressed,” he said, adding Finnish and Swedish officials had made notes and will submit them to their governments.

Turkey will continue consultations with both Finland and Sweden until the two countries respond to Turkey’s concerns, according to Kalin.

Sweden and Finland have formally submitted their NATO membership applications. However, Turkey is the only NATO member that objected to their bids so far, accusing the two countries of supporting the outlawed Kurdistan Workers’ Party (PKK) and Syria’s Kurdish People’s Protection Units (YPG).

The PKK, listed as a terrorist organization by Turkey, the United States, and the European Union, has been rebelling against the Turkish government for more than three decades, and Ankara sees the YPG as the Syrian branch of the PKK.

Turkey also accused the two Nordic countries of harboring the members of the Gulen Movement, which Ankara claims is responsible for a failed military coup attempt in 2016.

“We sent 28 extradition requests to Sweden and 17 to Finland, unfortunately we did not receive any response,” Kalin said, referring to the members of these groups.

Ankara also expected the sanctions against Turkey’s defense industry be lifted, he said, adding Ankara has seen a positive development on the issue.