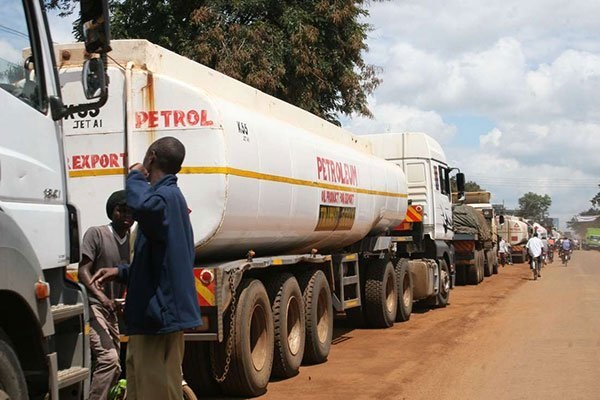 Kampala, Uganda | THE INDEPENDENT | Fuel transporters have asked the government to find them separate space to park their trucks from the general cargo due to safety reasons.

In a bid to prevent the spread of coronavirus, with truck drivers coming in contact with the community, government-designated stopovers for truck drivers to park. However, there has been no distinction between those carrying flammable liquids and other goods.

Uganda Transport Agencies Limited, the company transporting fuel for Vivo Energy, this week wrote to the Minister of Works Katumba Wamala requesting separate spaces indicating it was a safety hazard to just park in the same yard. Currently, all trucks are allowed to park in Mukono RVR Kyetume and Namboole stadium.

Lawrence Lugwana, the chairman of UTAL, said it is a risk since other truck drivers have been seen pulling out their stoves and cooking near fuel trucks.

Lugwana said they had written to Minister Wamala indicating that they had secured space in Migyera, along the Gulu highway where fuel truckers can park.

Byron Kinene, the head of the Uganda Long distance and heavy truck drivers association said their major contention is that people who carry ordinary goods are not trained in handling fuel. This means they see no problem smoking near a fuel truck.

On Friday, Kenya cabinet secretary for transport James Macharia said from June 1, 2020, fuel will be transported by pipeline to Kisumu and thereafter by water on Lake Victoria to Portbell or Jinja.

Other cargo will be transported by standard gauge railway (SGR) to Naivasha inland port and where trucks will pick it for delivery to Uganda, Rwanda and South Sudan. The aim is to minimize community contact with truck drivers seen like a weak link to the spread of coronavirus.

Most of the positive COVID-19 cases being confirmed in Uganda and most of the region are truck drivers.

Mourinho on transfers: I Would like Tottenham to be reasonable and not spend a lot of money
Mario will leave the Team after 30 June. The club was unable to extend the lease until the end of the season
PSG offered 55 million euros plus bonuses for Icardi. Inter wants 60 million without bonuses
Agent van Bergen: Zenit have not contacted me
Fans of Pilsen hung out in the car theater: watched the guest match, celebrated the restart and the victory
Players and coaches of the club from California call the fans every day: congratulations, advice and just chat. Very heartfelt!
Lampard will discuss the player's return to training with Kante, but the club will not press the Frenchman
Source https://www.independent.co.ug/fuel-transporters-want-separate-space-to-park-trucks/

Do not prescribe hydroxychloroquine for COVID: France

Virus apps expose tension between privacy and need for data

Scientists unravel secrets from the faults in our genes

Trump threatens to ‘close down’ social media after tweets tagged

US Congress set to ramp up China pressure over Uighur rights

UTB to market Uganda as safest destination after COVID-19

Distribution of face masks to start next week in border districts

Chinese in Canada a target of increased hate during pandemic

Goodbye to the crowded office

Businesses That Survive The Corona Crisis Will Do It Online.

Serie A meeting Italian Government to discover fate of season

Medical staff are the ‘special ones’ – Guardiola

Onion prices shoot up across markets in Acholi sub-region

Police to crackdown on private cars turned into taxis