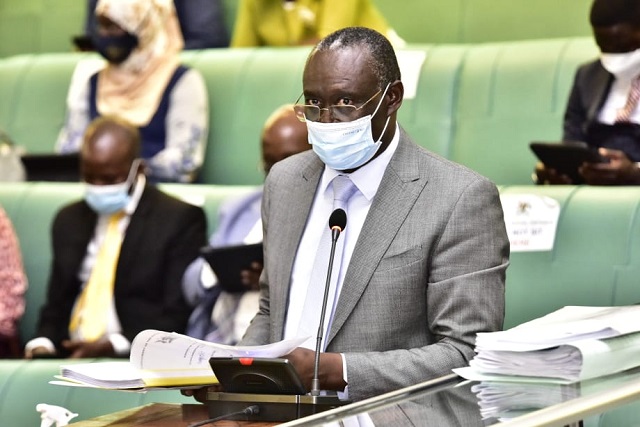 NEWS ANALYSIS | THE INDEPENDENT | Uganda’s Sh48.13 trillion National Budget has been approved by Parliament today. The approved budget has increased by sh5 trillion from the current financial year budget.

Over half of this money is expected to come from domestic revenue collection with Government targeting  a collection of 25.78 trillion Shillings of which over 23.75 trillion coming from tax revenue to finance the national budget for coming financial year 2022/2023.

Henry Musasizi, the Minister of State for Finance- General Duties explained that the increase of the budget from an initial proposed figure of 47.2 trillion Shillings is due to various recommendations from the different parliament sectoral committees reports in regard to budget estimates.

The theme for the new financial year budget is ‘Full Monetization of the Ugandan Economy through Commercial Agriculture, Industrialization, Expanding and Broadening Services and Digital Transformation and Market Access’.

Musasizi said that the budget aims at achieving three broad objectives of ensuring peace and stability through enhanced security and macro-economic stability as key foundations for growth and development, mitigating the impact of Covid-19 pandemic and enhance social economic transformation.

Government only expects to collect 1.04 trillion Shillings from Non Tax Revenue (NTR), 993.7 billion Appropriations in Aid to finance the new budget, and another 2.16 trillion will come from grants to support the budget.

The budget allocations for the coming financial year 2022/2023 have also been structured along the programme approach premised on the 18 development programmes highlighted in the third National Development Plan (NDP III).

The largest share of the resource envelope is towards the Human Capital Development programme that entails (Health, Education and Gender) at 8.74 trillion Shillings.

Payment of debts is also to take a big chunk of the budget and largest share will go to domestic refinancing at 8 trillion Shillings, interest payments 6 trillion, external debt repayments 2.41 trillion, domestic arrears 697.9 billion and Appropriation in Aid 238.5 billion.

In a minority report, the Opposition in Parliament described the budget as unrealistic given the increase in the initially laid budget by 879.73 billion from 47.25 trillion to 48.1 trillion.

“The increment will be financed largely by additional borrowing of 858.24 billion. This raises total projected borrowing in financial year 2022/2023 from 18.85 trillion to 19.71 trillion. This translates to an increment of 5%. The adverse effect of this level of borrowing will be felt through interest payments which will rise higher than the 5.5 trillion that was earlier projected when the budget estimates were laid. This expenditure takes first call on the revenue collection and reduces funds available for service delivery,” reads part of the minority report.

“This casts further doubt on the whether the proposed annual budget will be realized. This is mainly attributed to failure to undertake evaluations of past tax measures to inform proposed measures for the subsequent financial year,” Kivumbi said.

He recommended that all tax bills when being laid should be accompanied by regulatory impact assessments and that this will aid parliament determine the undertaken cost benefit analysis.

The Opposition also wants Parliament to amend Rule 159 of the parliament Rules of Procedure to specifically require Committees to undertake post legislative scrutiny.

Kivumbi says that the responsibility of Parliament should not end with bill scrutiny and ensuring that it is assented into law. He argues that this will empower the Committee on Finance to undertake scrutiny of tax and administrative policy measures passed by Parliament.