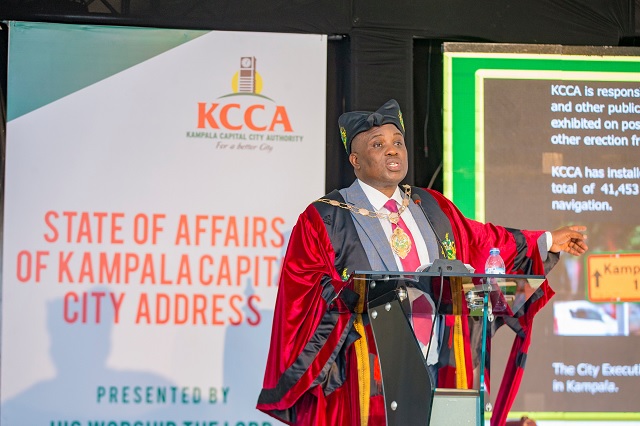 Kampala, Uganda | THE INDEPENDENT | Division mayors in Kampala are calling for decentralization of powers in order to improve service delivery in the city.

The mayors who were speaking at the sideline of the State of Kampala Affairs Address delivered by the City Lord Mayor Erias Lukwago at City Hall on Tuesday, note that the failure to decentralize services has affected the timely delivery of services.

In August 2016, the KCCA council resolved that the Authority wholly devolves functions of KCCA as stipulated in the third schedule of the KCCA Act of 2010. The schedule lists services to be offered by KCCA, which include establishing, acquiring, erecting, maintaining, and promoting fire brigade services, ambulance services, clinics, dispensaries, health, and other services in the city.

However, since the resolution was passed, it has not been implemented by KCCA.

Salim Saad Uhuru, the Mayor of Kampala Central Division says that divisions don’t have control over the services to be delivered and how they are prioritized. He says during the budgeting process, divisions discuss budgets but these are sent to KCCA for scrutiny.

Uhuru says that this cripples their ability to solve the challenges facing the people of Kampala in their respective divisions.

Due to centralization, the mayors say there is no equality in the implementation of development projects in Kampala.

Kawempe Division Mayor Emmanuel Sserunjoji says that while implementing the Kampala Institutional and Infrastructure Development Project (KIIDP II), Kawempe Division was largely not considered since barely 5 kilometers of roads in the division were constructed under the project.

Sserunjoji says that Mayors have no option, but to alternate between divisions headquarters and City Hall to lobby for different projects implemented by KCCA.

Paul Mugambe, the Mayor Nakawa Division says that the area is faced with numerous challenges which they would have wished to address urgently, but can’t since they lack powers to determine the budget estimates. He says the division currently has only one garbage collection truck which cannot effectively serve the entire division.

Mugambe says that KCCA should implement the resolutions made by Council in 2016 to improve better service delivery in Kampala.

In an attempt to implement the devolution of powers, KCCA introduced codes for division political leaders to be able to tract funds attached to divisions and hence ensure proper accountability.

The codes are to be used by the divisions of the Integrated Financial Management System and the program-based Budgeting System. Mugambe says that some divisions including Nakawa do not have functional codes yet.

Lukwago, says that together with the City Executive Committee, they have been pushing for the implementation of the same, but in vain.