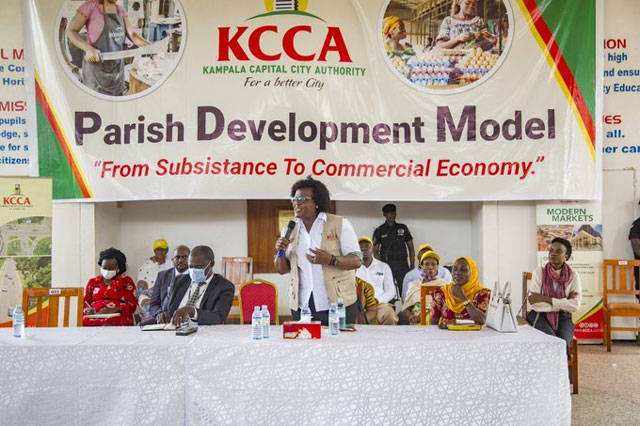 The seven-member committees, comprising representatives from different interest groups such as the youth, elderly, opinion leaders, politicians, the disabled, parish chief, and the parish chairperson will over the implementation of the project in the 99 parishes in the city.

Dorothy Kisaka, the KCCA executive director, says that although the committees are primarily for the implementation of the parish development model, the authority will work with them on other overriding roles.

Kisaka adds that as the government is set to roll out the parish development model, KCCA is also readying itself given the fact that Kampala is among the most densely populated districts in the country.

According to Kisaka, the committee members will serve on a voluntary basis under the spirit of patriotism and will also benefit from the revolving fund like any other parishioners.

Kabuye Ky’ofatogabye, the State Minister for Kampala Metropolitan Affairs say that what KCCA is doing is very instrumental in the implementation of the government program. He advised other local governments to emulate KCCA if they want the parish development model to succeed in their areas.

Kabuye said that this is not just a mere program but a serious strategy by the government to get people out of poverty, especially those living a subsistence lifestyle.

Some of the members of the different committees interviewed by our reporter expressed their readiness to execute their duties in line with the sensitisation they have received.

Aida prissy Zzavuga from Naguru II parish in Nakawa division said that they are ready to serve their country, adding that they would get satisfaction when they see their people receiving the money.

She added that given the explanation they have received, it will be very difficult for the money to be embezzled. Jesca Nakawundde from Kasubi parish, Lubaga division, said that their major role is to be overseers of the project funds, which job they are ready to execute effectively.