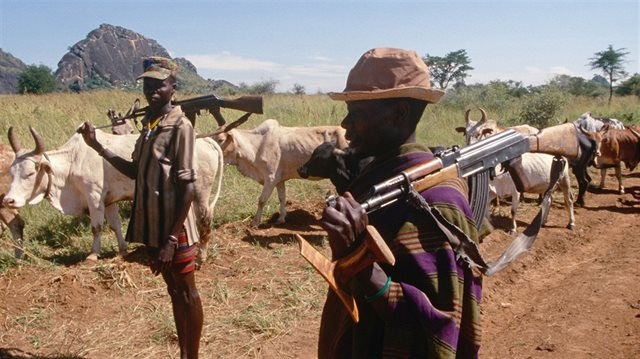 FILE PHOTO: Karamoja is awash with guns among herdsmen

Kotido, Uganda | THE INDEPENDENT | Business is paralyzed in Kotido district following the killing of the Napumpum sub-county LCIII chairperson Paul Lowok. He was gunned down by suspected Karamojong rustlers.

Joseph Lokiru, a resident of Napumpum told URN that the deceased was drinking together with his friends on Sunday when he was shot dead. “No one could tell the side where the bullet came from. We only saw the chairman crying for help and people scattering for their dear lives,” he said.

Mary Angolere, another resident says the LC III chairperson was shot by three people who were moving together.  “I can’t tell their identity because it was around 7pm,” she said. Lowok’s killing comes barely a month after his vice-chairperson was shot dead while driving stolen animals in Napak.

Mudong Nangole, the secretary of Panyangara village says that the lives of local leaders in Karamoja are at risk adding that the armed rustlers are now targeting the chairpersons. “Most of us are abandoning work for our own safety because the situation is bad. We are now the target for working with security,” he said.

Michael Longole, the Mt. Moroto Regional Police spokesperson confirmed the incident, saying police has visited the scene and recovered some of the cartridges. “We will get them by all means, we shall deal with them,” he said. The deceased’s body is lying in Kotido hospital pending postmortem. In a related development, Karamojong warriors have shot dead a UPDF soldier and injured two others in Kaabong.

The incident took place around 4 pm on Sunday along Loyoro, Losilang road. Major Isaac Oware, the UPDF 3rd Division spokesperson says that the three soldiers were riding a motorcycle from Loyoro sub-county in Kaabong to Kotido and landed in an ambush staged by Karamojong warriors who shot at them randomly.

He identified the deceased as Pt. Lopec Lotuke who is attached to Entebbe but was on his pass-leave. According to Major Oware, the deceased will be laid at his ancestral home in Kotido.