Museveni addressed nothing on the economic situation: Besigye 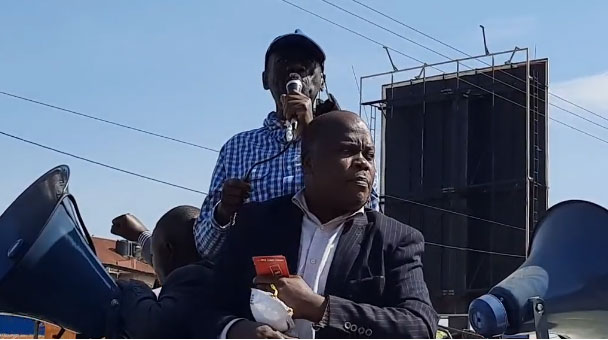 Kampala, Uganda | THE INDEPENDENT | President Yoweri Kaguta Museveni absolutely said nothing during his televised address on the economic situation in the country according to his longtime rival, Rtd Col. Dr. Kizza Besigye, the former Forum for Democratic Change-FDC party president.

This comes just hours after the president Museveni addressed the nation on the runaway commodity prices, saying that the government wouldn’t make any interventions to avoid adverse impacts which could even lead to the collapse of the economy.

Now in a rejoinder to Museveni’s speech, Besigye accuses Museveni of wasting time for many Ugandans who watched his speech as he wasted a lot of time saying nothing as he didn’t provide remedies to the current economic situation.

Besigye noted that the president tried to cover his empty speech with lies and shifted the blame on the worsening economic crisis to the effects of the COVID-19 pandemic and the Russia-Ukraine conflict.

The four-time presidential candidate, says although the two have affected the economy, they have just worsened the crisis in the country that is driven by other factors.

He says the president failed to address the country on critical issues including wasteful expenditure in the government and the huge public expenditure.

Besigye says that although president Museveni is appealing to Ugandans to tighten their belts and brace for the worst, this isn’t reflected in the government budget.

He cited the allocation of Shillings 2billion as a daily expenditure for the statehouse and wondered why the president who is advising Ugandans to eat cassava should continue to spend such huge sums of money.

On Sunday, President Museveni emphasized that the most effective solution to commodity prices is to find alternatives to costly items like wheat. The president noted that the use of local products like cassava and bananas can help reduce the high costs of producing bread.

This wasn’t the first time the president has offered such advice. He had already mentioned the same while addressing the nation during the international Labour day celebrations. However, the proposed local alternatives are already being affected by the skyrocketing fuel prices.

Besigye also questioned why president Museveni failed to suggest solutions to the loopholes, which are swallowing government money in bribes and corruption. According to available statistics, every year Uganda loses an astonishing Shillings 9.14 trillion to corruption, which is equivalent to 44 percent of the total government revenue in 2019.

To Besigye, if the government eliminated the disgrace and damage of corruption, the situation wouldn’t be as ugly as it looks right now. According to Besigye, the government is currently giving back to the population, which grapples with high taxes as people foot high medical bills since the health system is in limbo and education costly.

He further argues that even if the situation was a result of the COVID-19 effects and the war in Eastern Europe, people couldn’t be suffering this much if the government was meeting the basic requirements. Quoting from the President’s speech, Besigye noted that the government is eying the oil cash as the only way to save the situation, which he is skeptical will also be put to good use.

Besigye notes that since the president has come out and rightly stated that he has nothing to do in relation with the current crisis, this justifies his campaign to rally Ugandans to wake up, join hands, and send a unanimous message to those in government who are indifferent to the hard economic situation that Ugandans are faced with.

Last week, police held Besigye in his car for about eight hours as he attempted to drive to the Kampala city center from his residence in Kasangati town council in Wakiso district to rally Ugandans to raise up against the skyrocketing commodity prices.

The prices of most imported and domestically manufactured products have been increasing since late last year pushing the inflation rate up from around 3.2 percent in November to 4.9 percent in April 2022. Soap, cooking oil, and other similar products are the most affected while the price of fuel, wheat, and fertilizer are also on the rise.