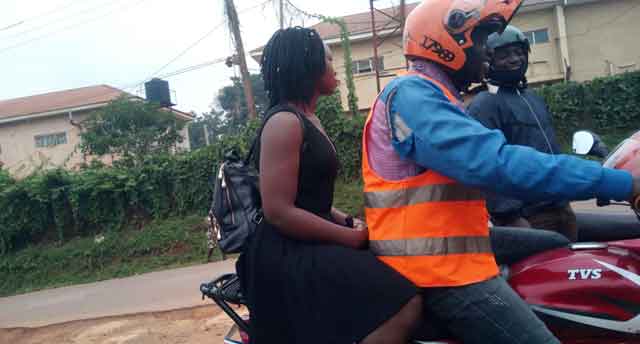 Farida Nampiima, the traffic police spokesperson, explains that boda boda riders who use the upper part of northern bypass have increasingly become victims of speeding cars. While on the flyover, the riders don’t have escape route once cornered by motor vehicles.

Nampiima adds that they have noticed that Boda boda corneredby speeding vehicles on northern bypass flyovers ended falling off and being killed instantly. Although police have not declared whether it will use force to stop riders from using northern bypass flyovers, she explains that speaking about it could help riders and passengers on motorcycles know that it is risky to their life.

“We remind all the Bodaboda riders using northern bypass to avoid using the upper part of the bypass,” Nampiima said. “Bodaboda riders tend to use that upper part of the bypass. All those roads lead to the same point. They should use the lower part. It is risky using the upper part because in case of a crash you turn over and die at once. There is no escape route. So we advise them to use the lower part not the upper of the northern bypass.”

Nampiima’s caution comes of the heels of the 2021 road safety and traffic report which shows motorcyclists were the most killed group of road users surpassing pedestrians for the first time. At least 1,390 motorcyclists and 512 passengers of motorcycles died in 2021 road crashes. This means five people died in motorcycle crashes every day across the country.

The data shows KMP north registered 336 deaths in 2021 of which majority were Boda boda riders while 1,124 people were left with serious injuries.   The situation is more less the same in KMP East where 255 died in Bodaboda crashes while 1,040 survived with gruesome injuries.

Godfrey Mulimi, a Bodaboda rider along northern bypass, says traffic jam often forces them to use northern bypass flyovers especially at Bwaise where vehicles get stuck for hours.

Mulimira explains that when he is coming from Namboole or from Busega especially in the early morning or evening hours, using the flyover at Bwaise becomes the only option to beat the traffic congestion.

Mahad Kintu, a Bodaboda rider in Namugongo says he has severally survived being hit by speeding cars on the northern bypass. Kintu explains that he tries as much as to avoid riding on northern bypass unless he gets a passenger going to areas of Busega because it is easier than using other routes.