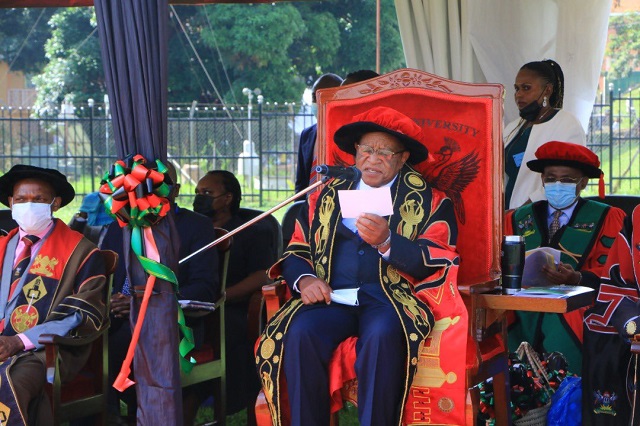 Kampala, Uganda | THE INDEPENDENT | With his term of office elapsing in August this year, Makerere University Vice-Chancellor Professor Barnabas Nawangwe could be positioning himself for another term amidst queries about whether he is still eligible.

During day two of the week-long 72nd graduation ceremonies, the University Chancellor, Prof. Ezra Suruma couldn’t resist the temptation of openly lobbying for Nawangwe’s return for another term to lead Uganda’s oldest institution of higher learning.

Heaping praises on Nawangwe, who has been at the helm of the university since 2017, Prof.  Suruma noted that the vice-chancellor has done a remarkable job propelling the university to new heights thus deserving a second term to continue and complete his great works.

Suruma’s remarks are not any different from those made by President Yoweri Kaguta Museveni and the Education and Sports Minister, Janet Kataha Museveni while inauguration the graduation ceremonies on Monday this week. The remarks at a time when the talk is rife that Nawangwe is pushing for a second term in office.

The reports have already stirred debate and concerns among the academic and administrative staff. Although Nawangwe has publicly stated that his first term in office is ending soon, he has not yet pronounced himself on whether he would like to get a second term. However, a highly placed source in the university told our reporter on condition of anonymity so as to speak freely on the matter that the battle for the second term has been on for the last two years.

“Do you think Suruma is ignorant of how things have been moving at Makerere university? He clearly knows that there has been an age limit for the VC job. And he is aware that Nawangwe is above the limit. But he is publicly lobbying for him,” the source noted. Another source noted that there has been a power struggle at the university with those opposed to Nawangwe’s second term in office being pushed out.

The source was referring to the recent dismissal of Jefferson Kamugisha, the Director legal and Human Resource Director, Dr. Davis Malowa. The Universities and Other Tertiary Institutions Act 2001, the principal law that guides the administration of universities and other higher institutions of learning in Uganda doesn’t cap the age of the vice-chancellor.

For years, Makerere has had an age limit as one of the requirements for people eyeing different positions in the university. Earlier rules had kept out candidates above 60 years of age. However, the 2017 Search Committee under the leadership of Dr. Irene Ovunji, the then Deputy Chairperson of Makerere University Council extended the upper age limit when they announced that candidates interested in the post could be between 40 and 65 years.

“Associate Professors get contracts up to the age of 70, why not the VC candidate? The Vice-Chancellor can be 65 years and serve their term until they’re 70, then they retire.” Ovonji was quoted by the press as she justified the committee’s decision. The modification of the rule cleared Prof. Ddumba-Sentamu, who had already clocked 64 to contest for reappointment.

He, however, declined to seek another term given the acrimony that characterized his five-year tenure as vice-chancellor.  It should be recalled that there were voices that said the change in the age requirement was altered to benefit Nawangwe who was Ddumba’s deputy at the time. Nawangwe, who media reports indicated had the support of not only the majority of the senate and council members who chose the vice-chancellor but also the minister of education Janet Museveni and the President, was 61 years of age at that time. Extending age limits for management slots at Makerere is not new.

Apart from Prof. Nawangwe, Prof Mahmood Mamdani was also a beneficiary of the extended age limit during his tenure as the Director of Makerere Institute of Social research-MISR. Like Nawangwe, the decision to extend the age cap in Mamdani’s case is said to have been done explicitly on the orders of President Museveni. Mamdani had already past the 70-year age mark, which meant he was ineligible.

Several people at Makerere University are convinced that if the powers that be want Nawangwe to remain at the helm of the institution, his term will be renewed regardless of the legal constraints unless someone challenges the move in court.  But if Mamdani’s experience is anything to go by, the grumbling might end up at the gates of the university that is celebrating 100 years this year.

Dr. Anthony Tibaingana, a lecturer in the College of Business and Management Sciences notes that Makerere is not short of able people to lead the institution and calls on the university leadership to desist from ring-fencing positions for certain individuals.

“Age limit is justified by science and other aspects. Actually, in my view, the age limit should be pulled back to 60 years. This great institution has a lot of people with potential. And we cannot be putting our focus on one person. What will happen if he wants a third term? Or more we adjust again?” Dr. Tibaingana wondered.

Dr. Tibaingana warned that failure to follow proper procedures could prompt some people to seek legal redress, which will be costly. To drive his point home, he referred the matter to that crisis that Makerere has experienced in the last five years resulting in the absence of a substantive Deputy Vice-Chancellor in charge of finance, owing to inadequate compliance with well-established systems.

Another puzzling phenomenon is the possibility that the council is granted Nawangwe another term without instituting a search committee. Dr. Robert Kakuru, the Chairperson of Makerere University Academic Staff Association-MUASA, says that he has also heard about this possibility. To him, if done, it will be tantamount to undermining the university as an institution, which has had its values for years.

“When Prof. Nawangwe was coming into office, there was a criterion and he clearly knows that the criteria have been there. He knows that after every five years. Public universities have to search for a vice-chancellor. It is however unfortunate for Makerere to steep to such trenches. I find it very challenging that it is being talked about in an academic institution,” Kakuru told Uganda Radio Network.

A similar plot of skipping the search process is currently at play at Kyambogo University where Prof. Elly Katunguka, whose five-year contract is coming to an end. Prof. Elly Katunguka recently argued that as the incumbent he doesn’t need to go through the normal process, adding the university council will determine his fate.

For Kyambogo, Katunguka is riding on a court decision in the case of former Vice-Chancellor Omolo Ndiege who dragged the university to court and won for failure to reappoint him.  Dr. Kakuru noted that under the current circumstances, Makerere’s academic fabric has been scrapped as the players have turned to political discourses, which he says predicts doom for the institution.

He noted that swaying from academic lines has already cost the university its reputation with its ranking falling from second in Africa in 2017 to the sixteenth position currently.

Nawangwe’s five-year tenure at the helm of Makerere has been characterized by controversies including the suspension and expulsion of several students and staff for flimsy reasons.