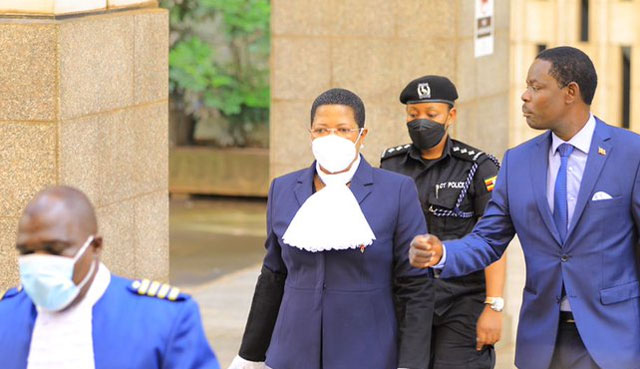 Kampala, Uganda | THE INDEPENDENT | The Speaker of Parliament, Anita Among has warned legislators against staging protests ahead of the debate on the controversial coffee agreement. According to Among, she will not hesitate to stop the debate should any legislator demonstrate during the discussion of the report prepared by the Committee on Tourism, Trade and Industry.

“I want to give this strong warning; I have heard that there are members who want to demonstrate during the debate of the coffee report. And I am warning members that if I see that kind of demonstration, I will stop the report,” Among warned ahead of the debate this morning.

Led by its chair Mwine Mpaka, the Mbarara City South MP, the committee investigated what was termed as unfair terms in the coffee agreement signed between the government and the Uganda Vinci Coffee Company Limited.   Among noted that several MPs were sighted entering parliament with T-shirts to aid the demonstration.

“By the time Dr. Abed Bwanika brought this, he wants action. And now we have a solution…by the time government accepts that we are going to review within three months, a review in the process can be terminated,” Among added. She wondered why there is a lack of respect for the institution.

There have been demands by several MPs in the past few weeks for the tabling of the report on the coffee agreement in parliament for debate. It came to the Committee Chairperson, Mwine Mpaka informed the house that he was ready to table the report.

In her response, the Speaker cautioned the legislators on Tuesday last week against making reckless statements in regard to the committee report, saying the leadership of Parliament wouldn’t suffocate the report.

In the same week, media reports indicated that President Yoweri Museveni met a section of the committee members in a closed-door meeting on Friday and cleared the report for presentation and debate. Kasambya County MP, Gaffa Mbwatekamwa later informed journalists that the meeting had resolved to present the committee report without making any changes.

According to the agreement, the government gave Uganda Vinci Coffee Company Limited free land in the Industrial and Business Park at Namanve measuring 27 acres after demonstrating its capacity to establish a coffee processing facility in Kampala.

However, a number of people involved in the coffee business including farmers, exporters, processors and opposition legislators have contested the agreement and described it as a bad deal. The Shadow Minister of Agriculture, Abed Bwanika, says the agreement contravenes the Constitution and Section 52 of the National Coffee Act, 2012, which mandates the Uganda Coffee Development Authority to determine coffee prices.