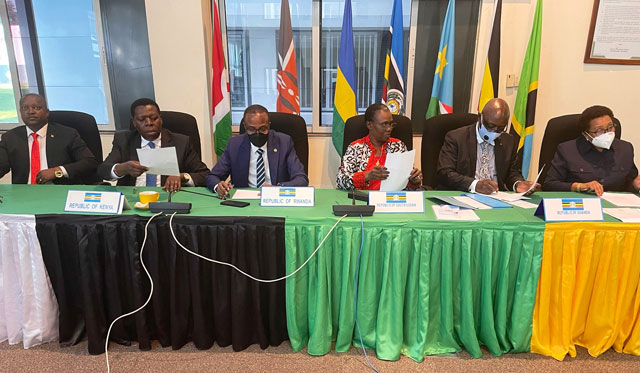 Kampala, Uganda | THE INDEPENDENT | Uganda and Tanzania have signed a Memorandum of Understanding on cooperation in defense and security for the East African Crude Oil Pipeline – EACOP project.

The deal was signed on Friday at the climax of a three-day the 1st Inter-governmental Security Committee Meeting held at Skyz Hotel Naguru in Kampala. It involved the technical working committee, Chief of Defence Forces, and Security Ministers from the two East African countries.

The Committee meeting was convened following the signing of the MoU between the two countries on the establishment of Inter-Governmental Security for the EACOP project in 2020. It was an outcome of the decision of the 4th Joint Permanent Commission – JPC meeting held in Kampala between 17th-19th January 2022.

In the JPC meeting, it was agreed that the Intergovernmental Security be constituted to foster cooperation between the State Parties in performing their security functions in support of the oil pipeline project.

“The good work so far done will help to deepen cooperation between our sister countries and strive to create a secure and conducive environment for the social-economic transformation of our countries,” Ssempijja said.

Dr. Tax Stergomena, the Minister of Defence and National Service of Tanzania alluded that the diplomatic and military relations between the two countries are significant to the construction of the crude oil pipeline, a strategic project with multiple socio-economic benefits.

Dr. Stergomena was concerned that terrorism remains a major threat requiring joint and proportionate efforts and measures, adding that Tanzania remains committed to working with  Uganda in addressing peace and security challenges.

The Inter-Governmental Agreement between Uganda and Tanzania was signed in May 2017 and Foundation Stones for the EACOP were laid in Tanga in August 2017 and Hoima in November 2017.

The EACOP is a 1,443-kilometre-long, 24-inch diameter, buried and heated oil export pipeline that will transport Uganda’s crude oil from Kabaale – Hoima in Uganda to the Chongoleani peninsula near Tanga port in Tanzania.