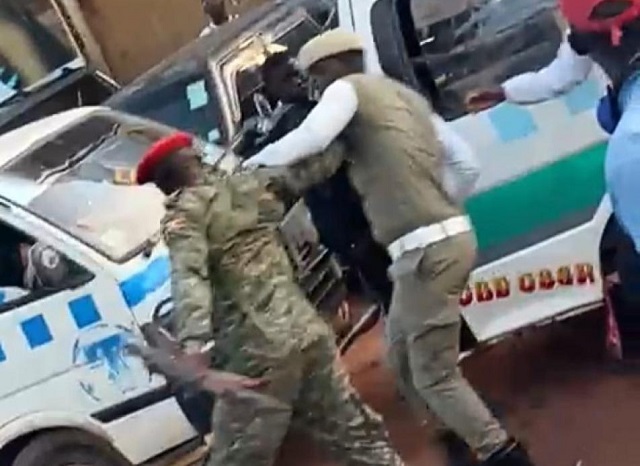 Kampala, Uganda | THE INDEPENDENT | The Uganda People’s Defense Forces-UPDF and Police are jointly investigating an incident where a military police officer assaulted a traffic police officer in Kampala.

The incident occurred near Mukwano mall along Kyaggwe road at Kiseka market, when military police officers driving a green vehicle registration number D02DF08P ordered the traffic officer to clear the way for them in vain leading to a scuffle.

“The military police officers were in a rush, but the traffic officer told them to be patient. Shortly one of the military officers jumped off the pick-up truck and grabbed our colleague and dragged him to their vehicle. That’s how we intervened,” a security guard at Mukwano Mall said on condition of anonymity.

Video footage that has since gone viral on social media, shows the military police officer dragging the traffic officer by his collar as his colleague tries to resolve the standoff in vain. Kampala Metropolitan Deputy police spokesperson Luke Owoyesigyire, who declined to mention the name of the traffic officer confirmed the incident.

He says that during the scuffle, the military police officer discharged a bullet that damaged a Toyota Premio registration vehicle number UAR 308L belonging to a civilian that was in the traffic jam.

“He ordered the traffic officer to open the road for them but he insisted on asking them to be patient since there was a lot of traffic. To his surprise, he was just grabbed by the collar, a scuffle ensued and a bullet was discharged by the military police officer,” Owoyesigyire said.

He says that the army and police have opened joint investigations into the matter.

The Defense Ministry Spokesperson, Brig Gen. Flex Kulayigye told URN that the investigations will establish what transpired at the scene, adding that whoever will be found in the wrong will be handled according to the law.

This is not the first incident where UPDF officers are misbehaving on roads. In January this year, a UPDF soldier shot Constable Robert Mukebezi when he found him towing a military vehicle that had been involved in an accident.

In 2019, Major General Matayo Kyaligonza and his bodyguards assaulted Esther Namaganda when she stopped them from making a u-turn in the middle of the road in Seeta.