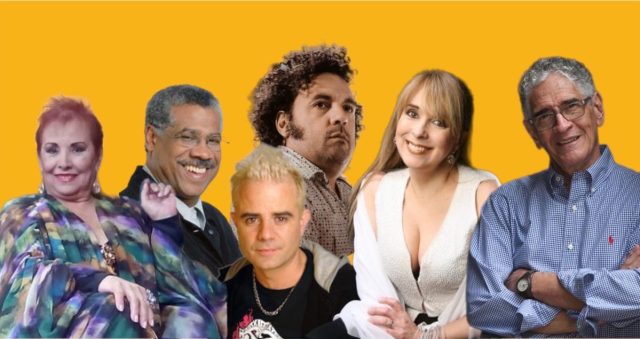 Musician and producer Cheo Pardo has a mission: re-recording and re-releasing the music we lost because of the demise of the Venezuelan music business.

When I was growing up, my parents had a cabinet full of CDs. I vividly remember standing in front of it, browsing through Zulian gaitas, Franco de Vita, Beethoven, or Simón Díaz and picking an album to listen to. One of the hardest parts about leaving Venezuela was leaving behind those CDs. They were cultural artifacts that connected me to a country that I had only heard in stories.

This is the case for many Venezuelans living abroad, who left their music collections behind. After all, there are only so many things that you can pack in your suitcase. However, the rise of music streaming services like Spotify and Apple Music, made it easy to listen to the songs we left behind and revisit the memories associated with them.

This seemed like a great solution for consumers, but it came with an unexpected cost for artists. Because of the rampant piracy in the digital world, the royalties of many beloved Venezuelan classic artists are being stolen by illegal uploads and, given that the downfall of the country’s discographic industry has left them in limbo regarding the ownership of their songs, there’s little they can do to fix it.

Now there’s an effort to make things right. For a little over a year, José Luis “Cheo” Pardo, a Grammy winner, music producer and former lead guitarist of legendary Venezuelan band Los Amigos Invisibles, has been on the quest of re-recording the music of classic Venezuelan artists so they can regain ownership over their songs and earn royalties from them. For him, this is more than just re-recording songs: “I know many of these artists and it’s very frustrating,” he told Caracas Chronicles, “both because they don’t get recognition and because, somehow, there’s a generational gap between artists where the new is new and the old is old, where everyone dies for what’s new and sees the old as worthless. I think this is an important effort to bring back artists that lived through so much and that not only have a lot of knowledge but whose stories are also part of the not often remembered history of the country.”

Cheo’s process involves re-recording the music from scratch. He partners with singers and instrumentalists and takes the artists back to the studio to record their song and bring it back to life. His latest release is Frank Quintero’s song “Apóyate en mí.” Quintero joins a list that includes artists like Mirla Castellanos, Guillermo Carrasco, Daiquirí, Mirtha Pérez, Pedro Castillo, Eddy and Delia, Aguilar, Kiara, María Teresa Chacín, Delia, Pablo Dagnino, and Colina. Some of the re-recorded songs can be found on Spotify (here’s a playlist) and other streaming services.

Cheo believes that this is part of his responsibility as an artist:

“Cultural agents, those of us who are tasked with providing our country with culture, have the job of ensuring that our culture doesn’t get lost. For example, in the case of Venezuela, when you evaluate the culture from the ‘60s and ‘70s, those who preceded us, the usual comment is ‘wow, we were culturally sophisticated”. The industry was not isolated from the twists and turns of the second half of the 20th century in Venezuela and the highly sophisticated music industry, which had artists like Alfredo Sadel and Mirtha Pérez, ended up in a situation where some of its most renowned figures don’t even own their songs. How did all this happen?”

The Rise and Fall of the Venezuelan Music Biz

According to a paper written by Adriana Alfonzo Luis, during the ‘60s and ‘70s, the discographic industry in Venezuela was ruled by multiple small record labels like Velvet de Venezuela, Palacio de la Música, and Discoteca. They shared the market with a few international labels and existed in a stable ecosystem until the 1980s, when the industry skyrocketed. This was a result of a combination of factors that pushed the music industry inward. Carlos Andres Pérez’s Presidential Decree 598 in 1974, for instance, forced 50% of musical radio programming to be Venezuelan music. Later on, the devaluation of the bolivar in 1983  limited the country’s ability to pay for foreign artists. All of this forced the music industry to invest in national musicians. “This created a scene with superstars like Yordano, Franco de Vita, and Ricardo Montaner. They all appear in this era,” explains Cheo.

This was also the era of the rise of media conglomerates. In Venezuela, there were two: Organización Diego Cisneros (ODC), which owned Venevisión TV network, FM Center radio stations, and the  SonoRodVen record label, and 1 Broadcasting Caracas Enterprises (1BC), which owned Radio Caracas Televisión, Radio Caracas Radio and the Sonográfica record label. “All the distribution engine was controlled by those two companies,” says Cheo and adds that “the other record labels couldn’t enter radio and TV stations and the labels that had traction from the ‘60s and ‘70s started to fade as conglomerates’ labels took off.”

These labels owned by conglomerates, however, were severely affected by the emergence of piracy both in CD and digital form, and, as doing business in Venezuela became more challenging with the rise of chavismo, they slowly faded away. SonoRodVen was purchased by Polygram, which in turn merged with Universal. Sonográfica still operates, but it’s drastically less influential than it used to be.

The changes in the industry meant that a lot of the catalogs these companies owned ended up being scattered through many firms. Cheo mentioned that this was detrimental for artists: “Our artists were in eternal debt with the record labels. You were always in debt and never received royalties. Well, that debt was bought by someone else and they lost sight. An artist, for instance, that doesn’t speak English and has to deal with Universal, BMG, and Sony doesn’t even know who to write to.”

The situation devolves into ownership limbo. This, combined with the rise of streaming services, allowed people with no relationship to the artist to upload low-quality versions of the music and take their royalties. Cheo pointed to an example: “There’s a compilation of Karina that she never made and it even has a photo from Sábado Sensacional on the cover. It’s piracy, very similar to the burned CDs we saw on the streets, but digital.” He’s been in touch with Spotify, and even with lawyers, but these solutions are always a long, hard road, especially for artists who have been affected by years of economic upheaval in Venezuela.

When singer-songwriter Guillermo Carrasco mentioned that he was affected by this problem and didn’t even know where his recordings were, Cheo decided to take matters into his own hands and proposed to re-record his music. They started with a song but stopped because of financial obstacles:

“The project got stuck because we had to hire pianists and a brass section and, well, I didn’t have money. Neither did Guillermo. Then, randomly, I posted the incomplete song on Instagram and wrote the story about what we were trying to do.”

After he did this, he received an overwhelmingly positive response. Audiences were excited to hear it and wanted to be a part of it. “They asked us to make a GoFundMe so that we could finish it, so I said ‘Let’s set up a Patreon and let’s upload one per month’ and there we go.” Ever since, support by the Patreon community has continued to grow and, so far, Cheo has re-recorded over 15 songs.

However, in addition to being an exercise in reclaiming ownership, the project has also served as an opportunity to bridge generational gaps. Cheo has been emphatic about involving young artists in the recording process. “We have to make these merges because they don’t happen that often and someone needs to do it. I feel like I’m between the classics and folks like Rawayana,” he says. In fact, Beto Montenegro, from indie band Rawayana, has been involved. Cheo mentioned that he came in to record when they were working on a song by Daiquirí and was impressed by founder and bandleader Alberto Slezynger’s work: “He said ‘wow, I’d never heard this’ and I said ‘well, meet the man, he’s on Whatsapp, talk to him.’ When we hear older artists, it’s easy to think that they are over, but they were hipsters once.”

Cheo explained that this project is not just about songs, it’s about protecting our cultural heritage: “We have to bring this music back to the conversation so that we don’t forget it.” And he’s not stopping anytime soon. He’s going to release another song with Frank Quintero and is working on recording music with Tania de Venezuela, whose discography has been largely missing from the internet. There are even some early conversations about releasing a vinyl record.

While there’s a lot of work to be done to preserve our cultural heritage, it’s because of Cheo’s project that we can honor the artists that came before and save their work for the next generations. It’s exciting to see where it goes next.

Venezuela Demands Prepayment For Its Oil