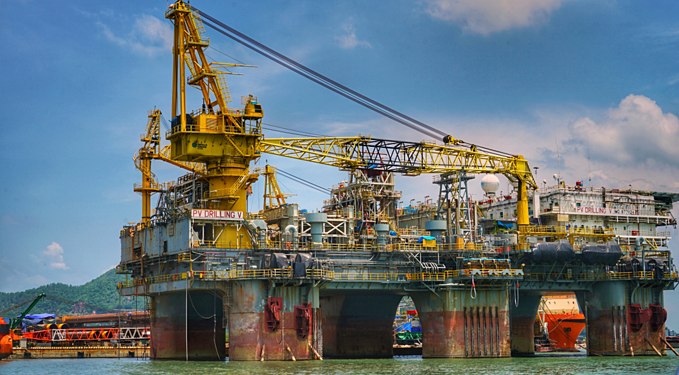 The industry used to receive around $2 billion from foreign investors each year, but this has come down to now only a few hundred million dollars, Tran Sy Thanh, chairman of state oil firm PetroVietnam (PVN), said at a recent meeting.

Contributions to Vietnam’s oil reserves have also been decreasing. "When our predecessors extracted one ton of crude oil (to use), they put another 1.5 or 2 times as much into reserves. Now we take out 1 ton of crude oil, we only add another 0.3-0.4 percent into reserves," he added.

Regulations make it costly to explore for new sources of oil. For instance, Vietnam’s Law on Water Resources requires each exploration lot to pay $10-15 million in taxes, which is too high given that investment is so limited, Thanh said. "It makes things for us (oil prospectors) very difficult, it’s like we are tying ourselves down."

Without funds for drilling and exploration, there is no way to increase reserves. Despite changing conditions, the National Assembly has maintained its targets for the oil and gas industry, but has not provided any legal or systemic solutions the sector needs, Thanh said.

Dr. Nguyen Hong Minh, director of the Vietnam Petroleum Institute, said that Vietnam’s oil and gas industry has a lot of assets, but lacks the operating capital as a result of restrictive regulations and red tape.

Truong DinhTuyen, former Minister of Trade, said that the key to resolving bottlenecks in the industry is to amend the Law on Oil to create incentives for PVN.

"Energy security is one of the three pillars of economic security, strongly impacting food security and financial security. The oil law needs to be revised, and incentives offered in a high-risk industry for foreign investors, and thereby restructuring and raising the capacity of the industry," he said.

Manchester City players have congratulated Liverpool on the championship corridor. The empty stadium looked sluggish
De Bruyne broke the personal record for goals in a season in the championship – 11 goals
Atalanta captain Gomez is the first Serie A player in the twenty-first century to give 15 assists in a season
Manchester City arranged a championship corridor for Liverpool
Mohamed Salah: I hope to stay in Liverpool for a long time
La Liga President: Many try to justify failures on the field by talking about rest and schedule
Rivaldo on Griezmann: I Don't understand why the world champion and multi-million dollar transfer only comes out at the last minute
Source https://e.vnexpress.net/news/business/industries/declining-investment-limits-vietnam-s-oil-and-gas-industry-3954621.html