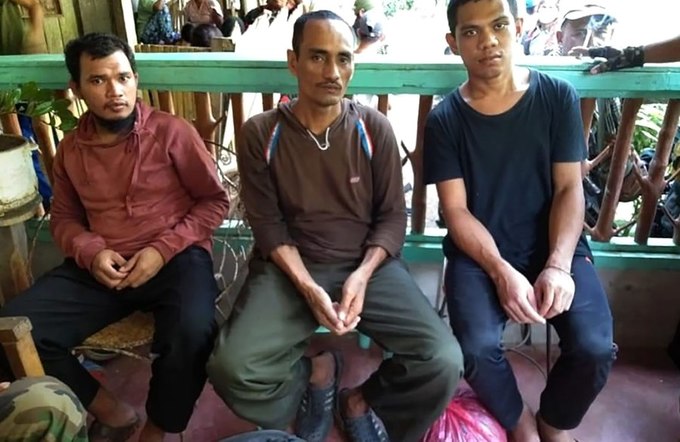 Three Indonesian fishermen held by members of a notorious Islamist kidnap-for-ransom group have walked free 18 months after they were abducted off the southern Philippines. Photo by AFP

Three Indonesian fishermen held by members of a notorious Islamist kidnap-for-ransom group have walked free 18 months after they were abducted off the southern Philippines, the military said on Sunday.

The men were kidnapped in January 2017 while on board a speedboat off the southernmost island group of Tawi-Tawi, which together with the nearby Sulu archipelago are preyed on by Abu Sayyaf militants.

The Indonesians were freed in the town of Indanan in Sulu on Saturday and "turned over" to authorities following "intensified military operations" against the Abu Sayyaf, a regional army spokesman said without giving details.

Asked if a ransom was paid, Lieutenant Colonel Gerry Besana told AFP: "No, there was definitely no ransom given. (They) were pressured by our operations."

The Abu Sayyaf has been known to behead hostages unless ransom payments are made.

The group is a loose network of militants formed in the 1990s with seed money from Osama bin Laden's Al-Qaeda network. It has earned millions of dollars from banditry and kidnappings-for-ransom, often targeting foreigners.

The Abu Sayyaf is based in strife-torn southern islands but its members began in 2016 to kidnap sailors in the waters between Indonesia, Malaysia and the Philippines.

The rise in abductions sparked Indonesian warnings that the region could become the "next Somalia" and pushed the three neighbours to pledge joint naval patrols.

The hostages were brought to a military hospital and turned over to the Indonesian ambassador who was to accompany them to the Philippine capital Manila, a military statement said.

The Abu Sayyaf is still holding 11 hostages, including a Dutch bird-watcher abducted in 2012 and a Vietnamese captive, according to Besana.

Manchester United and Manchester City will compete for Coulibaly and Skrinjara
Juventus and Manchester City are the leaders in the fight for Adam Traore
Pep Guardiola: I Want Messi to stay in Barcelona
Kike Of Setian: Of course, we can win the championship. This is evidenced by facts and mathematics
Bartomeu on Messi: We have to renew the contract. Leo told me that he wants to finish his career at Barca
Chelsea are willing to pay Havertz 8 million euros a year and will soon start negotiations with Bayer
Showsport - about the crisis in Barcelona: Bartomeu set up Setien, star senators impose tactics on coaches
Source https://e.vnexpress.net/news/world/southeast-asia/three-indonesian-hostages-freed-in-philippines-army-3810150.html