Business Maverick: Asia’s Factories May Be Over Worst as China Demand Picks Up

Asia’s factory managers saw glimmers of hope in June, with the region’s purchasing managers indexes turning up across the board as demand from China picked up.

PMIs for Japan, South Korea, and Taiwan — the region’s manufacturing powerhouses — improved slightly but stayed below 50, the dividing line between contraction and expansion. Factory output in Vietnam and Malaysia grew for the first time since January and December before the virus spread in the region. Indonesia’s index surged almost 11 points, the biggest increase since at least 2011, while remaining below 50. 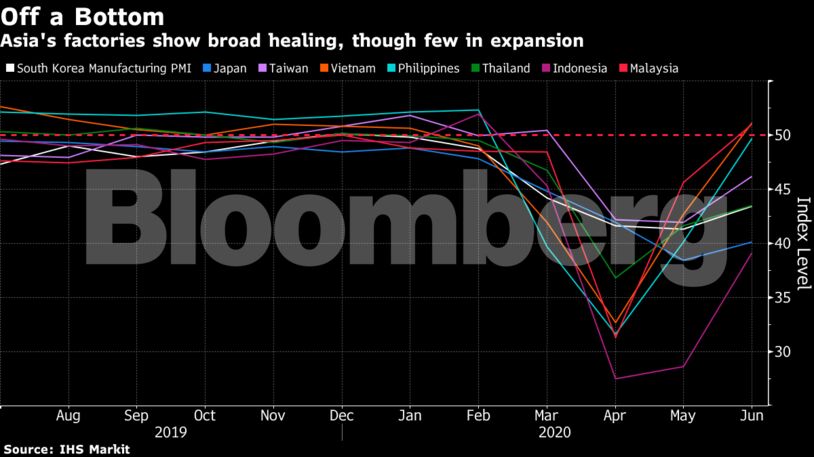 The signs of a turnaround follow another report from China earlier this week that showed an official gauge for China’s factory activity rose in June to 50.9 from 50.6 a month earlier. The non-manufacturing measure increased to 54.4.

Financial markets rallied in the second quarter, buoyed by optimism that re-openings globally would damp soaring unemployment and reinvigorate consumption. However, setbacks in controlling virus outbreaks in many countries, including the U.S., have curbed sentiment. Bloomberg Economics now expects a 4.7% contraction in the global economy this year, down from a previous estimate of a 4% contraction.

“Asia’s June manufacturing purchasing managers’ indexes indicated most economies are recovering, though at varying speeds. China’s official PMI showed that the recovery accelerated, supported by external demand. Some economies such as Australia experienced an initial strong rebound as lockdowns were relaxed. Some others — notably Japan — remained deep in contraction.”

Analysis by Oxford Economics found that regional exports are headed for their worst outcome in years, even as the easing of lockdowns paves the way for a gradual recovery.

“The easing in global restrictions and improving Chinese demand are encouraging, but we expect regional exports to remain under pressure in the short-term, given the ongoing global recession,” Sian Fenner, an economist at Oxford Economics, wrote in a note before the PMI data. 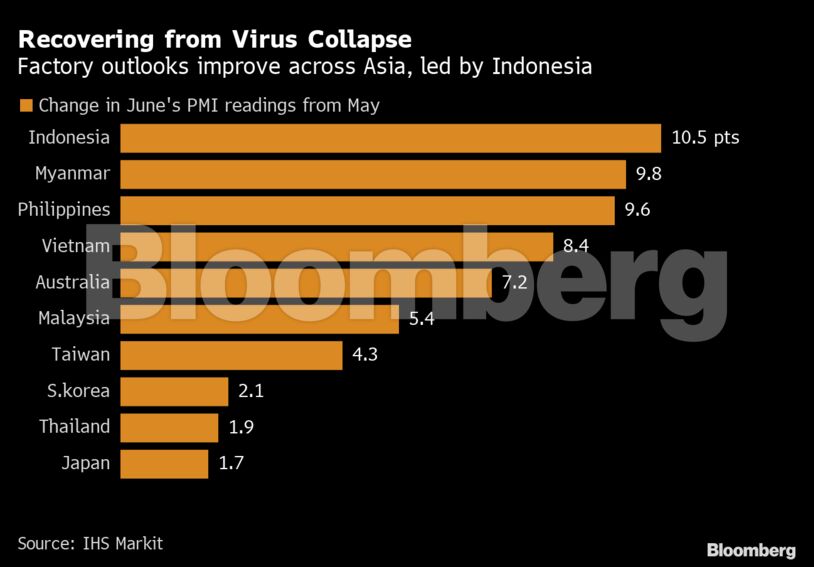 In South Korea, a bellwether for global trade, exports continued to contract in June, but at a slower pace than in previous months. Shipments fell 10.9% from a year ago, an improvement from the 23.6% slump in May.

“Given the cyclical nature of South Korea’s export-oriented economy, it appears the chances of a slow recovery from the Covid-19 economic shock are rising,” said Joe Hayes, an economist at IHS Markit. “Without a sustained pickup in demand, manufacturing output levels will likely remain subdued.”

Alvaro Morata: Atletico are close to the level of top clubs. We beat the best team in Europe to the Champions League
Sneijder can resume his career in Utrecht
Ole Gunnar sulscher: Greenwood is much better than I was when I was 18-19
Talalaev lit up the Wings in Khimki: the players called the coach Klopp, and themselves-Liverpool from the FNL
Rummenigge on buying out Perisic from Inter: Bayern haven't decided yet
Director of Tambov that Melkadze will not play with Spartak: we do not have a free 3-5 million rubles
Juventus wanted to swap Ramsey for Ndombele. Tottenham refused
Source https://www.dailymaverick.co.za/article/2020-07-01-asias-factories-may-be-over-worst-as-china-demand-picks-up/