Emerging markets may take their cue this week from a recovery in commodities and signs China’s efforts to stem the spread of the coronavirus are working.

Gauges of stocks, bonds and currencies in developing economies all rose in the five days through Friday as raw-material prices had their best week this year. Chinese officials urged the nation to meet its economic targets for 2020 as Hubei province, the epicenter of the outbreak, reported a slowing rate of new infections.

Despite a rally since late January, emerging markets have underperformed stocks and bonds in the developed nations. That trend should soon reverse, according to Pictet Asset Management, which oversees almost $600 billion of assets.

“Valuations in emerging markets, given what’s going on, are more attractive than developed markets,” Luca Paolini, the London-based chief strategist at Pictet, said in an interview.

MSCI Inc.’s index of emerging equities rose 1.3% last week to pare its yearly loss to 0.8%. Currencies strengthened for the first time in four weeks, led by the Mexican peso, South African rand and Russian rubles. Bloomberg’s gauge of commodities climbed for the first time since the week of Jan. 3. 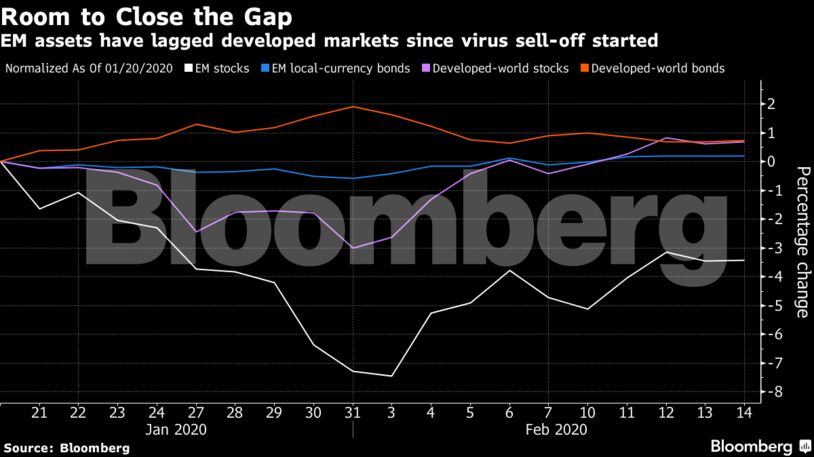 Covid-19: Deputy Minister of Health says there is currently no backlog of tests

GASTROTURF: Life in Tableau: The world from my front window

News24.com | Weather update | Thundershowers expected on what will be a cool to warm Saturday

GROUNDUP: Lottery was warned in 2014 about fraud – and yet it continued

Covid-19 tracer teams to be deployed to Umlazi from Saturday

Covid-19: Eskom concerned over increased theft and vandalism of network

Mbalula says video of a ‘bustling Polokwane’ is fake, the real Polokwane is in lockdown

Sport24.co.za | Clubs from cancelled leagues could be ineligible for Europe next season

German official says US swooped on masks at Bangkok airport

News24.com | Cele: We defend people who cannot defend themselves against themselves

Covid-19 cases reach 1,505, as Mkhize says coronavirus must be defeated at any cost

Mozambique: One Case of COVID-19 in Cabo Delgado

ISOLATION BAKING 0.2: Maverick Insiders get creative and turn to the basics

Coronavirus: Crisis can be building block for better care for street people

Will you be able to visit your COVID-19 positive child in hospital?

Helios has $350m primed for expansion after virus eases

Coronavirus: Hostels and campsites pressed into service as lockdown shelters for homeless

Pirates have plenty of arsenal to fight for trophies next season

After the storm: protesting refugees settle in to marquee life

We tried to buy cigarettes at four shops in Cape Town, and were half successful

One year later, alleged abuse at Carletonville crèche still not tried in court

News24.com | We tried to buy cigarettes at 4 shops in Cape Town, and were half successful

Covid-19: “It was my duty to make my results known”- SA Netball President

Rand continues to nosedive, reaches record lows against the dollar

How Coronavirus Is Affecting Ad Rates And Website Traffic