Business Maverick: Libor Was Largely Guesswork at the Height of Volatility in March

At the peak of the pandemic-induced market meltdown, guesswork played a vital role in setting international borrowing costs.

Transactional data used to calculate sterling Libor all but vanished as markets became volatile in March, reinforcing the case for abandoning the benchmark, Bank of England Governor Andrew Bailey said in a speech on Monday.

To set Libor, which underpins hundreds of trillions of dollars in assets around the world, banks submit market data, or — when these numbers are lacking — use their own estimates to inform submissions. That process has prompted questions about the benchmark’s accuracy, and helped fuel a years-long push to replace it.

“Over half of the 35 published Libor rates across all currencies contained no transaction-based submissions at all” during the week of March 16, Bailey said. “At the same time, Libor rates, and therefore costs for borrowers, spiked upwards based on firms’ expert judgment.” 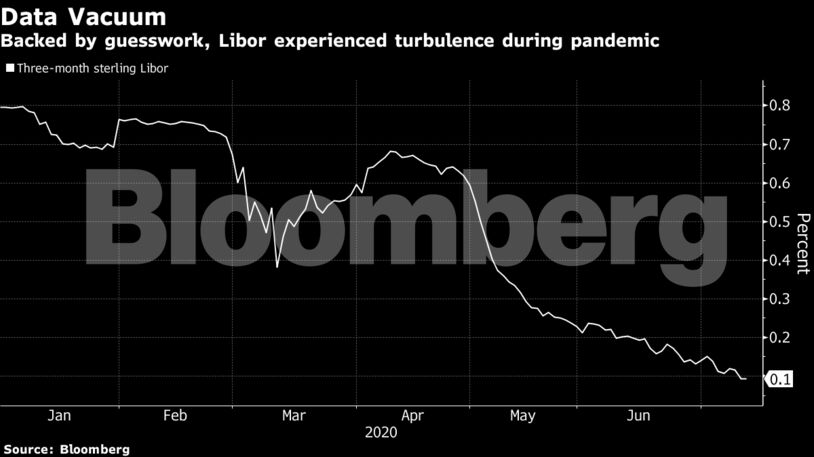 Transaction-based submissions in three-month sterling Libor dropped to zero during the week of March 16, according to Bailey.

Regulators began phasing out the Libor benchmark after European and U.S. banks were found to have manipulated rates to benefit their own portfolios, with lenders and companies supposed to make the leap over the next 18 months. Yet those efforts have stumbled as market participants shifted attention away from the transition and toward surviving the crisis.

“Despite the array of challenges we’re facing as a result of the coronavirus, transitioning away from Libor continues to be of paramount importance,” New York Fed President John Williams said, during the online Bloomberg event.

Bailey warned of a crackdown if banks don’t show they are moving away from Libor.

“We would not expect to see any further sterling Libor linked lending after the end of March 2021,” he said. “Regulated firms in the U.K. should expect their supervisors to monitor and discuss their progress with these important milestones.”

CSKA is ready to offer 7 million euros for defender Fuchs. Internacional wants 10 million^. CSKA intends to acquire the Central defender of Internacional Bruno Fuchs, who is also claimed by Monaco and Lille
Goretska Pro 8:2 with Barca: This is only the first of three steps
Matteus on the defeat of Barca: it is Painful to see what happened to the team that inspired us for so many years
Bartomeu met with Pochettino this week. He could replace Sethien at Barca
Salihamijic Pro 8:2 with Barca: Bayern are very happy, but they want more
Recently, Mueller did not want to renew his contract with Bayern. Now he's turning the football around
The baby may get angry and leave. Luis Suarez Miramontes about Messi
Source https://www.dailymaverick.co.za/article/2020-07-13-libor-was-largely-guesswork-at-the-height-of-volatility-in-march/

'We are not past anything,' says Mkhize as WHO's 'surge team' arrives