Solving the problem of the Naspers share discount is one that has kept teams of lawyers, actuaries and accountants gainfully employed for months, if not years. A new scheme will see the size of Naspers materially reduced on the JSE and may just be a step in the right direction.

The price of the companies’ shares rose just 3.1% and 2.7%, respectively, as news of the offer broke on Wednesday morning.

This is the latest in a long line of attempts to reduce, in particular, the Naspers share-price discount to the value of its internet-heavy portfolio of assets. At this point, Naspers is trading at a massive 50% discount to its value, while Prosus trades at about 30%.

A discount of 20% to 25% is considered acceptable for holding companies: 50% is a headache for management and investors alike.

In terms of the offer, Naspers shareholders will be invited to tender their ordinary Naspers N shares for newly issued Prosus ordinary shares. If the proposed transaction is fully taken up by Naspers shareholders, it is expected that Naspers’ holding of issued Prosus Ordinary Shares N will reduce from 73.2% to 57.2% post-implementation, and that Prosus will hold 49% of the issued Naspers N Ordinary Shares, providing it with a 49.5% economic interest in Naspers. 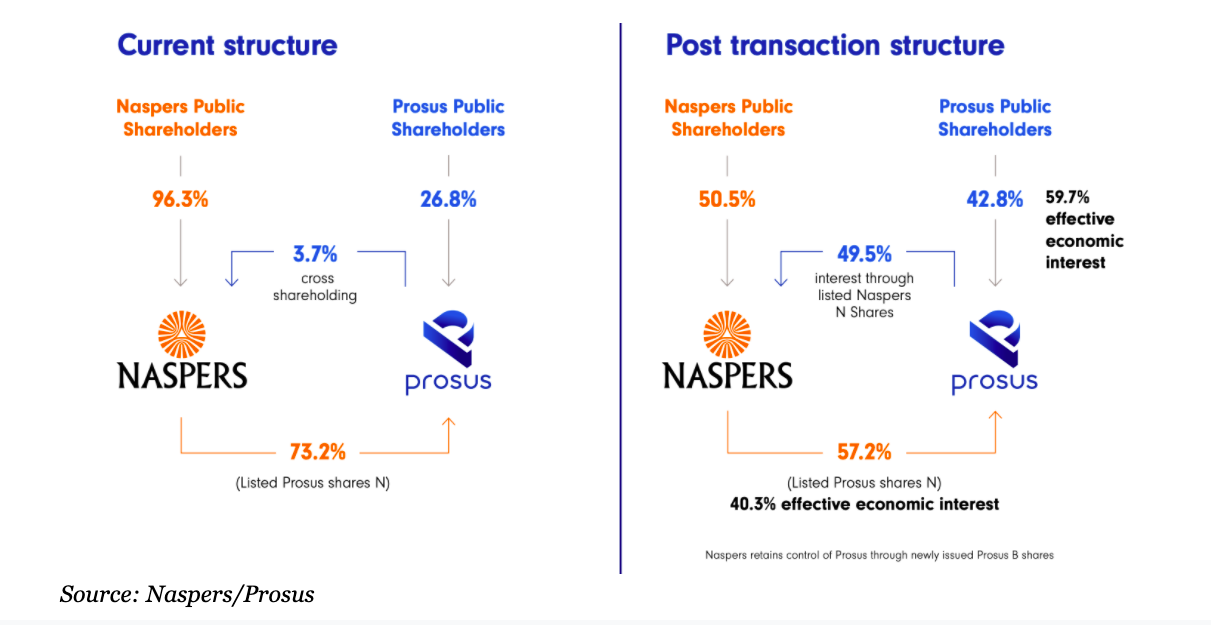 Due to the cross-holding in Naspers by Prosus, the effective economic interest of the Prosus free float in the underlying Prosus portfolio is expected to more than double to 59.7% or $100-billion.

This pushes the company into the Top 20 STOXX 50, hopefully attracting further inflows and greater liquidity.

By the same measure, Naspers will reduce in value by $50-billion, reducing its weighting on the All Share Index from 23% to 14%, says CEO Bob van Dijk. This removes the perennial problem of Naspers’ outsize weight on the JSE, he says.

“There is a strong correlation between Naspers’ size relative to JSE and the discount, because it limits the forced selling that limits share price appreciation.”

At the same time, Naspers will remain domiciled in South Africa as the JSE’s largest listed company and will retain control of Prosus.

Solving the problem of the Naspers discount is an ongoing one. In September 2019 the firm unbundled its internet stocks – including classifieds, food delivery, fintech, payments and online education, as well as its stake in Chinese media company Tencent, into Prosus (in which it retained a controlling stake), and listed on Euronext Amsterdam, creating Europe’s largest listed consumer internet company.

“This was designed to reduce the weight of Naspers on the JSE, and in the process narrow the discount,” says CFO Basil Sgourdos.

It worked for a while. But then shares in Naspers climbed by 30% in 2020, supported by Prosus’ 28.9% stake in Tencent (it sold 2% in April). As a result, Naspers’ weight has risen on the JSE and the discount is at its widest point ever.

In October 2020, Prosus announced it planned to buy back $1.37-billion worth of Prosus shares and $3.63-billion worth of Naspers shares – a process that has probably increased value for shareholders but has yet to reduce the discount.

“I think the offer is neutral to slightly positive for shareholders of both Naspers and Prosus,” says Peter Armitage, CEO of Anchor Capital. “But in the long run, I question whether it addresses the problem of how to unlock the underlying economic value within Naspers.”

Reducing Naspers’ discount requires a multipronged approach, says Sgourdos. “We are solving one known reason for the discount – Naspers’ size on the JSE. To get back to 24% of the All Share, we would have to add another $200-billion of value, so we believe this is a sustainable solution that creates value for both Naspers and Prosus shareholders.”

Paul Theron, director of private client asset management firm Vestact, was less certain. This deal, he commented, looks a bit like “two snakes which are eating each other from the rear”. The problem with the offer, as with the entire cross-shareholding structure of Naspers and Prosus, is that it is inordinately complex, he says.

“If this works, Naspers gets smaller. We will see if the local institution concentration limit issue is really what has been holding the Naspers share price back.”

The proposed transaction has already been approved by the South African Reserve Bank but requires the approval of Prosus shareholders. It is expected to be concluded by the third quarter of this year. BM/DM

News24.com | EXPLAINER | Malawi has less than 600 Covid-19 vaccine doses left: Here's how it got to this point

News24.com | The police can do better - Minister Bheki Cele after Gugulethu shooting

Production of fastest bakkie commences in the US

Covid-19 boosters will be needed yearly for most at risk, WHO says

Iconic Cape Town building to be transformed into luxurious apartments

More than 10 000 teachers vaccinated in Gauteng

It wasn’t fair, says Mpofu as he takes on ANC’s suspension of Ace

Fight for Zulu Throne: Buthelezi hits back at ’Royal Rebels’ for refusing to recognise King Misuzulu

'We cannot afford to shut down the economy': David Makhura

Land fund invests in Metrofibre to bring connectivity to the poor

Mozambique: EU Military Mission to Be Considered in July

LETTER: Rights bodies must condemn China for its Uighur abuses

I hope we don’t get used to such mass shootings on the Cape Flats, says Cele

Magashule's lawyer: His suspension infringes on his constitutional rights

Sections of Charlotte Maxeke Hospital not affected by fire to reopen: Makhura

Q&A: Mapping the world’s megacities and mining their data

Sasman says Kaizer Chiefs are ready for another battle against Wydad

Kenya: The Seven Judges Who Will Decide Fate of Building Bridges Appeal

JOEL MODIRI: Critical race theory is being attacked as need to take racism seriously can no longer be ignored

European Championship title up for grabs as main contenders wobble

White mixes things up in Bulls midfield for Pumas clash

RET or death: Is Gigaba perpetuating the faction narrative?

I’m not here to be anyone’s slave: Britney Spears on 'abusive' conservatorship

OPEN SECRETS OP-ED: South Africa’s gold rush to the data digital age: Are we prepared and are we protected?

It's war in the Zulu royal house over throne succession: Buthelezi

WATCH LIVE: Angelo Agrizzi back in the hot seat at Zondo

No consequences yet for public works officials implicated in Beitbridge saga

South Africa: Cage-Free Eggs - Good for the Chicken and Safer for You

ISS TODAY: ANALYSIS: Social media and the state: online technology challenging the rules of engagement between government and citizens

Over 4,000 pupils in Gauteng test positive for Covid-19

Coal-fired power stations can be repurposed for cleaner use

Covid-19 third wave is overwhelming many of Africa's hospitals

Euros up for grabs as superpowers wobble

Djokovic returns to Wimbledon with stranglehold on men’s game

ANTHONY BUTLER: Why jab teachers, who are at less risk than taxi drivers?

Nurković warns Chiefs: It is not over yet against Wydad Casablanca