A fire ravaged the informal settlement in Masiphumelele on 17 December 2020 leaving 4,000 people displaced. The tragedy was declared a local disaster and temporary housing units have been built on the only remaining soccer field in the area. The move has torn the community apart, leaving young people devastated without a pitch.

It’s a five-minute walk to get to the informal training soccer fields in Masiphumelele. The narrow, sandy footpath runs between low bushes and scruffy tufts of grass and the whistles and shouts of children can be heard long before the path reveals several large clearings where teams hold their daily training sessions. 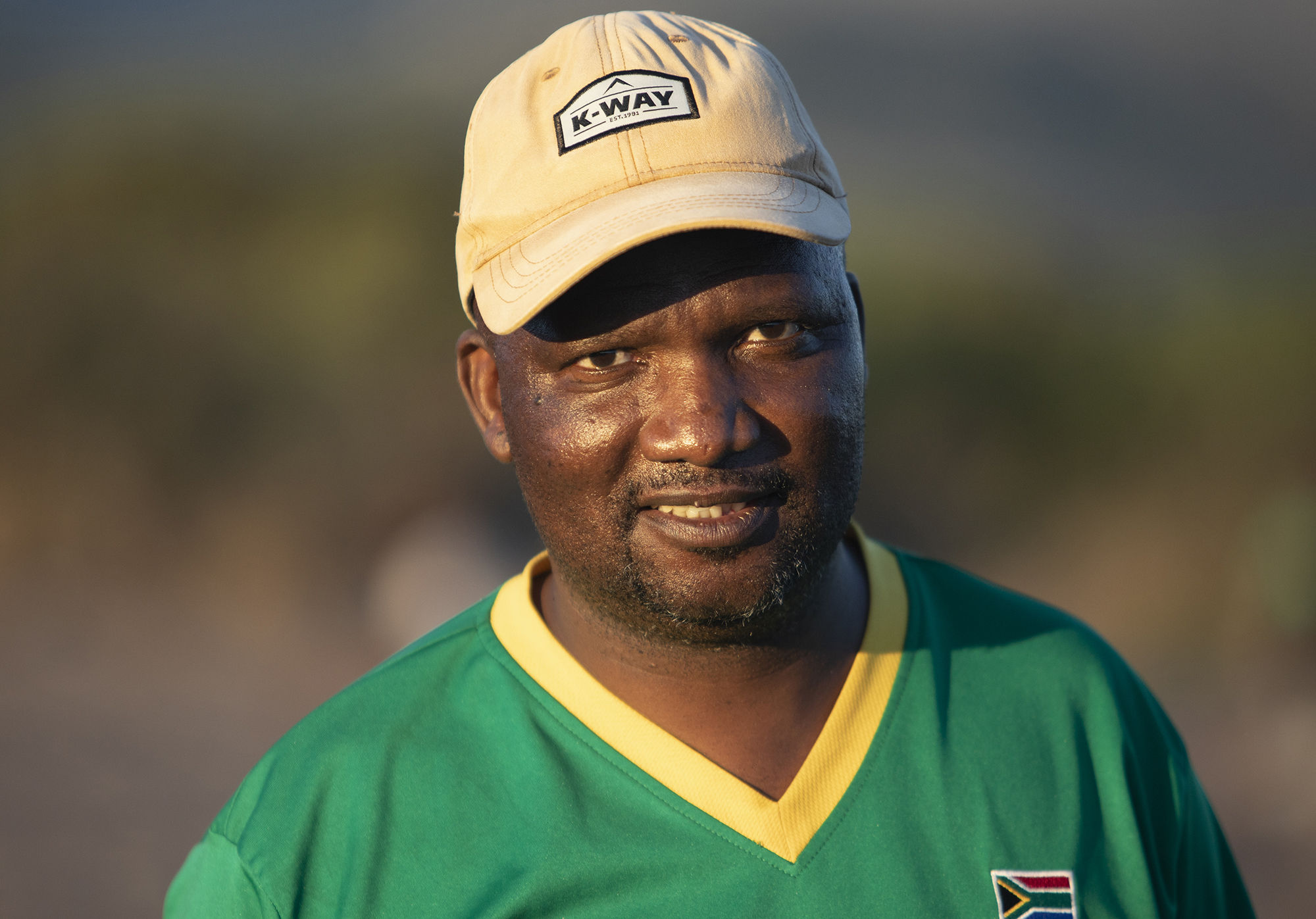 Aubrey Batala, soccer coach and youth co-ordinator is concerned that the only remaining field in Masiphumelele, which is being used for the temporary housing of fire victims, will not be returned to youth in the community who are in desperate need of recreational spaces.(Photo: Leila Dougan)

Aubrey Batala (62) is a veteran soccer coach in the area. As soon as the school bells ring, groups of kids in their school uniform rush to his home asking about their after-school training. “They call me Da Aubs,” he says laughing. “They don’t call me coach, it’s just ‘Da Aubs, are we training today Da Aubs?’”

Batala grew up in Mitchells Plain and moved to Masiphumelele in the late 1990s. He remembers when there were three sports fields where teams could practice and play.

When the City of Cape Town announced that it would use the soccer field as a temporary relocation area for those who lost their homes in the 2020 blaze, Batala says they did so without consulting sports teams and coaches in the area. Rising tensions led to violent protests over the weekend of 12 to 14 March 2021 and EWN reported that city vehicles were stoned and damaged, and roads were blocked with burning tyres and bins. As many as 350 temporary structures were torched, allegedly by residents who were trying to prevent the development. The police used tear gas and rubber bullets to disperse the crowd with bystanders and personal property hit. 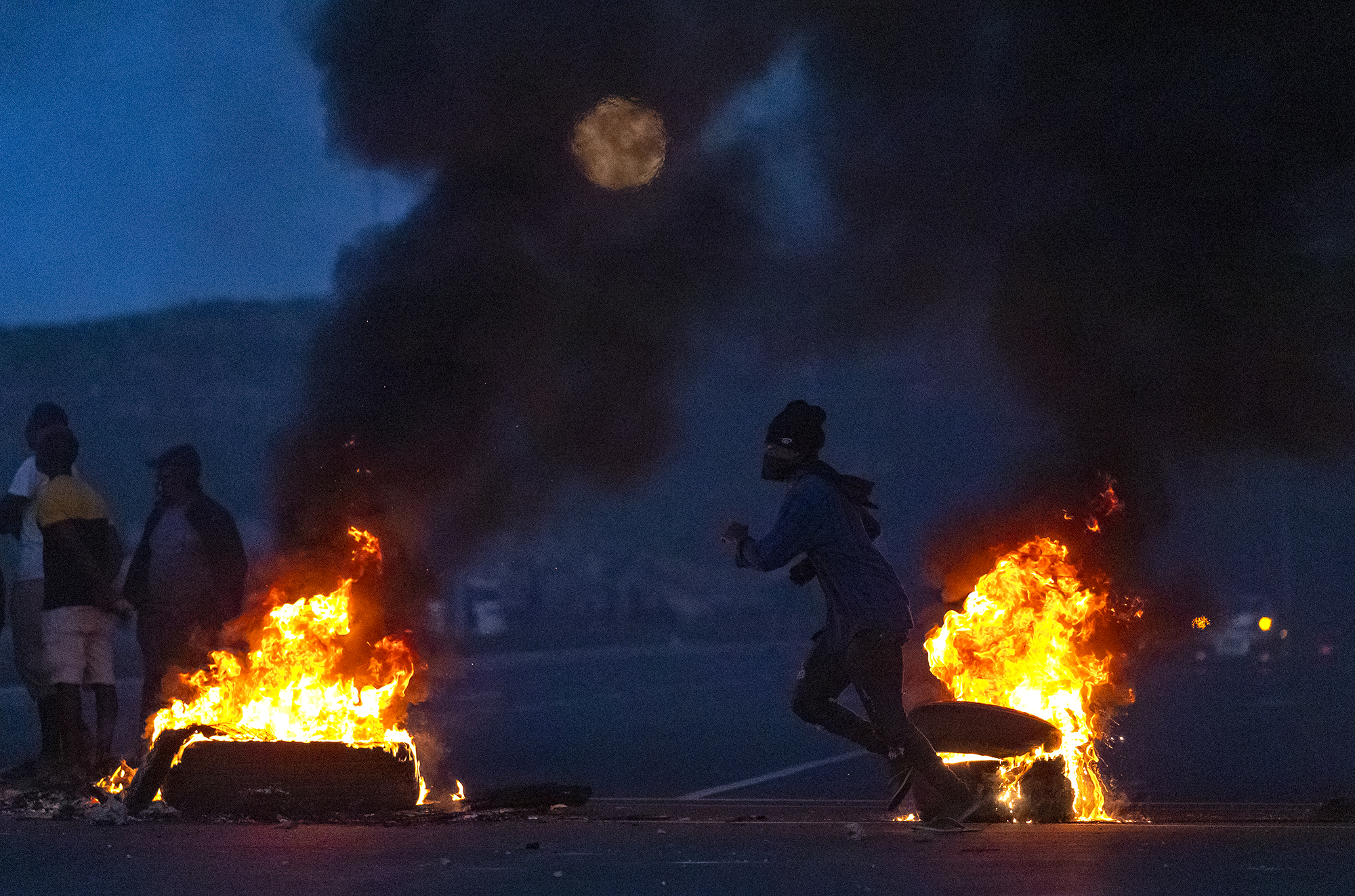 “You can’t throw stones at someone who has a gun or who is shooting rubber bullets,” says Batala. “Some of these youngsters got hurt because they were fighting with the [police].”

Since the protests, a razor-wire fence has been erected on the boundary of the field and security guards are stationed at the entrance to the site, ensuring only residents move freely while visitors are required to sign in. When Daily Maverick visited some of the houses adjacent to the field, residents pointed out windows shattered by rubber bullets during the protests. One woman forked out R240 to have her lounge window replaced. Another has simply sealed the hole with cardboard in an effort to keep out the autumn wind. 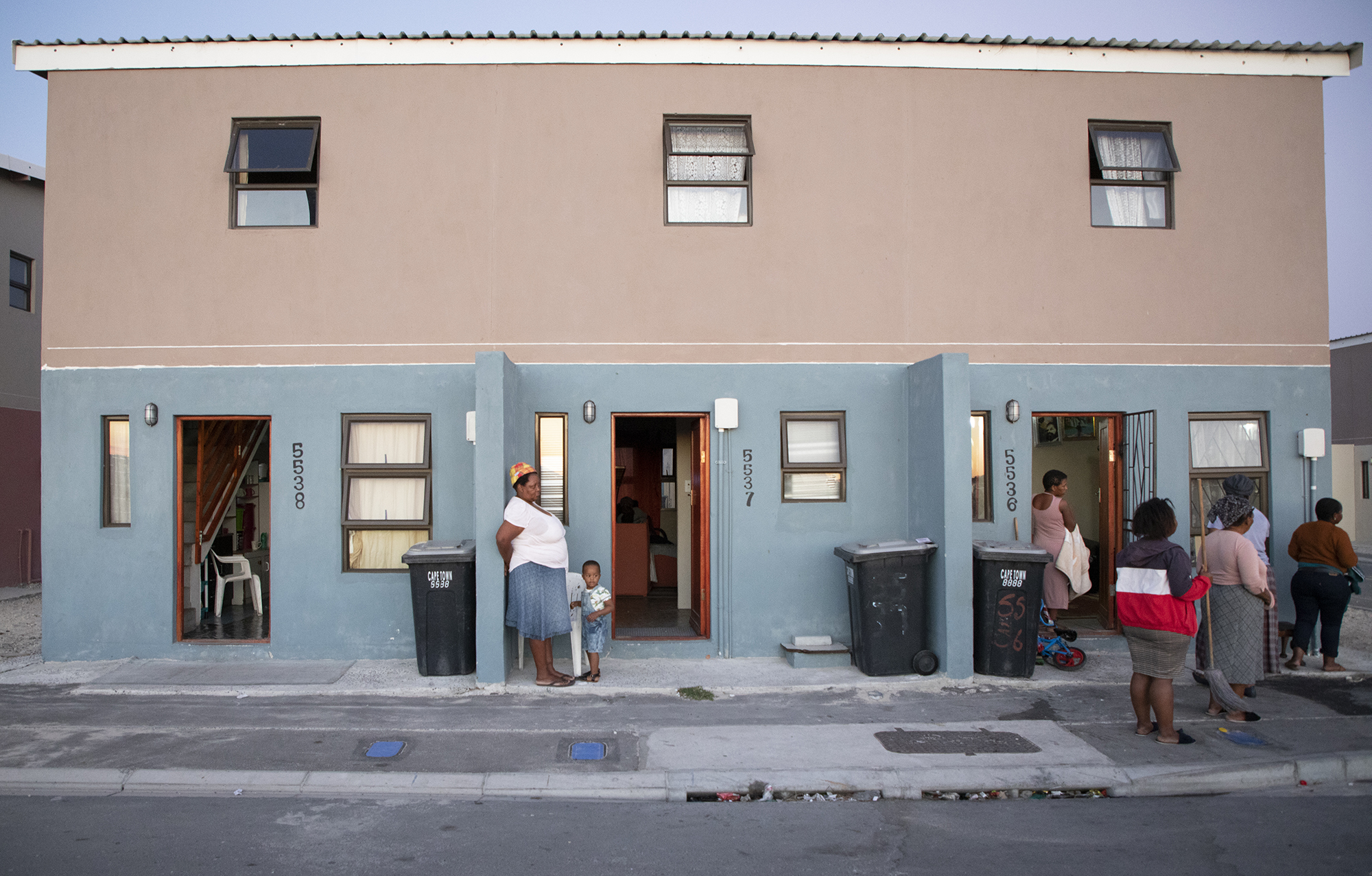 Residents in Masiphumelele who stay adjacent to the temporary relocation have complained that their windows were shattered by rubber bullets during protest action. (Photo: Leila Dougan)

On 9 April 2021, the City of Cape Town released a statement announcing that 851 temporary units had been completed for the fire victims and they would be “prioritised to receive permanent housing” to enable them to “move off the sports field as fast as possible” and the pitch to be “rehabilitated”.

Batala blows his whistle and the under 12s gather around him before removing their boots, slipping on their shoes and heading home, marking the start of the under 14 training session. Batala points out his most promising players. “The one there in the grey top,” he says. Then pointing to a group of boys, “That laaitie there, the one wearing number 10, he’s good!” Masiphumelele has its fair share of professional soccer heroes including former Kaizer Chiefs goalkeeper Luthando Sixhaso.

Batala says local teams were precious about their field, only playing formal matches on the turf, rather than wearing it out with practice sessions. Now that there is nowhere to play over weekends, too many children are left to entertain themselves. 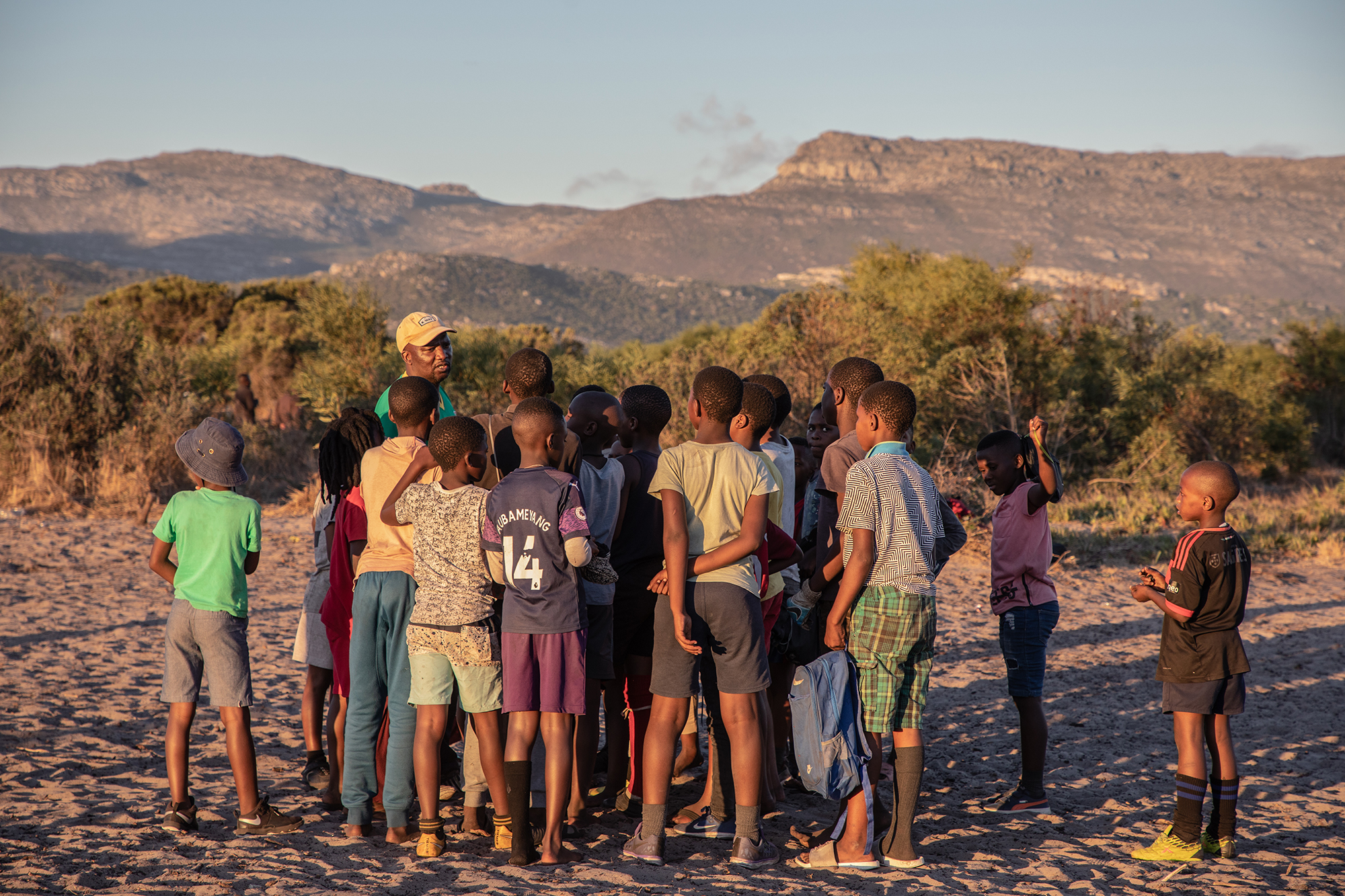 “If these boys can’t play on weekends, imagine. They end up doing all these dirty things, smoking, drinking, because they know they are not playing on the weekend. But when they are playing on the weekends they sleep at home on Friday because they know they are playing tomorrow. And when they are finished playing on Saturday they are tired, they can’t go to the shebeens. So that’s the advantage of having football in your community,” says Batala.

Coach Siyamthemba Mboxa (30) says his team is doing well. They train Monday to Friday, but not being able to play competitively on their own field means scraping together money and hiring a taxi for away games. 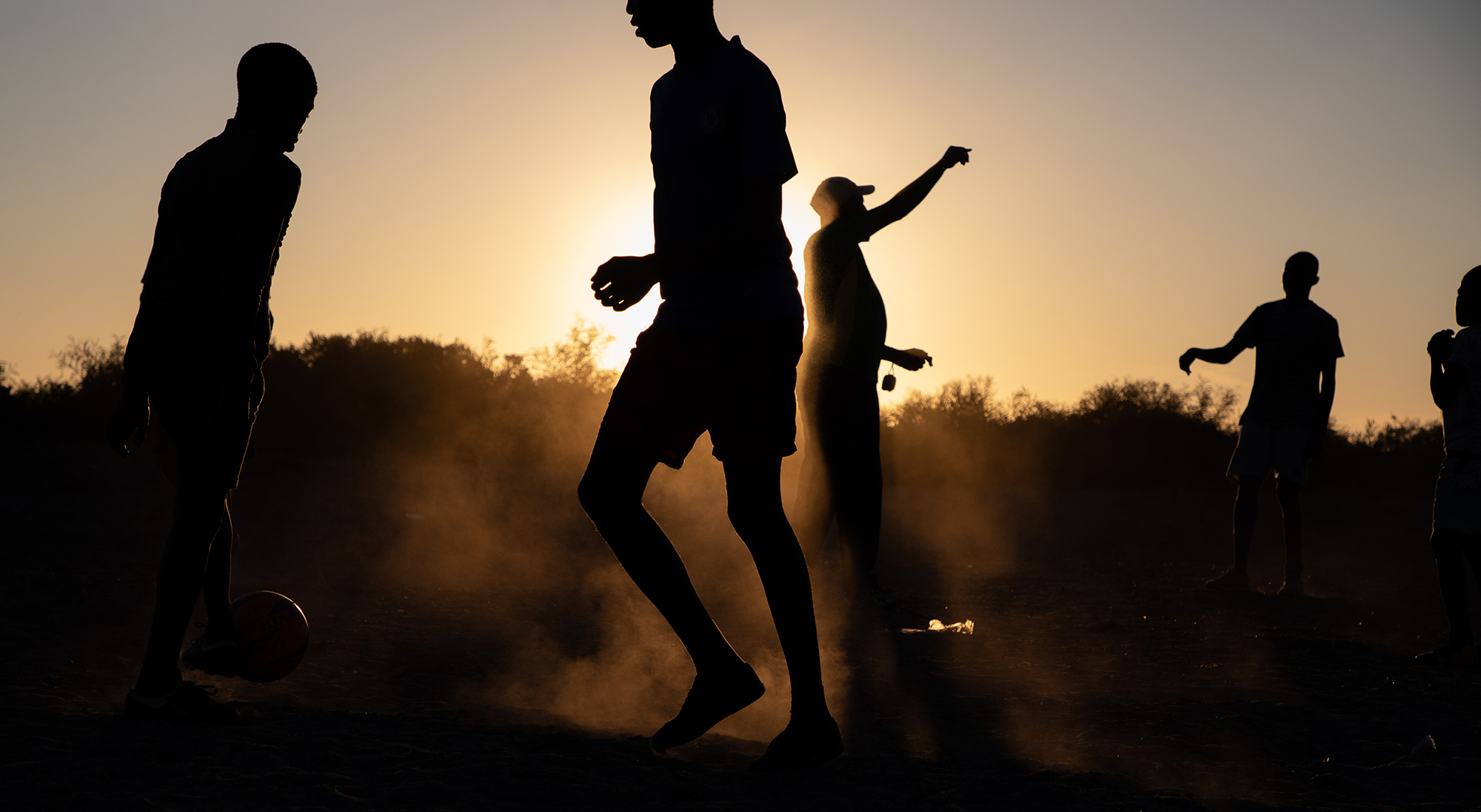 Soccer players kick a ball around in dusty areas which have been cleared for sports practices in Masiphumelele. (Photo: Victoria O’Regan)

“Transport is a problem. We don’t have funds. If we want to play in Khayelitsha we have to hire transport, we’re struggling with that. Easter there used to be big tournaments here but we didn’t play because the field is closed. We tried to organize something in Capricorn, but they say the joining fee is R2,400. I can’t afford that money,” he says.

Masande Galange (26) has lived in Masi for 11 years and coaches local kids and teenagers five days a week. His training area is accessible only by climbing into a wide ditch and scrambling up on the opposite bank. It will be impossible to cross once the winter rains come. 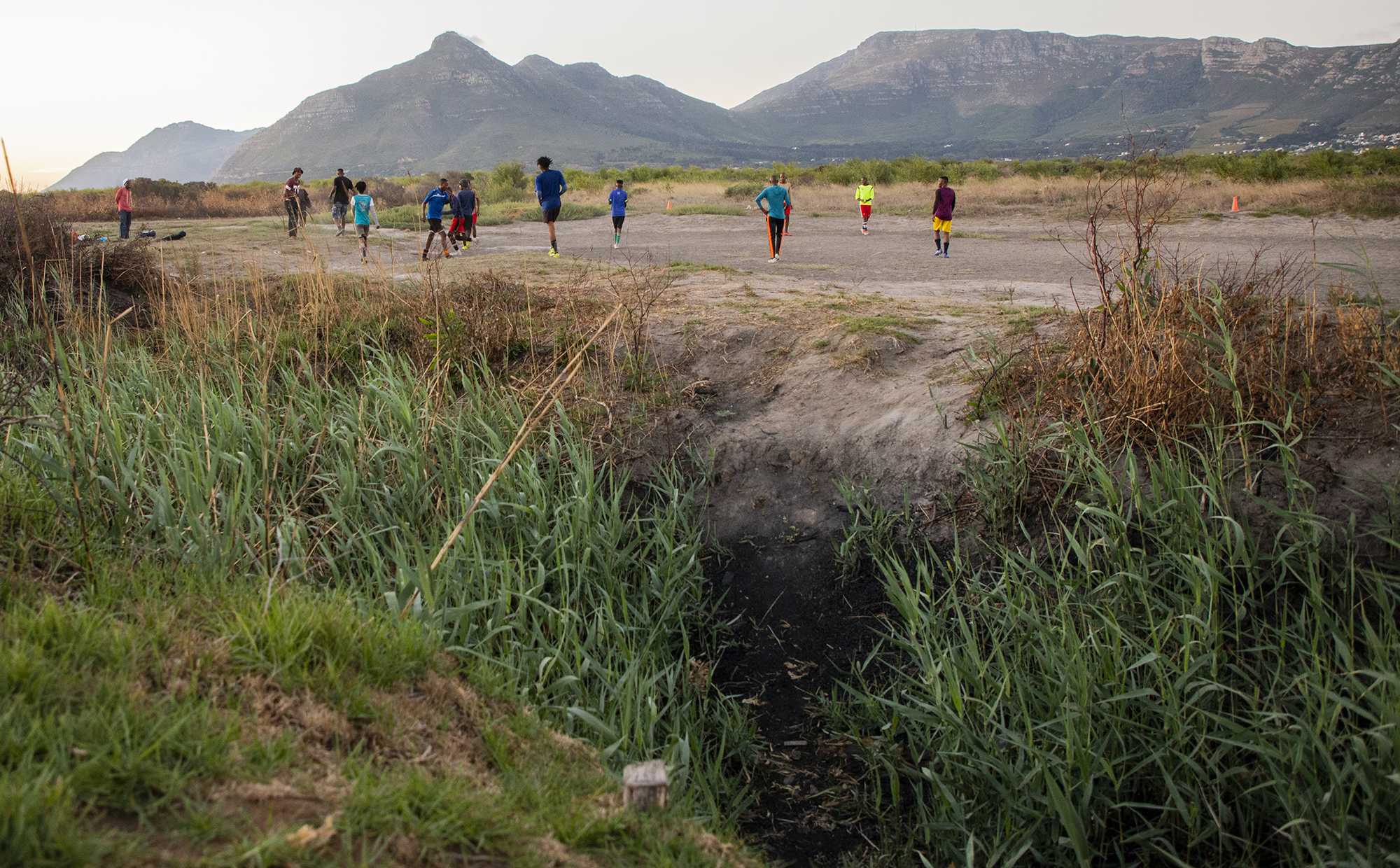 Some soccer teams have to climb through a ditch to access a cleared area where they can train. (Photo: Leila Dougan)

“We can’t practice when it rains, it’s like a dam here. I feel bad about these people [who were victims of shack fire] but I don’t think it was a good decision to take our field because to stop crime we must play there. Now all the guys, we don’t have something to do over the weekend,” he says.

In an emailed response to questions from Daily Maverick, the city’s Mayoral Committee Member for Human Settlements, Councillor Malusi Booi, said the city “invests heavily in sports and recreation facilities especially in more vulnerable communities”. The city’s Mayoral Committee Member for Community Services and Health, Councillor Zahid Badroodien said the number of participants in public spaces should be limited “in light of Covid-19 restrictions”.

“The Recreation and Parks Department also has established relationships with NGOs in the area and seeks opportunities to partner and deliver on recreational programmes in Masiphumelele,” said Badroodien. 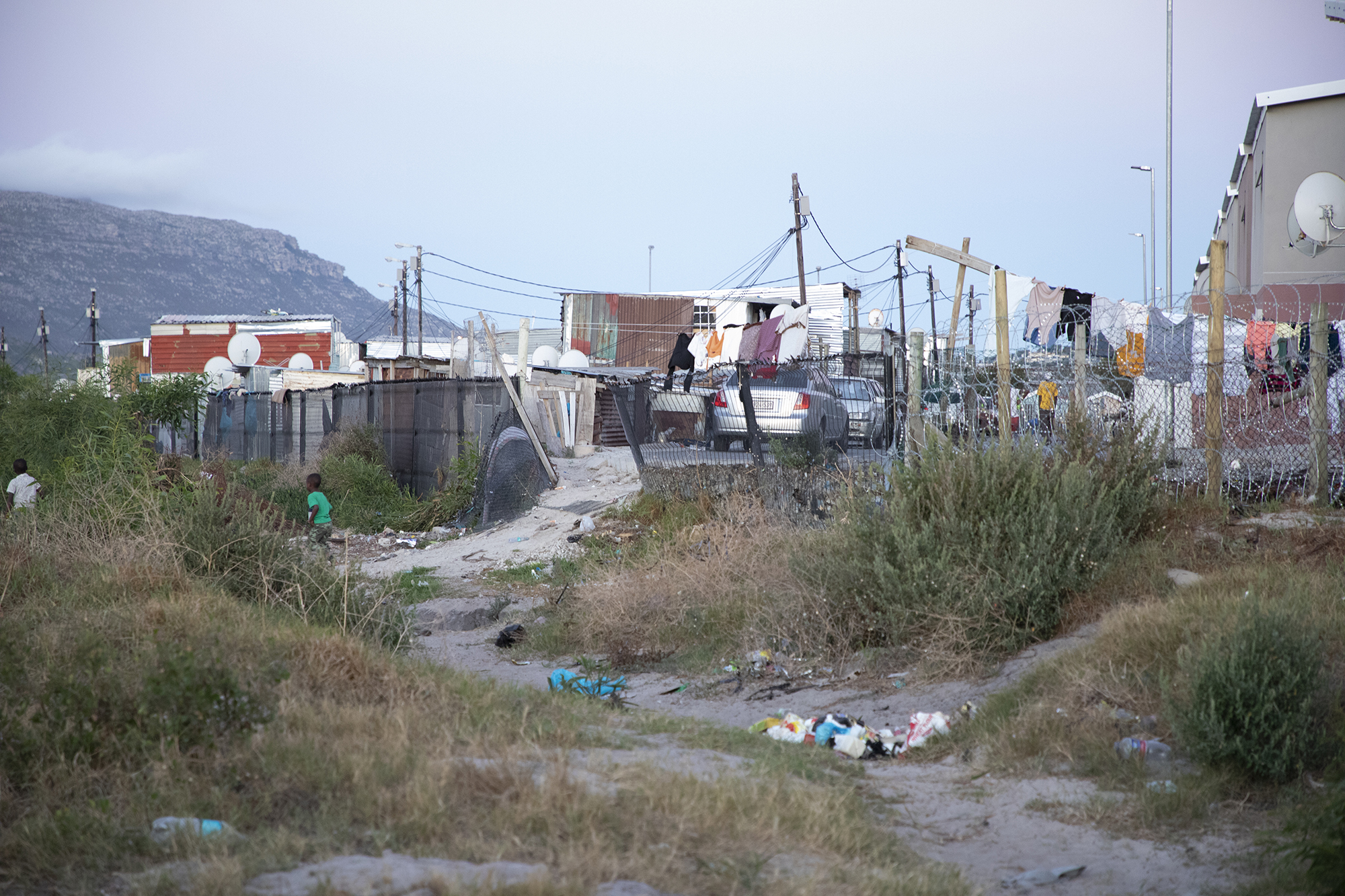 The path children have to navigate to get to the informal soccer fields in Masiphumelele. Safety is a major concern, especially once the sun sets. (Photo: Leila Dougan)

According to Marcellino Martin, spokesperson for the MEC for Human Settlements in the Western Cape, the department is working with the City of Cape Town to conclude relocation plans to “free up” the soccer field. But construction of permanent units for the fire victims can begin only after the City of Cape Town has “obtained the statutory approvals expected in October 2021.”

Martin says the City of Cape Town will be responsible for the clearing and refurbishment of the sports field once the residents have all been allocated permanent homes, but Batala is not holding his breath. 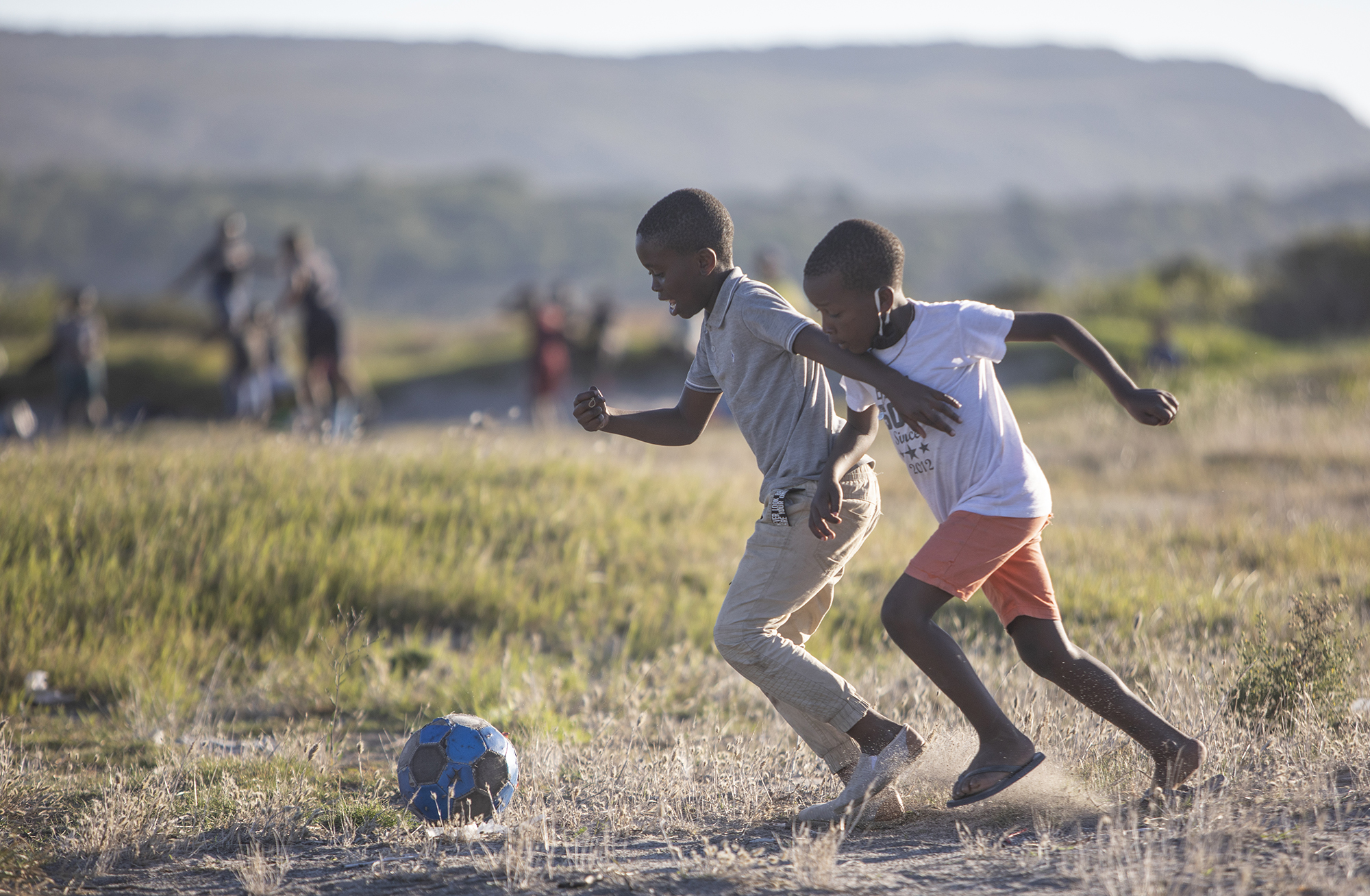 “Nobody has a time frame for how long they’re going to be there. It’s over, there’s nothing you can do. This is the situation,” says Batala, who insists that the effects of the field being closed are already showing.

“These laaities don’t have anything to do which means they will do naughty things in the evenings. I saw another one, he’s 12 years, he was smoking. He said, ‘What can I do Ta Aubs? You give away our sports field, what am I going to do? I rather smoke.’ Just like that.” DM

Substation vandalism plunges parts of Soweto in the dark

Call for restrictions amid fears of Covid third wave

Escaped cheetah makes her own way back to reserve in Pretoria

Nigeria: A Second Wave Is On, but the Classroom Door Stays Open

Nigeria: I Lost My Pregnancy in Captivity - Freed Kaduna Student

On the rebound: Agencies polish up ‘pre-post-pandemic’ relationships

COVID-19 LIVE UPDATES | Can SA contain the further spread of the two Covid-19 variants of concern?