Covid-19: Sanitation is a struggle in Kleinbegin, in the winelands 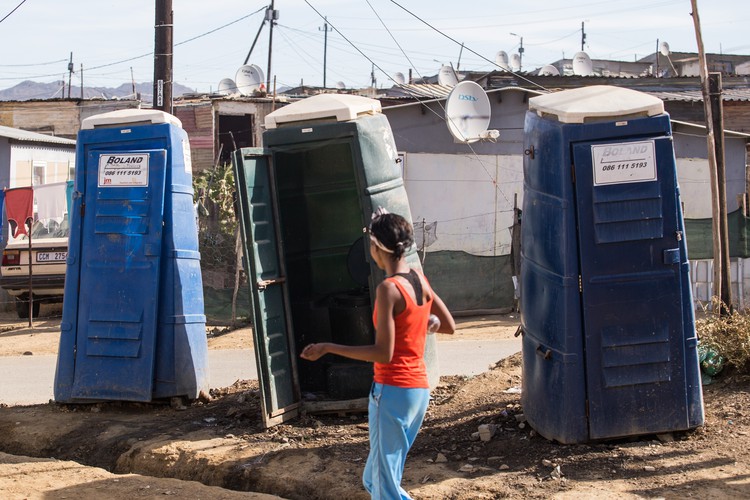 Living conditions at the informal settlement have only got worse over the years, says a resident who has lived in Kleinbegin for seven years. Photo: Ashraf Hendricks

It is a Saturday afternoon in Kleinbegin informal settlement, Tulbagh, and people sit together outside their homes. A group of men huddle around a table playing cards. Children play in the road. Nobody is wearing a mask.

Winston Pietersen, coordinator of Tulbagh neighbourhood watch, says they are struggling to get the community to adhere to social distancing. “After 8pm there’s supposed to be no one in the streets, but the streets look the same as during the day. Children are out playing in the streets as if nothing is happening in Tulbagh.”

A stench of excrement hangs in the air. The portable toilets are clogged with human waste, and it streams down the street.

“There aren’t enough toilets for the number of people who live here. Our streets are a mess. It stinks in Kleinbegin; the whole informal settlement stinks,” says Mina Jantjies, who has lived here for seven years.

Home to nearly 400 people, Kleinbegin is one of seven informal settlements under Witzenberg Municipality: Pine Valley, Chris Hani, Mooiblom, Zibonele, Polo Cross and Die Gaatjie are the others.

One toilet serves about 21 people in the informal settlements, with an average shortfall of 37 toilets per settlement, according to the municipality’s 2019 Spatial Development Framework.

“The municipality hardly comes to clean the toilets. Last week, we had to clean it ourselves. It’s not our responsibility,” says Jantjies.

But municipal Director of Technical Services Joseph Barnard says the toilets are serviced weekly. “All toilets which are on-site are chemical toilets, are serviced twice weekly by the appointed service provider.”

“The municipality do not clean the toilets; they only empty them,” says Gerrit Koopman, a resident since 2012.

He says residents resort to using buckets at home and empty them into the toilets.

Residents said the municipality promised to deliver extra water tanks and sanitise the streets, but this has not been done.

“We asked the municipality to install water tanks throughout Witzenberg. They said there are enough water tanks for Nduli, Wolseley and Ceres and Tulbagh, but so far not one water tank has been delivered in Tulbagh,” says Pietersen, who is also vice-chairperson of the Community Police Forum and leader of the Witzenberg Justice Coalition in Tulbagh.

But Barnard says the municipality is compliant with the standards required by government regulations for RDP water and sanitation services. However, he said that plans are currently underway to install two water tanks in Jooste Street, Kleinbegin.

As at 18 May, there were 206 confirmed Covid-19 cases in Witzenberg. 70% of Witzenberg recorded cases had recovered, Premier Alan Winde said on Sunday.

Mourinho on son and Lloris clash: It's beautiful. If you want to blame someone, it's me
Real Madrid players will refuse bonuses for all the trophies they win this season
Barcelona are confident that they will sign Lautaro by October. Inter wants 90 million euros and one player
Aitor Karanka: If there is a team that can win back against Manchester City, it is real
Juventus and Atletico have started talks about the transfer of Lacazette. Inter are also Interested in him
Rangnik agreed to take charge of Milan from the 2020/21 season. He can also take the post of sports Director
Ocampos did everything for the victory of Sevilla: first he scored, and then he put on a goalie's Jersey and in the 101st minute dragged the kick of the goalkeeper Eibar
Source https://www.groundup.org.za/article/winelands-informal-settlement-demand-water-tanks/

Mkhize to brief MPs on govt's response to COVID-19 pandemic

Mkhize: Hard lockdown was one of best decisions we took

Harry and Meghan speak out against racial bias: We can only move forward if we acknowledge the past

Constitutional vote 2020 reflects the evolution of Russian society and statehood

Outcry over assault of Maties medical student, her co-student suspended

News24.com | Proteas' extended squad is far from being a simple animal to manage

Two arrested for possession of human leg, knee and placenta

News24.com | 'We trust the teachers with our children's lives' - East London parent

City of Joburg gets Friday deadline to table overdue budget

The day I slept with an alien

Illicit diamond dealing case of Kimberley businesspeople can go ahead

Newsdeck: Coronavirus survivor Tom Hanks does not ‘have much respect’ for people who shun basic precautions

Think Piece: Makwetu speaks into a void, as graft won’t be tackled

Video: Motshekga finds herself in a Catch-22 Covid-19 problem

Business Maverick: What will it take to improve SA’s private sector investment climate?

West Africa: How to Step Up the Fight Against Boko Haram

MAVERICK CITIZEN: From telescopes to ventilators — how the country’s engineers and designers have retooled for the Covid-19 crisis

SPOTLIGHT: Covid-19: Palliative care is needed now more than ever

BUSINESS MAVERICK: The economic consequences of Covid-19 may long outlive the pandemic

OUR BURNING PLANET OP-ED: Covid-19: A terrifying glimpse of a future where overpopulation and climate crisis overwhelm Earth

OPINIONISTA: Pesticides and chemical fertilisers are the silent killers in our food chain — and they’re wiping out wildlife

OPINIONISTA: Future-proofing schools to face reality of teaching during Covid-19

OPINIONISTA: Africa is the most genetically diverse continent, and yet it is ignored in new drug research

OPINIONISTA: The wild economy: Changing the way we see and use wildlife and natural resources

OPINIONISTA: We hope universities will learn from the lockdowns

News24.com | Benoni, Vosloorus, Nigel and other areas to wake up to load reduction

News24.com | Benoni, Vosloorus, Nigel and other areas due to wake up to load reduction

Covid-19 has made it impossible to recruit police trainees, parly hears

News24.com | 'We haven't made a cent': After months without income, wine tour operators fear for their future

Limpopo parents barricade school gates during phasing in of other grades

News24.com | Covid-19: Recruitment of police trainees grinds to a halt

Backlog in elective surgeries for children due to Covid-19 pandemic, lockdown