DM168 SAPS IN CRISIS: Sullied saga: The intrigue that litters the path that ends with top cop Jeremy Vearey’s dismissal

Following the paper trail of cop complaints raises questions about corruption in the police service.

They demanded that corruption within the South African Police Service (SAPS) be staunched and held posters saying #justiceforjeremy. Some posters said: “Ons is die moer-in [We are angry].”

These slogans were in reference to a Facebook post and others that Vearey made – and for which he was controversially dismissed at the end of May.

In one of Vearey’s posts, he said: “Moer hulle [Beat them up].” Some police officers viewed this as threatening and translated the two words to “f**k them”, whereas Vearey countered that in Afrikaaps, the language he used, it was not a derogatory phrase.

His dismissal led to several of his supporters, who also back his close allies in the police service, to gather outside Parliament and police stations on 9 June to demand clean policing and Vearey’s reinstatement.

What’s it all about?

What really happened in the lead-up to all this?

One strand of the messy saga seems to involve WhatsApp messages.

On the evening of 25 February this year, Brigadier Vish Naidoo, the national police spokesperson, received WhatsApps that appeared to be screengrabs of some of Vearey’s Facebook posts. These messages to Naidoo were apparently from a Crime Intelligence officer in the Western Cape.

Reference to these messages is contained in a sworn statement made by Naidoo on 10 March, 11 days after receiving the texts. In his statement, Naidoo said that it appeared Vearey had violated the police service’s code of conduct. 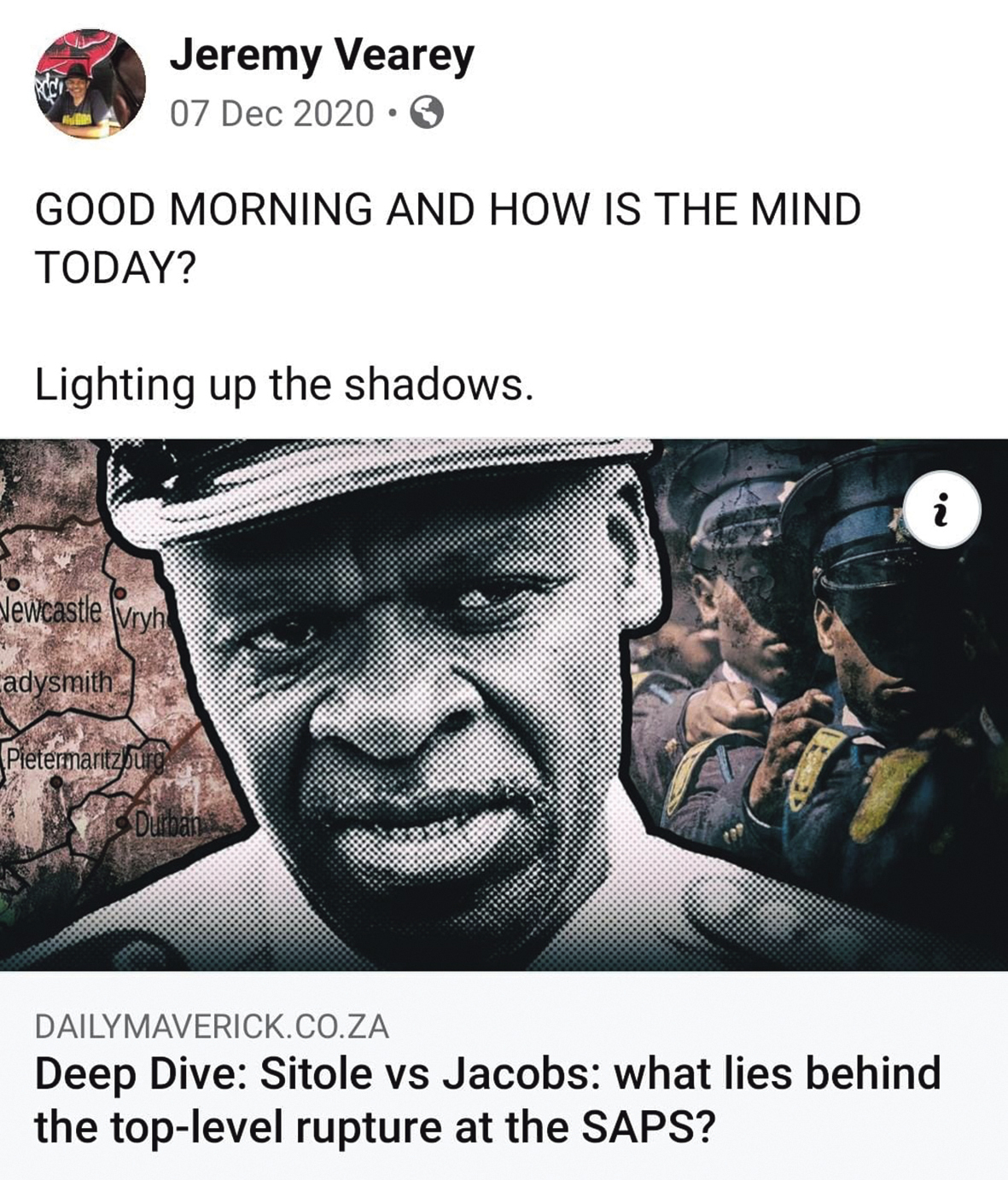 At face value, it appears that, as national police spokesperson, Naidoo was duty-bound to highlight acts viewed as bringing the police service into disrepute.

But here’s where it gets intriguing: in his statement, Naidoo said he had received the screengrabs of Vearey’s posts from a Western Cape Crime Intelligence officer.

Lieutenant-General Peter Jacobs was previously head of the Crime Intelligence in the Western Cape but was controversially transferred in June 2016, along with Vearey, while they were investigating how police members were funnelling firearms to gangsters.

In 2017, Vearey went on record to claim  that Crime Intelligence cops, along with suspects, were working together to discredit him and derail investigations.

Towards the end of 2018, Lieutenant-Colonel Charl Kinnear also complained to his bosses that police service members who had links to Crime Intelligence in the Western Cape were allegedly working against him and colleagues, including Vearey and Jacobs.

Jacobs, by that point, had been promoted to national Crime Intelligence boss. (Kinnear was assassinated in Cape Town on 18 September 2020.)

Jacobs labelled the group Kinnear had complained about as a “rogue” unit and recommended it be disbanded.

This did not happen, implying that there was a counter-version to what Jacobs, Vearey and Kinnear had said, or that there was no will or basis to deal with their assertions. 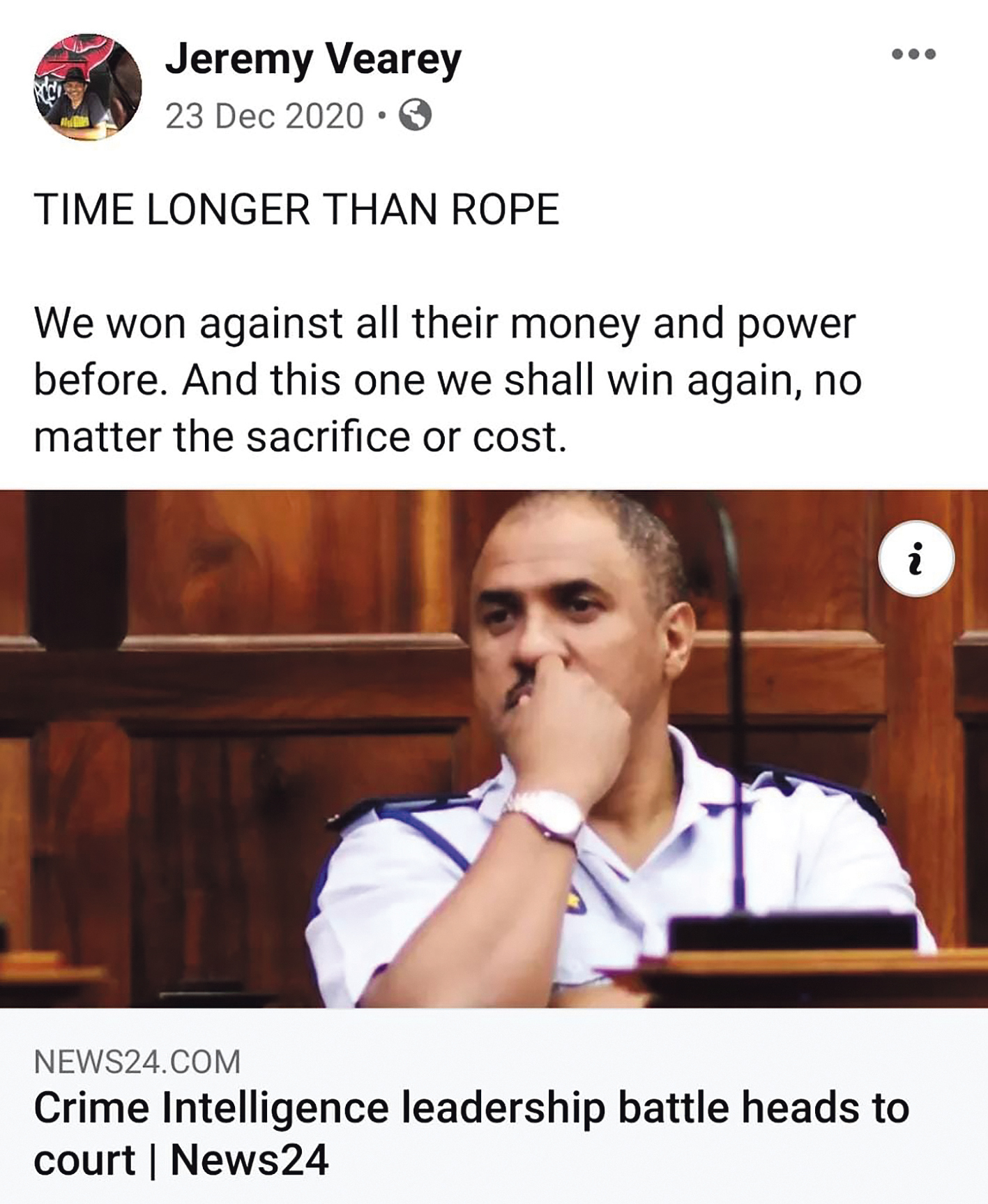 The path to Vearey’s dismissal merges with what recently happened to Jacobs.

The Jacobs disciplinary hearing related to allegations of irregularities in the procurement of personal protective equipment (PPE) that involved the secret service account.

Jacobs brushed off the allegations as baseless and countered that he had uncovered suspected fraud linked to the secret service account, allegedly committed by fellow Crime Intelligence officers.

Some police members viewed the disciplinary action against Jacobs as an attempt to sideline him and steer him off investigations.

This saga – the first of two disciplinary actions Jacobs was recently the focus of – unfolded from late last year to around March this year, when he was transferred from Crime Intelligence to head the police’s Inspectorate division, which some cops viewed as a demotion.

Back to the Vearey disciplinary hearing. Major-General JP Scheepers (who was once, like Vearey, an applicant for the job of Western Cape police commissioner) said that on 8 March this year Sitole had appointed him to investigate Vearey’s “alleged misconduct” relating to Facebook.

These details are contained in a document on Scheepers’s findings, dated 15 March, which DM168 has seen.

Jacobs was Vearey’s employee representative in the Facebook case.

This goes deeper: Scheepers said Vearey’s Facebook posts linked to news articles about the PPE disciplinary that focused on Jacobs.

The posts were made between 7 December last year and 5 February – a period roughly coinciding with the first set of disciplinary and related actions against Jacobs.

“In response to the disciplinary proceedings initiated by [Sitole] against … Jacobs, the printed and social media published many articles about the incident and disciplinary process as it unfolded,” Scheepers said.

“Vearey then, in response to these media articles, allegedly published certain comments on his Facebook page. He did not have any permission to post those Facebook comments, and these comments allegedly brought the name of the employer into disrepute.”

That meant that, in a sense, the attempted PPE-focused disciplinary hearing into Jacobs ended up being a stepping stone towards the disciplinary against Vearey.

Evidence in the Vearey-focused disciplinary action, Scheepers said, was in the form of written statements from Naidoo, as well as Ledwaba and Vuma – the two officers involved in dealing with the Jacobs PPE matter.

According to Scheepers, Vuma had received threatening messages in February, including via WhatsApp and social media from various people, and “realised that these people are serious about attacking her and [Sitole]”.

In the case of Ledwaba, Scheepers said “when [Ledwaba] became aware of the Facebook postings by Major-General Vearey, he felt threatened, intimidated and unsafe”.

Scheepers found, among other things, that: “The social media posts by Major-General Vearey clearly display evidence of serious ill-discipline, his total disrespect for top management officers in the SAPS, his total disregard for prescribed processes within the SAPS, and his public rejection of peace and stability within … South Africa.”

He also recommended that an urgent safety risk assessment be conducted to ensure the safety of Sitole, Vuma and Ledwaba: “I am convinced that there is a serious and imminent potential risk that may endanger their lives or cause serious harm to them.”

This indirectly loops back to the situation Kinnear faced – and the claims about Crime Intelligence. When threats were picked up in his case, Kinnear had not wanted a risk assessment done on himself, because, according to an affidavit by Jacobs in a labour court matter, Kinnear “refused to participate as he did not trust the SAPS and Crime Intelligence”.

Disciplinary with ‘no impartial chair’

In an exclusive interview with Daily Maverick on 2 June, Vearey said the process that had led up to his dismissal was “outside our disciplinary code” because he had not been given a chance to interrogate evidence.

Indeed, in Ntshinga’s findings on the disciplinary, she referred to a section of the SAPS Discipline Regulations of 2016. She said an employee charged with misconduct under a section of Regulation 9 had to appear at a meeting and not a disciplinary hearing.

Ntshinga also said Sitole “had invoked the provisions” under another part of Regulation 9 by appointing her to deal with the matter by means of an expeditious process.

An expeditious process is a condensed form of the usual disciplinary procedure that does not involve witnesses being called to testify or be cross-examined.

Vearey previously told Daily Maverick that “my version was not tested against the version of others” during the disciplinary hearing.

On 27 May, Ntshinga decided that Vearey should be dismissed. Sitole signed off on this the next day.

It may be an issue that Sitole appointed a police member to investigate Vearey’s Facebook posts, someone who subsequently recommended a safety risk assessment be conducted on, among others, Sitole himself, who then rubberstamped Vearey’s dismissal.

This could all be seen as conflict of interest in the case of Sitole and around whether he impartially signed off on Vearey’s dismissal if he was seen to be targeted by Vearey.

The Police and Prisons Civil Rights Union was dealing with the matter on Vearey’s behalf.

Meanwhile, given Vearey, Jacobs and Kinnear’s previous claims about crooked elements with links to Crime Intelligence, it is interesting to note that Western Cape Crime Intelligence reportedly recommended increased police visibility to prevent disruptions at the pickets held this week in Vearey’s support. DM168

Iran warns against any action over tanker attack

Read it now: Your daily Love Horoscope for 03 August 2021

News24.com | Covid-19: No strings attached to donation of millions of Pfizer vaccines, says US govt

ANALYSIS: The SACP at 100: Party with a rich history faces an uncertain future

MTN shares bounce as threat of US anti-terror case recedes

OP-ED: Beating the counter-revolutionaries: South Africa’s people are the ultimate defenders of democracy

BUSINESS MAVERICK: MTN gets some respite in the US, paving the way to focus on its African strategy

OPINIONISTA: Time to bring Africa in: The case for a G21 — with the African Union added

OPINIONISTA: The true value of the mining sector in South Africa

OPINIONISTA: A Mamelodi memoir: How Frank Chikane champions democracy in his unique way through the ages

OPINIONISTA: What about the workers? The public sector wage agreement was signed without grassroots consultation

Octogenarian Julia Albu, who travelled across Africa in an old Toyota Conquest, dies at home

The Most Influential Trader In Crypto, Sam Trabucco, Works With FTX Exchange: Some See Manipulation

Man on murder charge after girlfriend killed with axe

World: At least 30 bodies float down river between Ethiopia’s Tigray and Sudan

Paneer – Make your own luxurious Indian cheese at home

South African bobotie – The dish that never fails to please

Shona Ferguson to be laid to rest on Wednesday

Shona Ferguson to be laid to rest in a private ceremony

Many underinsured small businesses are still not open

Life Esidimeni inquest postponed to give lawyers time to prepare

OP-ED: We need a wake-up call as South Africa falls victim to the Dunning-Kruger effect

COVID-19 stats: Cases continue to decline, deaths up by 246 on 2 August

Fairvest to internalise its management company

Bad news for the poor, as household food basket survey shows another increase

NATIONAL ARTS FESTIVAL: Embark on a week of psychedelic dance

#Sama27: Matthew Mole on winning Record of the Year [watch]

NEIL MANTHORP: New Cricket SA CEO has a whole lot of loving to do

Wheels of justice for Life-Esidimeni families grind to another halt

Maverick Life OP-ED: Digital demise: What happens to your online self once you die?