Benji Daniel and Alex Burger know how to win big regattas, but have faced nothing as big as the Olympics. The South African pair will go into the competitive 49er class in Tokyo as complete underdogs.

They were crowned world champions in 2017. Four years later, South African sailors Benji Daniel and Alex Burger are poised for their maiden appearance at the Olympic Games. They hope to build on this latest milestone.

Benji Daniel and Alex Burger know how to win big regattas, but have faced nothing as big as the Olympics. The South African pair will go into the competitive 49er class in Tokyo as complete underdogs.

The duo was recently confirmed by the South African Confederation and Olympic Committee (Sascoc) as among those who will represent South Africa at the 2020 Olympic Games in Japan. That was one hurdle cleared.

For the pair, who currently sail in the 49ers class, the opportunity to represent the country at the quadrennial sports spectacle is something they savour and are excitedly looking forward to. Especially considering that it almost did not happen.

“We were hoping to qualify in April 2020, when the Olympics were set to take place last year. When the Olympic games were delayed by a year it struck pretty hard,” Burger (24) told DM168.

“When they were postponed, it was pretty shocking and an unprecedented thing to have happened. Sitting through lockdown and wondering if something you’d worked towards for years is going to happen was certainly tough,” added Daniel.

The duo, coached by two-time SA Olympian Asenathi Jim, are certainly underdogs among a fleet of superstar sailors, including Kiwi pair Peter Burling and Blair Tuke, who guided Team New Zealand to glory at the 36th America’s Cup in Auckland in March. 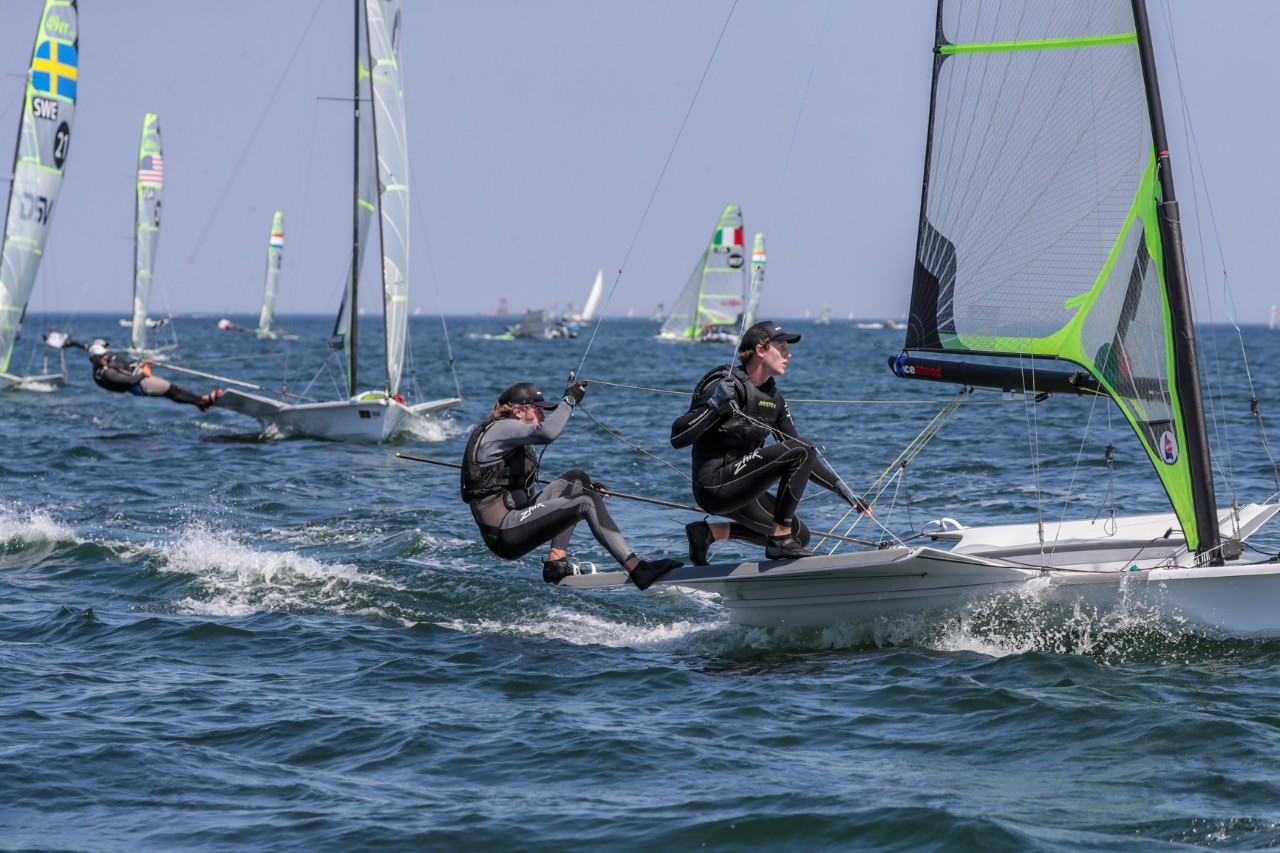 South African sailors Alex Burger and Benji Daniel expect a tough challenge when they compete with some of the world’s best sailors at the Olympic Games. (Photo: Liesl King)

The South Africans’ almost anonymous status will allow them to focus on doing what they need to do with minimal scrutiny. As a result they hope for an upset or two in Japan.

“We have competed against them [Burling and Tuke – who are also the reigning Olympic gold medallists in the class] before,” Burger told DM168. “So, we kind of have an idea of how good they are and where they stand. We are a much lower ranked team. So, what we do have on our side is that there isn’t really an expectation for us to get a really good result.

According to Daniel, to notch up a race win during the competition, which is set to take place at the Enoshima Yacht Harbour in Fujisawa City, is one realistic target they have set for themselves.

“We haven’t set a number [of where we want to finish]. But a goal of ours is to try and win a race at the Olympics. Our event consists of 15 races and we want to try and win one of those,” 20-year-old Daniel said.

Although Burger and Daniel were not able to be in the water and sail during South Africa’s hard lockdown, they kept active and fit using home gym equipment they had acquired just before the lockdown.

The pair says when they could finally set sail again, they had minimal struggles and were just happy to be in the water once more.

Watching their prospective opponents continue to sail and improve while they sat at home was tough. “From March 2020 until December 2020, I struggled the most in that period knowing that I couldn’t do anything, but our counterparts in Europe, the Americas, Australia and New Zealand were all continuing to train in some way,” said Burger. “I struggled more with that than the transition of being able to start again. We were so excited to start again, and so relieved that we could continue training and start travelling.” 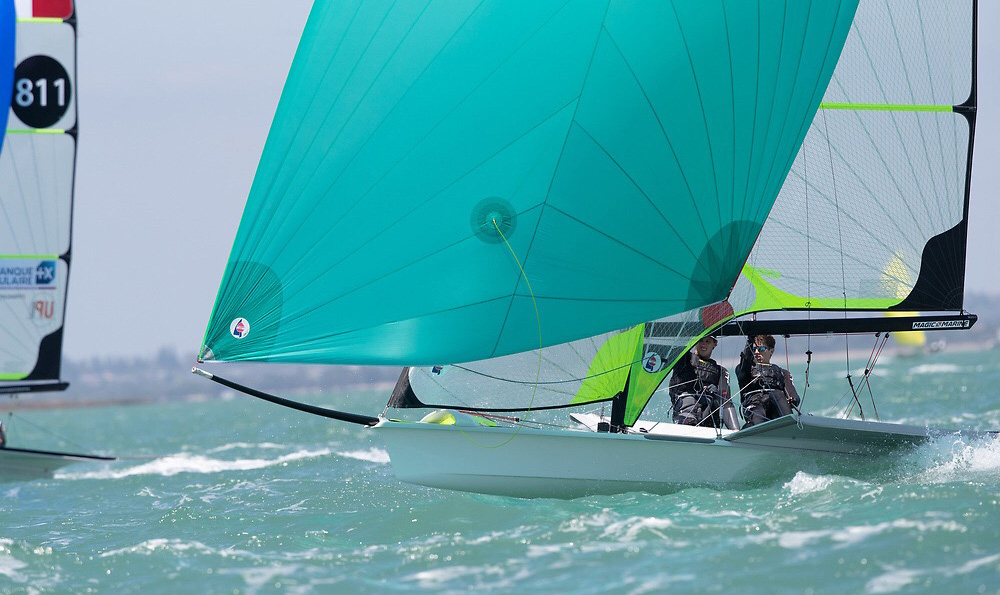 The 2017 world champions in the 29ers class, which consists of smaller boats than those sailed by the 49ers, secured their Olympic spot at the Mussanah Open Championship in Oman in April 2021. Like the Olympics, this event had been pushed back by a year from when it was originally supposed to take place last year.

“It was a very challenging event; it pushed us hard. It was really good preparation. Unfortunately, that’s the last competition we’ll do before the Games.

“But I think it definitely helped us. We hadn’t competed for about 14 months, so it was nice to get back to it. It felt like getting back on a bicycle,” Daniel said.

The Cape Town-based sailors say they are prepared for any prevailing weather conditions in a hot and humid Japan, conditions which they had a taste of in Oman.

“It does have the potential to suit us, weather-wise. But the odds are, in those five days of sailing, we will get a bit of everything. And we’re looking forward to that. We look forward to the challenge of any condition, and being able to deal with it in the moment and being in the right headspace is really the focus,” said Burger.

The Olympic sailing regatta takes place from 25 July to 4 August 2021, comprising race days and rest days for each class. Daniel and Burger’s campaign in the 49ers commences on 27 July. DM168

Mthethwa dismisses claims that nothing done for artists as ’propaganda’

Attacked with their own weapons, racially-abused and left fearing for their lives - police recount US Capitol riot

Newcastle mayor 'not arrested' in assault case, says he won't step down

Equites executives crack a nod for commitment to share ownership

Musina Magistrate’s Court closed as building in danger of collapsing

Powerball and Powerball Plus results for Tuesday, 27 July 2021

Lamb bobotie – Nothing tastes as good as home

Biles withdraws from Olympic final to focus on mental health

Wanted Online: Behind the screen with the vintage-loving Sthandiwe Kgoroge