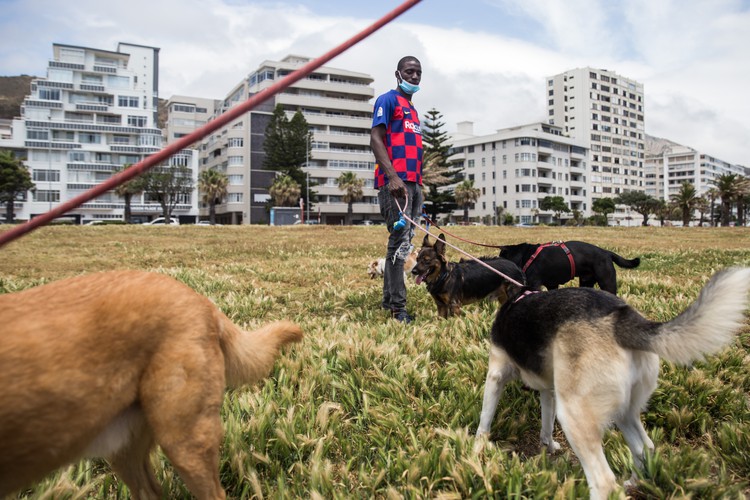 Dog walker Knowledge Nyamutowera says he walks as many as 25 dogs per day along the Sea Point promenade. Photo: Ashraf Hendricks

Knowledge Nyamutowera came to Cape Town from Zimbabwe almost three years ago. He has been walking dogs at Paw Pets in Sea Point for over a year and a half now.

“I’m just doing this for a living,” he says.

Nyamutowera works from 8am to 5pm on weekdays and two Saturdays a month from 9:30am - 2pm. Nyamutowera said that he and his older brother are supporting their parents and two sisters who live in Delft.

On any given day, he said, he walks about 25 dogs. He likes his job because he gets to interact with people from different walks of life … and dogs, he joked.

At Paw Pets, dog owners have the option to either drop their pets off for the day or staff can arrange to pick them up from their homes.

Another dog walker, Pam Buttner, has been volunteering twice a week since July. She says it has been a struggle “finding joy in life” and “staying motivated” during the pandemic. But says she found joy spending time with the furry companions. 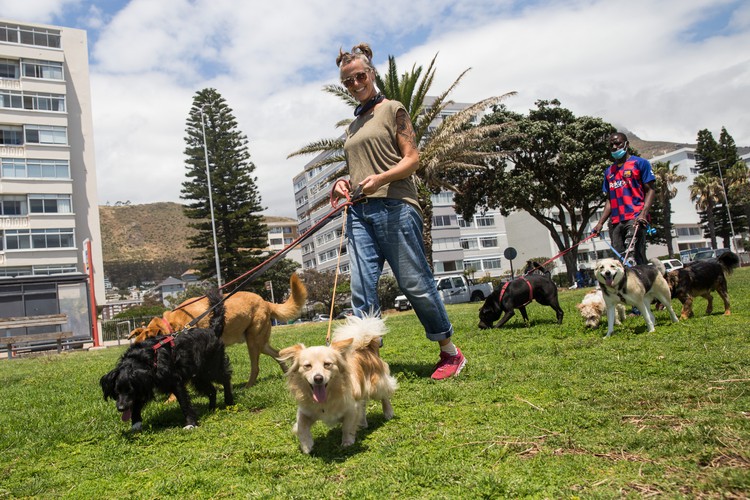 Pam Buttner has been volunteering to walk dogs twice a week since July. She says it has helped her “find joy in life” during the pandemic. Photo: Ashraf Hendricks

Buttner lives with her partner in Three Anchor Bay who works in the film industry which was also brought to a halt during the hard lockdown last year. The couple live in a flat where no pets are allowed, so she decided to volunteer her time.

Walking three dogs on a leash along the Sea Point Promenade, Buttner says, “I go play with dogs in a doggy day care twice a week to bring me joy.”

Buttner says it has helped her cope and gave some structure to her days.

She said that since the start of the lockdown, she has found that many dogs have become aggressive. “They sometimes pick up on the anxiety of the owners,” she said. To assist with this, the dog handlers often include basic obedience training in their sessions.

Both Buttner and Nyamutower can regularly be found walking, leashes in hand with a bunch of dogs on the Sea Point promenade.

Zlatan Ibrahimovic: Failure is part of success. If Zlatan can make a mistake, so can you
Goretzka pro 4:2 vs Borussia: Bayern deserved to win, although they did not enter the game well
Gundogan is the new Lampard. Pep's system made him the most productive midfielder in Europe
Barca midfielder Moriba: We never thought that the title race in La Liga was lost
Ignashevich about 1:2 with Chaika: Torpedo had enough chances for a confident victory
Holand escaped serious injury and will play against Sevilla
Inzaghi on 1:3 with Juventus: Lazio deserved much more