Garrick Higgo of South Africa poses with the trophy after winning on the 18th green during the final round of the Palmetto Championship at Congaree on June 13, 2021 in Ridgeland, South Carolina. (Photo: Mike Ehrmann/Getty Images)

South Africa’s Garrick Higgo gave further notice of his prodigious talent and bright future with a one-shot victory at the Palmetto Championship on the PGA Tour on Sunday.

Winning golf tournaments on the world’s biggest tours is hard. Tiger Woods, one of the two greatest golfers of all time, “only” wins about one in five tournaments he plays.

That’s actually a remarkable statistic in golf terms. Woods’s 82 PGA Tour wins from 368 starts leaves him joint top with Sam Snead in terms of tournament victories. But it also means that Tiger doesn’t win about 80% of the time he plays a tournament, underlining how difficult it is to get over the line.

The next most prodigious winner in golf currently, Phil Mickelson, is some way back of Tiger. Mickelson, who sensationally became the sport’s oldest major winner yet when he won last month’s Masters at the age of 50, has 45 PGA tour victories in 645 tournaments – winning once every 14 starts. It’s a fantastic record, but it again underlines the difficulty in winning.

How about this one? Garrick Higgo, in only his second start on the PGA Tour, has as many wins (one) as fellow South African Louis Oosthuizen, who has played 199 tournaments. 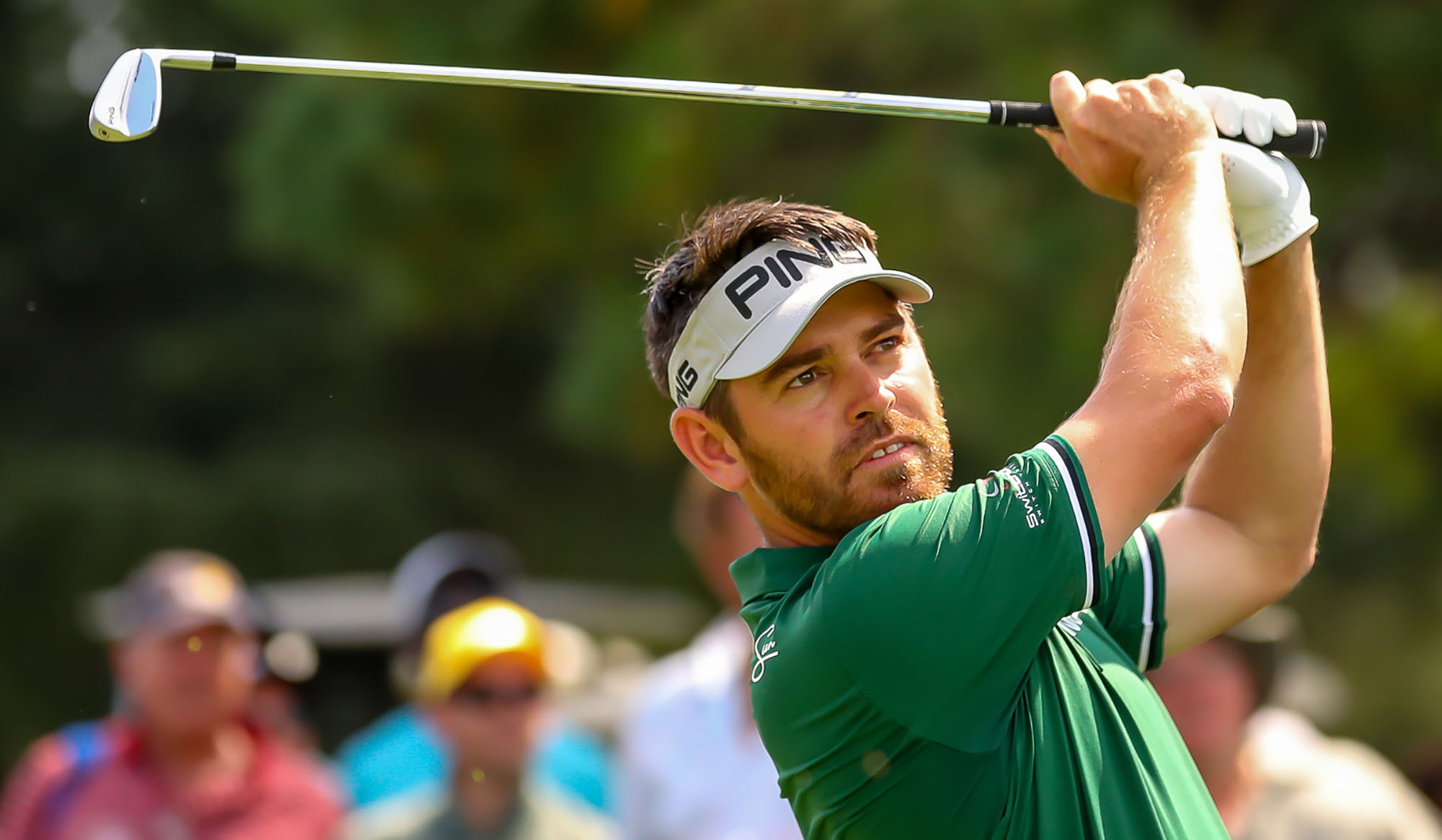 Louis Oosthuizen of South Africa during day 4 of The South African Open Championship hosted by the City of Joburg at Randpark Golf Club on January 12, 2020 in Johannesburg. (Photo: Gordon Arons/Gallo Images)

And Oosthuizen’s PGA Tour win actually came in Scotland at St Andrews where he won the 2010 Open Championship. Majors and some other events are co-sanctioned by all the world’s golf organisations, including the European Tour. Oosthuizen has never actually won a PGA Tour event on US soil.

Higgo’s breakthrough PGA Tour win at the Palmetto Championship on 13 June was a reward for consistency. He was the only player in the field to score in the 60s every round – shooting 68, 69, 68, 68 – which earned him $1.3-million (R17.3-million) and, more importantly, years of exemptions into the biggest tournaments and massive respect from his peers.

The left-handed Stellenbosch native started the final round six shots behind leader Chesson Hadley, who has been on tour for seven years and was still searching for his maiden win. For Higgo to have any chance with that deficit, he needed to post a low number and hope the players ahead of him came backwards. He fulfilled his end of the bargain and the rest of the third-round leaders fulfilled theirs by going backwards.

Hadley imploded with a final round 75, which contained six bogeys, including the last three holes. He missed the winning score by one shot. Even world No 1 Dustin Johnson couldn’t match Higgo, only managing a 70 and ruining his chances with a triple bogey seven at the par-four 16th.

Sure, Higgo needed some help to bag the win, but he showed nerves of steel under pressure, just as he did on the Canary Islands swing on the European Tour last month.

The 22-year-old played the final six holes in one-under par while everyone else in the field went the other way. It wasn’t a spectacular barrage of birdies, but steady, mistake-free golf. That’s more often how tournaments are won.

Higgo is also the youngest winner on the PGA Tour since Sungjae Im at the 2020 Honda Classic (21 years, 11 months). And his victory from six strokes behind at the start of the final round is the largest 54-hole deficit overcome by a winner since Bubba Watson made up six strokes to win the 2018 Travelers Championship.

“I’m proud of the way I hung in there. It was tough all the way from the start,” Higgo told the media after the tournament. “I definitely didn’t have my A game off the tee, but I like that sometimes. I enjoy scrambling and making a couple putts, which I did, which was awesome.

“I usually am a scoreboard watcher but for some reason today, I didn’t watch it. I was just trying to stay in it. I didn’t really want to try and push. It’s one of those courses where there are a couple of holes that you can definitely make birdie on, so I was trying to capitalise on those. 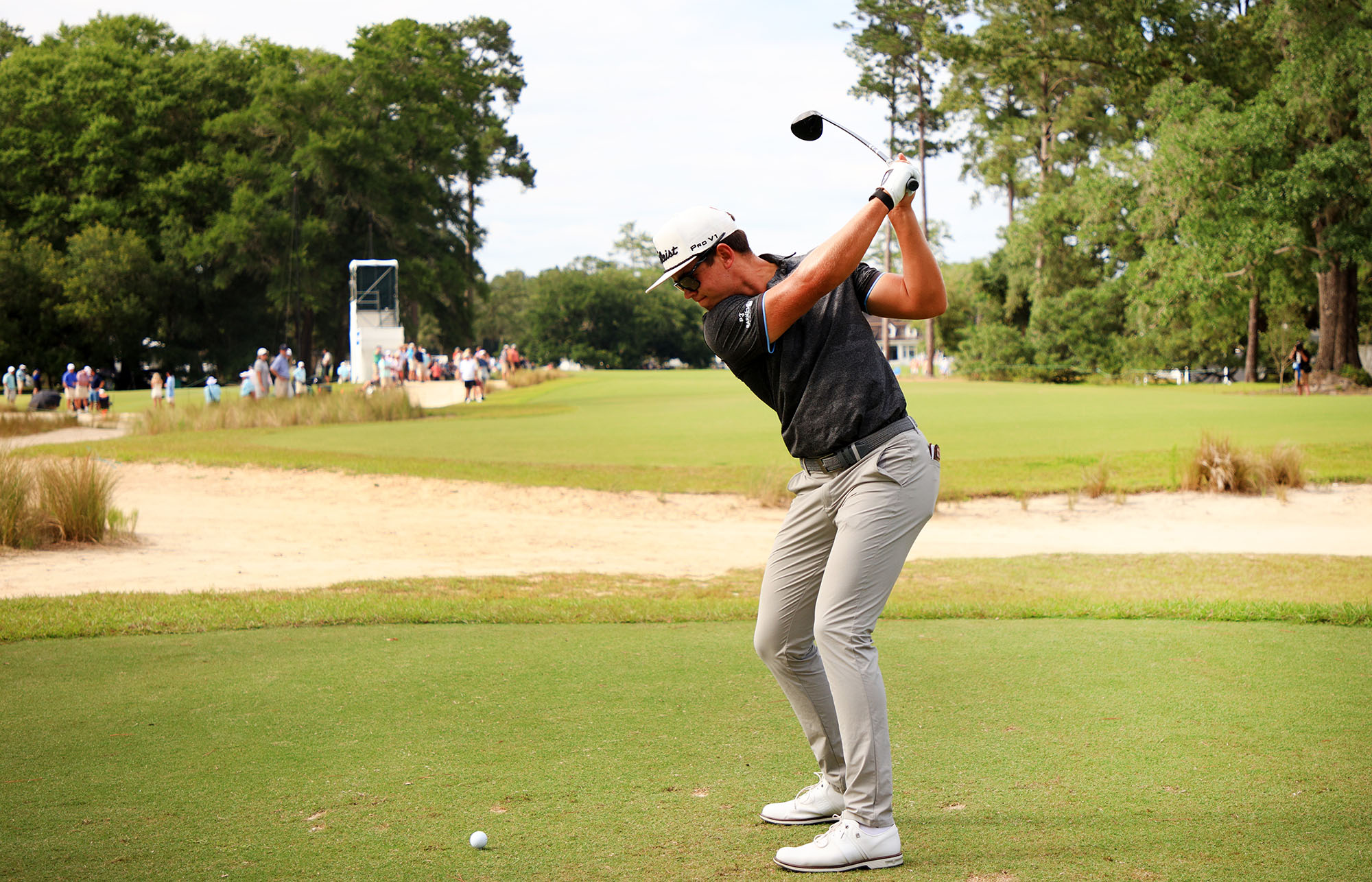 Garrick Higgo of South Africa plays his shot from the 18th tee during the final round of the Palmetto Championship at Congaree on June 13, 2021 in Ridgeland, South Carolina. (Photo:  Mike Ehrmann/Getty Images)

“When I made eagle on 12, I didn’t have to watch the scoreboard. I knew already I was kind of up there or close enough. It was just whether Chesson was going to run away with it or if we were going to stay up there and have a chance.”

South Africa’s most successful golfer to date, Gary Player, in a phone call to Higgo shortly after his one-shot victory at Congaree Golf Club, said: “I don’t think I’ve ever in my lifetime been more excited about anybody winning a golf tournament. I had tears in my eyes.

“You are beginning to believe it now. I think you’ve got that into your brain now that you believe you can be great. You are destined for greatness.”

Higgo claimed the Canary Islands Championship last month for his second European Tour win in three weeks and his third overall. Two weeks before that Higgo won at the Gran Canaria Lopesan Open with a European Tour record-low score of 255.

What made Higgo’s achievements more eye-catching was the way he dominated the field and scored. Across the 12 rounds of the Canary Islands Swing (which included the Tenerife Open), Higgo’s combined total was 68-under par as he sent records tumbling.

After 27 starts on the European Tour, three wins (which includes 2020’s Portuguese Open) constitutes an amazing return. Higgo has now added a PGA Tour win to the already bulging golfing CV. The exemptions to big tournaments that the Palmetto victory in South Carolina brings, have also opened a wide door to the world.

Higgo claimed his first professional victory on the Sunshine Tour when he won the 2019 Sun City Challenge at the Gary Player Country Club.

It’s been a meteoric rise since then for the former member of the GolfRSA National Squad. He followed that up with a second victory in the Sunshine Tour’s Tour Championship in February 2020, and in September 2020 he won his first title on the European Tour in the Open de Portugal.

It was a confidence-boosting breakthrough a week before the season’s third major, the US Open at Torrey Pines, which starts on Thursday. Not that Higgo lacks confidence.

After those Canary Islands wins he qualified for his first major at the PGA Championship at Kiawah Island where he just made the cut and then birdied seven of his first 11 holes in the final round of his debut major.

“It (winning) doesn’t change my expectations. I think I’m good with that. I’ve just gone to another level now,” Higgo said. “So, I’ll just see what my game can do. I enjoy playing and seeing what my game does and where it takes me. I’m going to continue with that. I don’t think there’s any need to put unnecessary expectations on myself.” DM

Zlatan wanted to return to PSG before extending his contract with Milan
Inter can release Lukaku for 130 million euros
Kane may submit a transfer request from Tottenham in the coming days
ğŸ—¿ ĞŸĞ¸ĞºĞµ Ğ¿Ğ¾Ğ±Ñ€Ğ¸ĞÑÑ â€ Ğ¸ Ğ·Ğ°Ğ¿ÑƒÑÑ‚Ğ¸Ğ Ğ¼Ğ°Ñ€Ğ°Ñ„Ğ¾Ğ½ Ğ½ĞµĞ²Ğ¾Ğ·Ğ¼ÑƒÑ‚Ğ¸Ğ¼Ñ‹Ñ. ÑĞµĞÑ„Ğ¸. Ğ¨Ğ°ĞºĞ¸Ñ€Ğ°, Ñ‡Ñ‚Ğ¾ Ñ‚Ğ²Ğ¾Ñ€Ğ¸Ñ‚ÑÑ!
Atalanta wants to sign Demiral or Botman before releasing Romero to Tottenham
Kane will return to training with Tottenham this week
Who owns football? A guide to the owners of all 98 clubs in the top 5 leagues

JP Smith, who does a taxi war actually benefit?

SHABIR MADHI | Covid-19 herd immunity is not going to happen, so what next?

Kaizer Chiefs feature | How much are all the players worth? Amakhosi’s total market value REVEALED

First-look: Everything you need to know about Amazon’s ‘Lord of the Rings’

News24.com | KZN activist appears in court for his ‘one bullet, one Indian’ remarks

POLL | What would you do if you won the lottery?

Safa not happy with Marawa's departure from the SABC

Katlego Maboe is back after finding Jesus

‘The romance of drinking isn’t there’: The Weeknd on his ‘sober lite’ lifestyle

Jackie Shandu appears in court over 'One Indian, one bullet' remarks

Here’s how much you’ll pay for fuel from Wednesday, August 4

Inheritance Tax Business Relief: What you need to know

‘Get the vaccine’: DJ Tira claps back after criticism for maskless event

SA in the dock over Rassie Erasmus's viral video

Steenhuisen: DA to focus on bringing Phoenix together after unrest

Libya: Empowering Libyan Women to Make a Living and Put Food On the Table

Hijacking is on the increase, Tracker says

Thato Magasa: From blue-collar to car boss in 12 years

Rwanda: What Should Be Done to Make Children Read More?

Undocumented migrants plead to be included in SA's vaccine programme

‘I like nice things’: Mohale opens up about being a ‘gold digger’

Sudan: Bodies Found in River Between Ethiopia's Tigray and Sudan