Data indicates that as many as 52% of murders comitted in South Africa (where causes could be established) relate to organised crime and inter-group violence. (Photo: Gallo Images/Roger Sedres)

The latest trends suggest a violent future for the country, which still has no national plan to tackle murder.

Despite a year of lockdown restrictions, which saw fewer offences being committed, crime and violence levels in South Africa are again rising. Most crime, but mainly that which is violent and organised, looks likely to worsen if there are no fundamental improvements in policing.

An analysis of police data shows that in March 2021 — the most recent month for which crime data is available — overall violent crime levels matched those in previous years (Figure 1). For some categories such as murder, they were higher. This is bad news given that between April and June 2020, violent crime dropped by 37% compared to the previous year.

This decrease was probably due to the severe restrictions on movement and economic activity under Covid-19 lockdowns. However, as the controls were eased, serious violent crime began to rise. This trend was predicted by the Institute for Security Studies (ISS) in June 2020 because the factors that drive crime in South Africa weren’t being addressed. 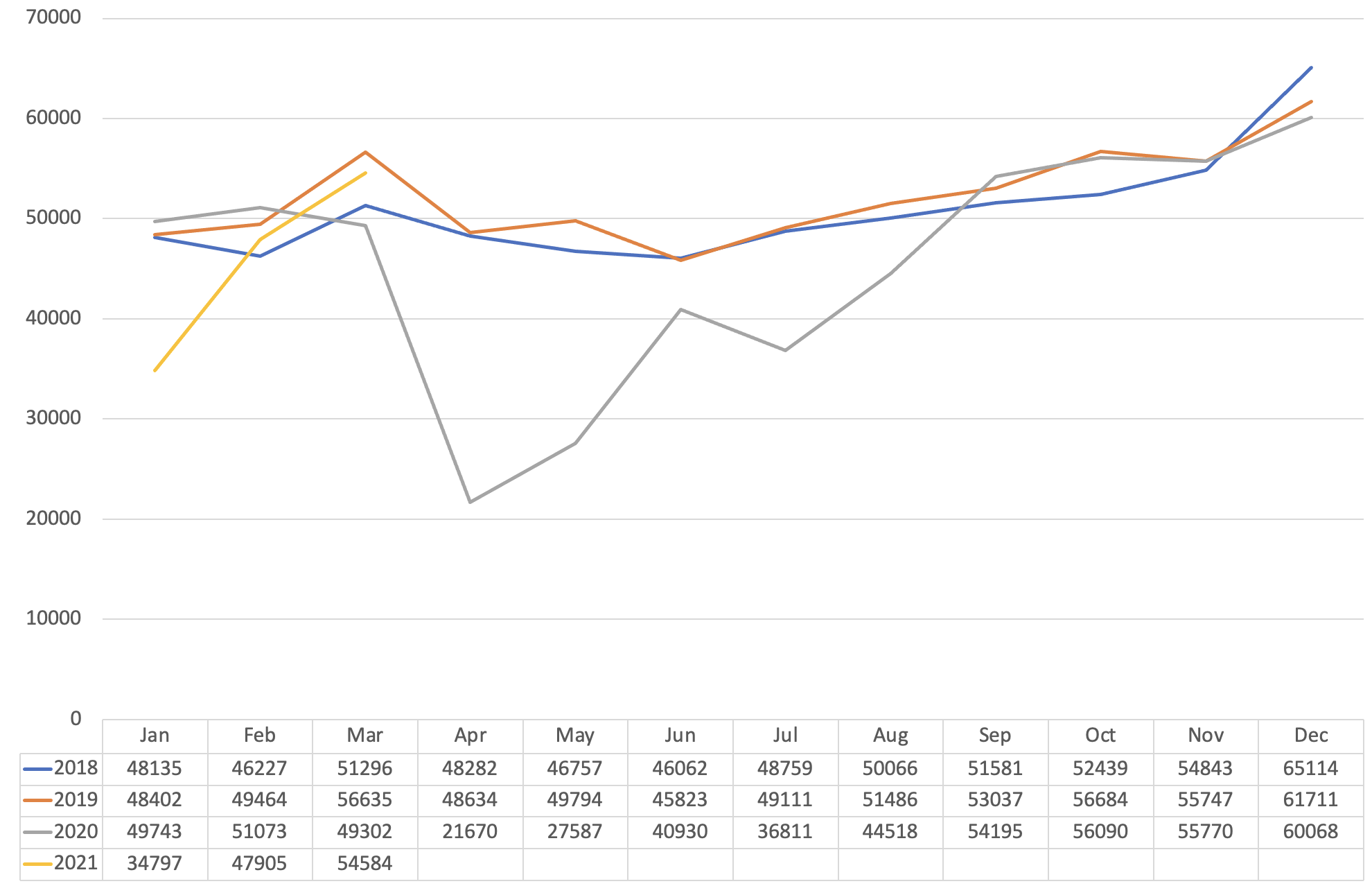 The ISS’s Crime Hub presents statistics for 29 crime types nationally, provincially, per district, per municipality and for each of the 1,154 police precincts in the country. In addition, crime figures are now available for each month starting in 2016. This is a welcome improvement as detailed data hasn’t always been made public.

Police Minister Bheki Cele announced in 2020 that the South African Police Service (SAPS) would release crime statistics quarterly. The 1 April — 30 June 2020 quarter was the first period for which monthly crime figures were made available.

If the current trajectory continues, we may well soon experience much higher violence levels. This is a daunting prospect in a country where murder and armed robbery increased by 37% and 43% respectively in the eight years leading up to March 2020. This is particularly worrying because the national murder rate has increased by over 20% since 2011/12.

These increases are probably the consequence of a combination of factors such as socio-economic deterioration, urbanisation, increased inequality, declining police performance and high levels of police corruption. A main driver of murder in many areas is the availability of illegal firearms, which is often interlinked with organised crime networks.

Given this, it is remarkable that South Africa doesn’t have a clear strategy to tackle murder. Reducing the factors contributing to murder would probably bring down violence more generally. The key is to understand what drives murder in particular areas.

Figure 2 shows the circumstances in which murders were committed in the first three months of 2021. The data is based on the 40% of murder cases in which the police had enough information to decide on possible causes. 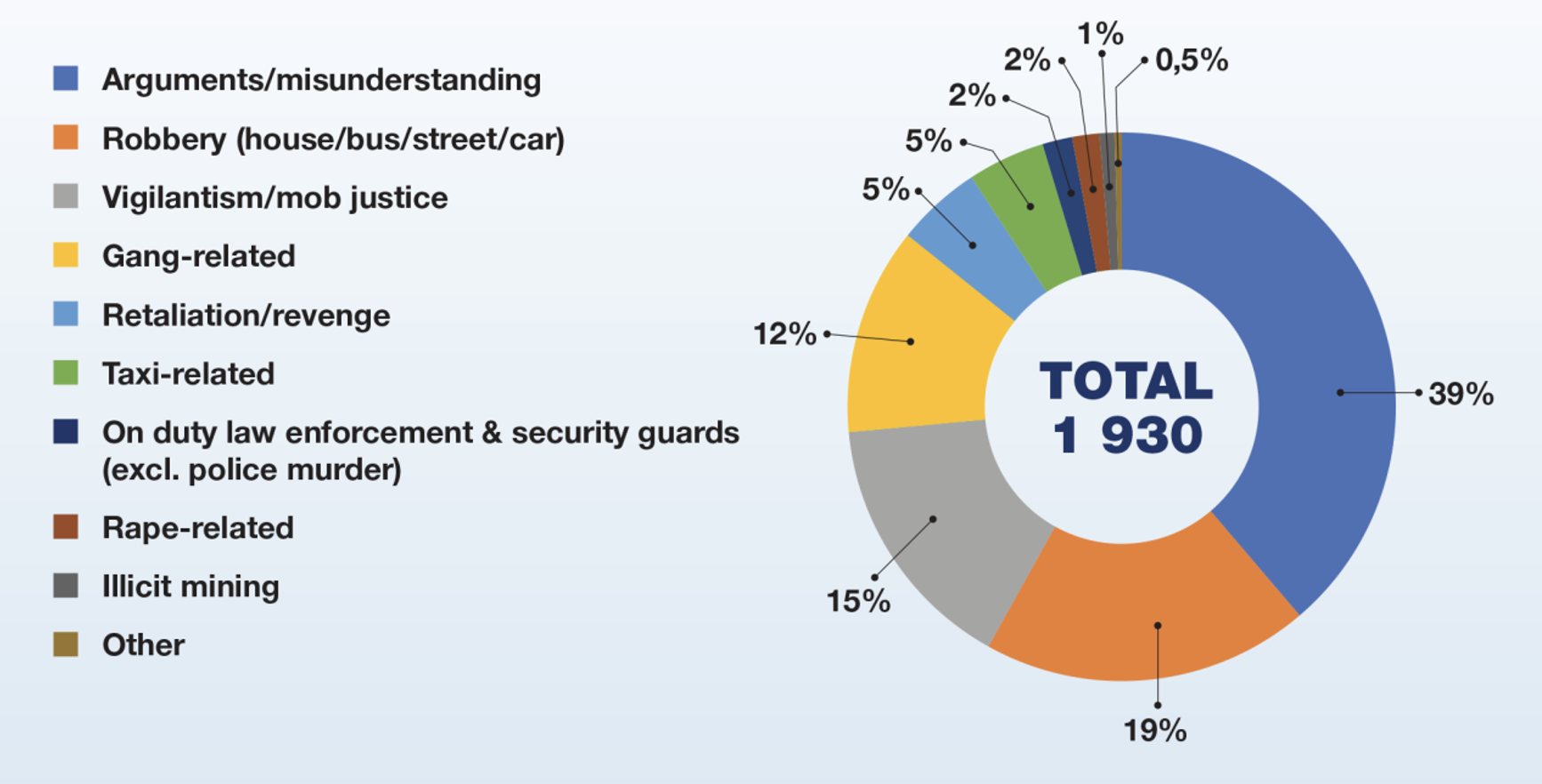 In 39% of cases (where police could establish a motive), the cause could be attributed to arguments and misunderstandings, often between acquaintances or relatives. This is a testament to how normalised violence is in everyday life. The second most common circumstance in which murders were committed was during a robbery (19%).

Given the frustration levels in high-crime communities, it is not surprising that vigilantism was the third most noted cause at 15%. Murders attributed to gangs, taxi conflict and illicit mining violence together made up 18%. If this proportion is added to robberies, as many as 52% of murders (where causes could be established) relate to organised crime and inter-group violence.

Unfortunately, the police’s ability to solve murders has declined by 38% since 2011/12, with the result that in 2019/20, detectives were only able to solve 19 out of every 100 murders. The record for aggravated robbery is worse, with only 17% being solved.

The enforcement of the lockdown regulations may have distracted police from removing illegal firearms and tackling criminal networks. It would appear that organised crime groups took advantage of this and strengthened as a result. The police’s crime intelligence capability has also declined, decimated by years of factional battles, political interference, corruption and weak police leadership. This means we can probably anticipate ongoing increases in murder and robbery in the short to medium term.

A large portion of murder and aggravated robbery occurs in predictable places and times. Figure 3 shows the 30 policing precincts that recorded the highest murders between January and March 2021. These make up only 2.6% of police stations in the country but accounted for 22.5% of all murders during this period. They are mainly located in South Africa’s larger metros. Most attacks occurred over weekends and in identifiable hotspots. 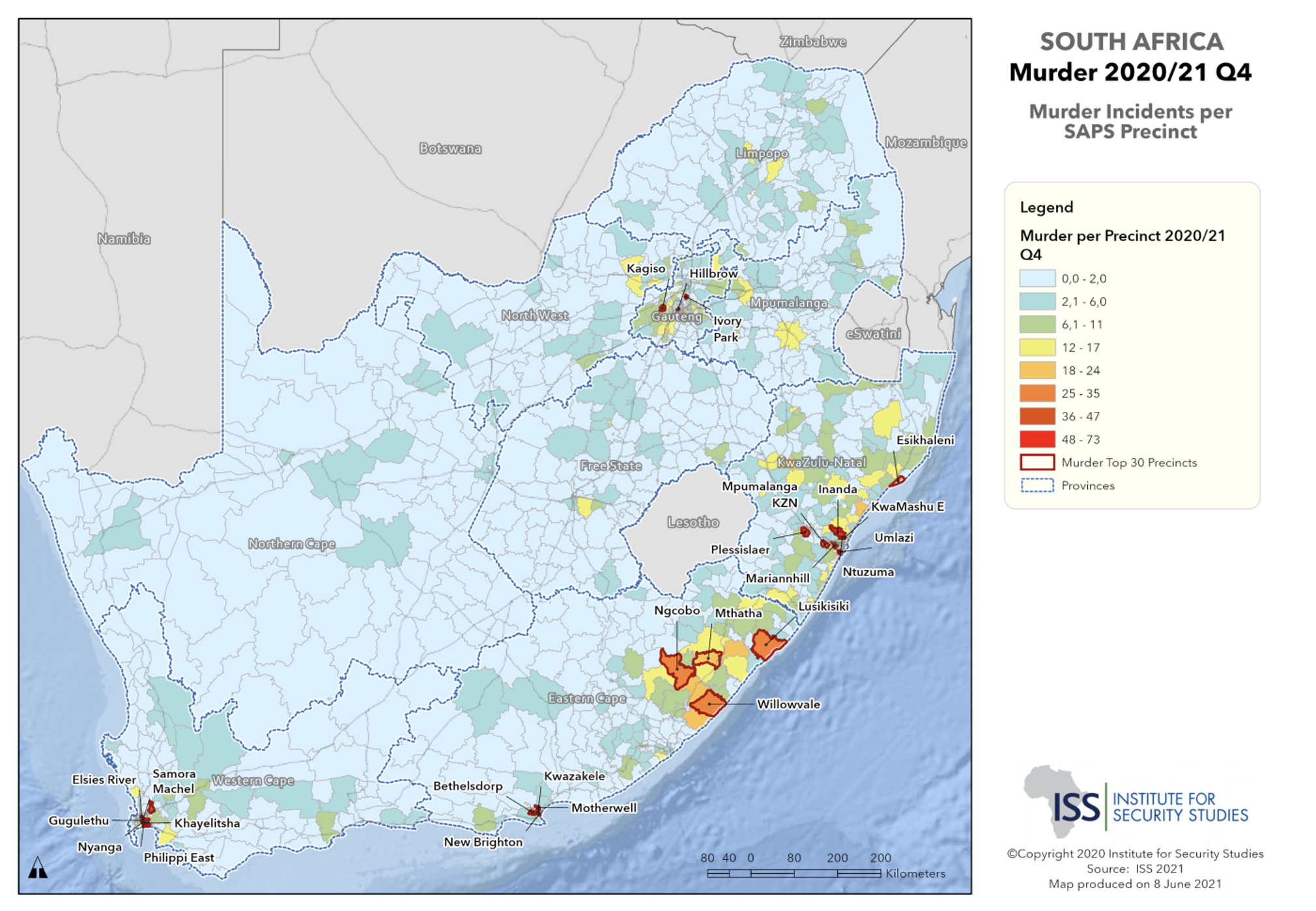 Much of South Africa’s violent crime can be reduced if police analyse their data together with information from other sources (such as ambulance pick-ups and hospitals). This will enable an understanding of what drives violence in high murder precincts. Police operations need to be concentrated on particular issues (such as removing illegal firearms and closing illegal alcohol outlets), people (such as repeat offenders), and places.

Targeted policing and a ‘whole of society’ approach advocated in the 2016 White Paper on Safety and Security could reduce violence in hotspots. For example, local government’s role involves not only enforcing traffic laws but providing services and safe public spaces so that commuters have safe and well-lit walkways. Municipalities can also provide shelters for victims of domestic violence. The meaningful involvement of community organisations is critical for local interventions to work.

A focus on tackling organised crime is vital to reducing violence in South Africa. Organised crime syndicates work across local and often national boundaries. The SAPS urgently needs a national plan to deal with organised crime at the local, provincial and country level. Dedicated investigators operating across police jurisdictions are essential.

The success of the Family Violence, Child Protection and Sexual Offences investigation teams show that dedicated units are effective in dealing with specific crimes. Speaking at a recent ISS seminar, SAPS Divisional Commissioner responsible for visible policing and operations, Lieutenant General Michael Mohlala, suggested that specialised anti-gang and murder and robbery units may be on the cards. This cannot come soon enough for weary South Africans. DM

All eyes on commodities amid debate over supercycle

Bulls too good for the Lions; power on in Currie Cup

G20 ministers at odds over coal and global warming targets

ECONOMIC WEEK AHEAD: Moderating producer inflation and a bumper trade surplus in store

DM168 RACIAL FAULTLINES: The provocateurs of a savage race-based civil war are doomed to repeat the history of 1949 KwaZulu-Natal

DM168 SCIENCE: Bone of contention: Skeleton reveals a dramatic episode in the life of a prehistoric Japanese man

DM168 SPORT: The curious case of the defectors: Athletes who seek asylum during the Olympics

Lifting bar on power self-generation a poser for infrastructure scheme

Ramaphosa to address nation at 20:30 tonight

In Pics: South Africa at the Olympics

EFF is a governing party in waiting, says Floyd Shivambu

Tunisia: Time for Unity, Not Disunity and Quarrels (Ghannouchi)

DM168 SPORT: Cricket SA’s hearings on racism not that black and white, but they do offer hope of transformation

We want to help: Register your food-related business for free on IOL’s #EatLocal platform

Bok coach Nienaber after defeat to the British & Irish Lions: 'We have to salvage this'

THE AFTERMATH: OP-ED: An urgent call to build unity in KZN and to halt incitement, racism and hate

Businessinsider.co.za | This tech company helps you make between R100 and R10,000 a month, all you need is your phone

Nigeria: Monkeypox in Nigeria - Why the Disease Needs Intense Management

Ghana: Young Muslim Women in Ghana Feel Stereotyped and Judged - Why It Matters

EFF to ‘share power’ with ANC, and Malema ‘will be president’ – reports

Zimbabwe: Govt Has No Duty to Citizens Right to Shelter - Supreme Court

Zimbabwe: Concern As Theft of 'Wankie Bricks' From Graves Rises in Hwange