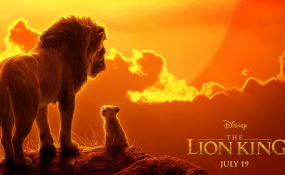 It was the 32nd Disney animated feature film, and the fifth animated film produced during a period known as the Disney Renaissance.

25 years later, the film's photorealistic remake has premiered- a one-hour- and fifty-eight-minute plot.

Here are 10 facts you may have not known about the classical film:

1. In November 1991, some of the film's animators travelled to Hell's Gate National Park in Kenya for research and inspiration for the film.

2. The famous 'Hakuna Matata' only became part of the script after the researcher's trip to Kenya.

3. A huge part of the film was finished in the artistes' homes when Disney Studios were forced to close temporarily after an earthquake in 1994.

4. Jim Fowler, a wildlife expert, brought real animals to the studio to help the film's animators study their movements.

5. It is the highest-grossing hand-drawn animated feature of all time with over $986 million box office in total.

7. It went through a number of different titles like King of the Kalahari, King of Beats and King of the Jungle before finally being named The Lion King.

9. The original final fight scene had Simba lose to Scar, and Scar eventually dying in a fire.

10. A hyena researcher sued Disney for 'defamation of character' for the portrayal of the hyenas in the film.

Cristiano Ronaldo: I needed to score from a free kick to regain my confidence
After football, Buffon will return to school. He once faced prison for a false diploma
Ronaldo scored the first goal for Juventus from a free kick. There were 43 attempts
Ronaldo is the first in 59 years to score 25 goals for Juventus in Serie A in a single season
Sulscher on 5:2 with Bournemouth: I am happy with the energy of Manchester United and the goals scored. It was a match for the fans
Rashford on 5-2 with Bournemouth: it's Important to push on until the end of the season. Exciting time
⛔ This is the first League of Armenia was stopped because of dogovornjakah. Banned 5 clubs and 58 people (45-for life)
Source https://allafrica.com/stories/201907200114.html

Pretoria home for the aged hit by 3 Covid-19 deaths, infections

News24.com | Afrikaans singer shot and killed on farm in the Western Cape

South Africa: Environment, Forestry and Fisheries On Applications Open for the Driving Force for Change Funding

Kenya: Kenya to Reopen Its Airspace Despite Increasing COVID-19 Cases

This is another level of brutality, Cele tells Bulelani Qolani

Palesa Matabane directs 'After God's Own Heart' at the vNAF

Leeds take another step towards Premier League, Brentford in hunt

Rival demos in France over killing of bear

We have lost a unique talent - President Ramaphosa on Mary Twala

Day 100 of lockdown: What Western Cape stats look like

Mary Twala remembered as 'prolific actress,' 'gift to the arts'

Government is planning to tax the super wealthy

SA reacts to opening of restaurants as virus cases rise

TikTok distances itself from Beijing in response to India app ban

Lockdown in pictures-Day 100: The cycle of life

What happens to domestic workers if they get infected at work? unions ask

Carole Baskin raked in R339k during first day on Cameo

Challenges remain as Metrorail slowly gets back on track

'Beautiful' to have a pint - England's pubs, restaurants and hairdressers reopen

Shock as cops arrested over cigarette corruption are named

How to spot an investment scam

News24.com | LIVE | 'You will rest in eternity together' - daughter bids farewell to parents who died of Covid-19

News24.com | 'You will rest in eternity together' - daughter bids farewell to parents who died of Covid-19

Coronavirus 'storm is going to get worse' in Gauteng