Rodwell Khomazana and his mother, Shamiso Mabika, who says she hopes to see her boy smile again. (Photo: Supplied)

Rodwell Khomazana, the young Zimbabwean boy who was mauled by a hyena in May, is heading to South Africa for reconstructive surgery.

While fundraisers work around the clock to collect money for Rodwell Khomazana’s hospital care, the nine-year-old boy mauled by a hyena at an all-night church gathering in Zimbabwe is set to arrive in South Africa on 19 June.

Khomaza’s head will be wrapped in bandages and he will wear a visor on the SA Airlink flight from Harare to Johannesburg. He will be accompanied by Johannesburg trauma nurse Maqshuda Kajee, medical evacuation expert Dr Sayuren Moonsamy and his mother, Shamiso Mabika.

Khomazana hasn’t had a proper meal since 7 May, when a hyena attacked him, mauling his face while he was sleeping at the Zviratidzo Zvevapostori Apostolic Church. Since then the youngster has been fed through a tube up his nose.

“After surgery, we will have to teach him how to eat again,” says Kajee.

Mabika says her third-born son’s favourite food is sadza, which is Shona for porridge.

This week, while waiting to leave for South Africa, the boy kept up with his English and maths homework in the hospital, sobbing because he misses going to school. He is a Grade 3 pupil at Manyiri Primary School in Zaka, 340km south of Harare. Khomazana is also a keen footballer, his favourite team being Manchester United.

After the accident, Khomazana was rushed to Harare’s Parirenyatwa Hospital – the largest hospital in Zimbabwe – where surgeons stabilised his open wounds.

In the first few days patients heard the boy scream in anguish and thrash in his bed as memories of the attack tormented him, with nursing staff having to restrain his arms and sedate him. 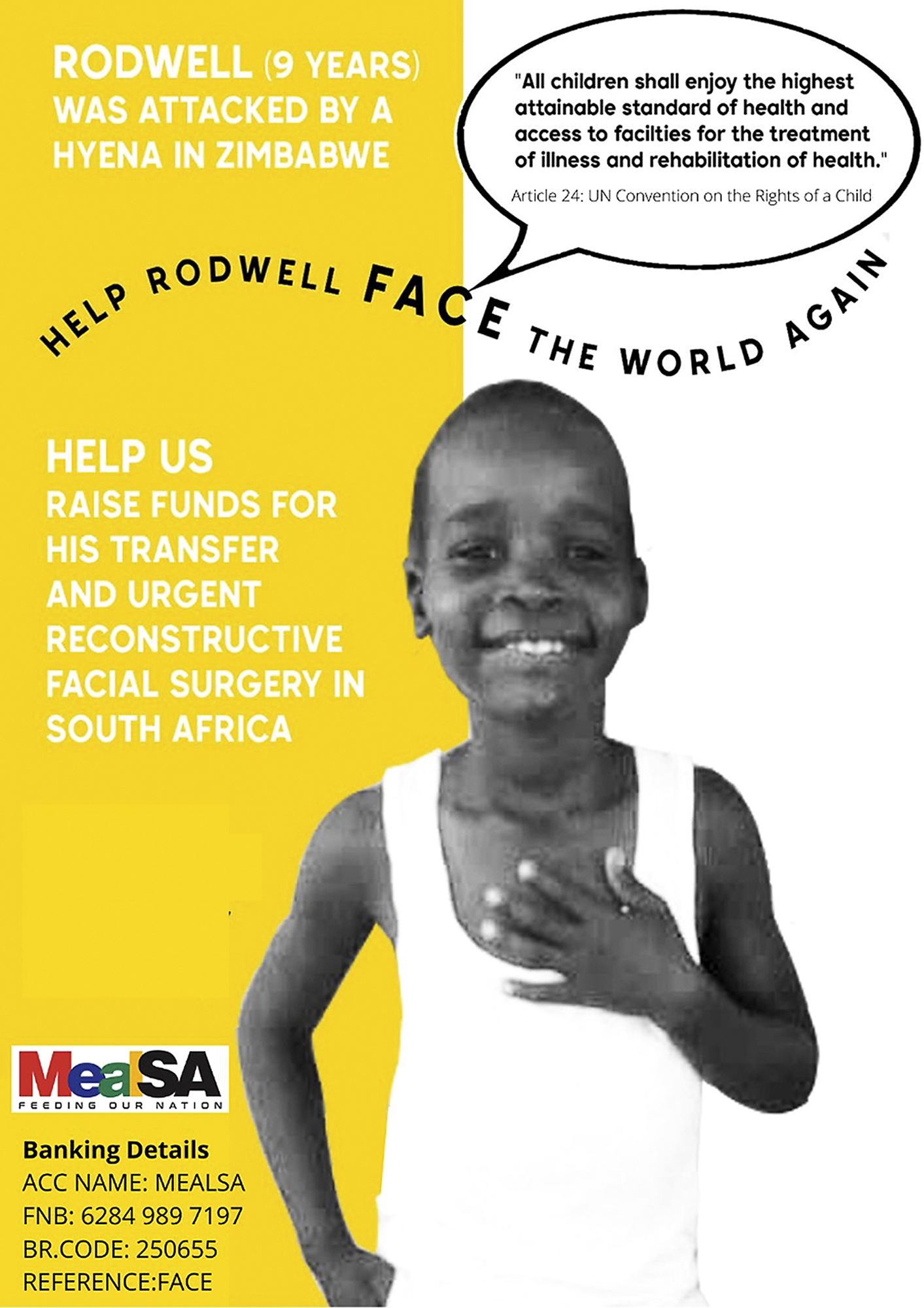 A fundraising drive hopes to raise enough money to pay for Rodwell to have facial reconstructive surgery and aftercare.

Speaking to DM168 on 16 June, maxillofacial and microvascular surgeon Dr Wayne Manana of Parirenyatwa Hospital recalls performing life-saving surgery on the boy. Manana was in Johannesburg to meet with medical suppliers when he received word of Khomazana on 8 May. He got an earlier flight back to Harare on 9 May to operate on the boy.

“I flew back to Harare especially for Rodwell on the Sunday and immediately … went into theatre,” says Manana. “So a big thank you to the team who prepared him, so he could go into theatre timeously. It is remarkable that he survived; the deformity, his physical appearance was very severe.”

“The child had very devastating injuries to his face, a great loss of a lot of the soft tissue,” says Manana. “All of the major features of the face were gone, with a few fractures. Initially we took him to theatre to do a very thorough cleaning. We agreed that the priority was to stabilise him, basically to clear the airway to make sure he [could] breathe. My biggest worry was the risk of infection because the wound was open, plus we do not have much information about germs in a hyena’s mouth.”

He says Khomazana was haunted by flashbacks of the incident and had to be sedated: “The first few days we had to sedate him, you can imagine, we had to pin his arms down… He had [flashbacks] of the attack that caused his injuries. People in the ward said he kept on screaming.”

Manana adds that fortunately nursing veteran Sister Chaku Nyamupaguma volunteered to take care of Khomazana’s wounds. “Sister Chaku came through to dress those big wounds. The other nurses were a bit nervous. They did not know how to go about it. Sister Chaku is not even part of the hospital, but volunteered, and she has looked after him since. So there have been many people looking after him.”

Now that Khomazana is better and can speak a bit, he has come to refer to Chaku as “Gogo Chaku”.

“He is such a cheerful young man. So brave,” says Manana. “He is very motivated and optimistic that things will be okay. Of course, the people around him have been reassuring him that everything will be fine.”

In South Africa, Kajee has been at the heart of the fundraising drive named “Help Rodwell face the world again”.

Even though top South African surgeons have pledged their services to reconstruct Khomazana’s face, a total of R1-million is required for his hospital fees and ongoing care. 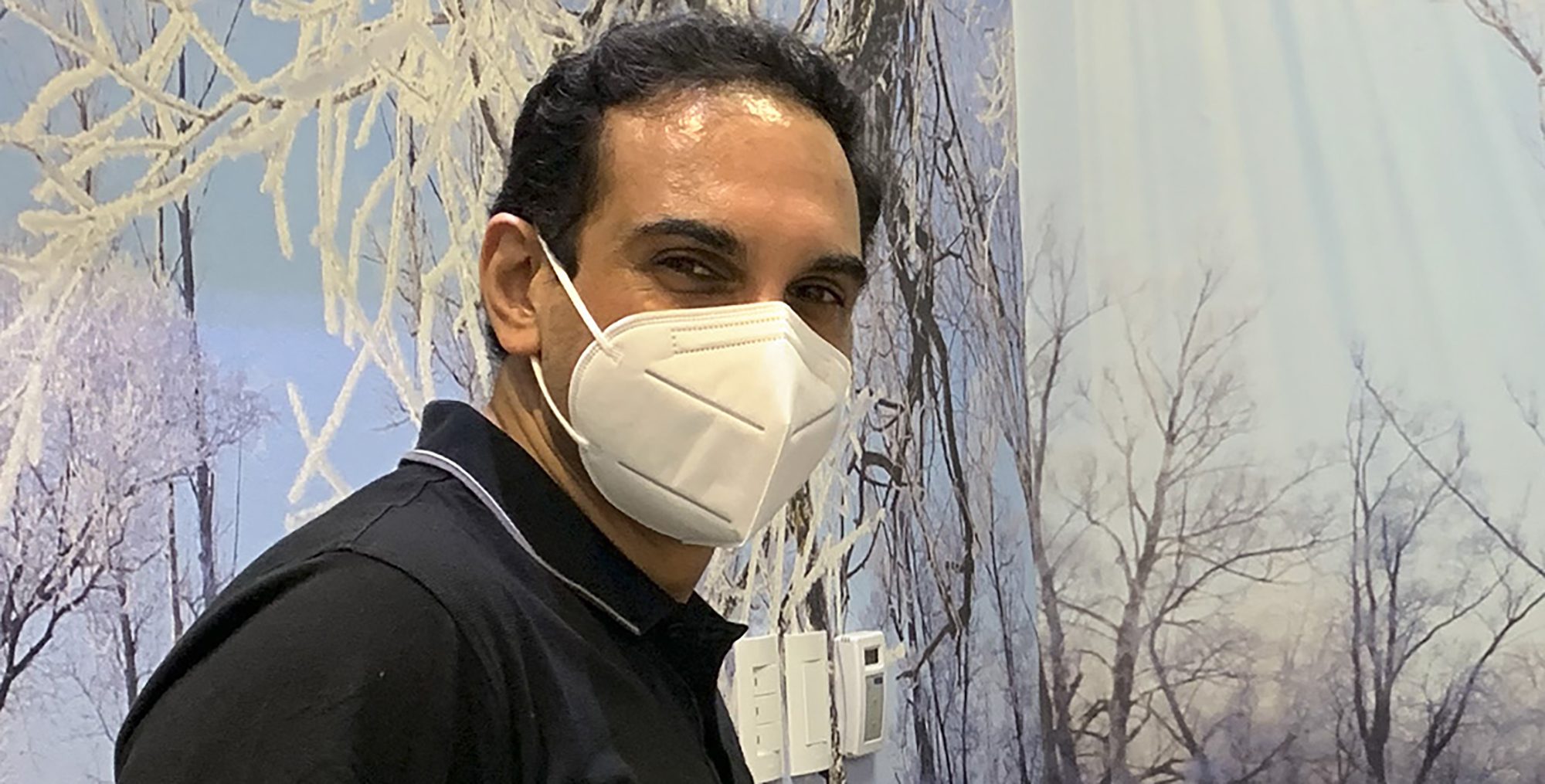 Between phone calls to arrange logistics for flights and funds, Kajee explains: “Even though the surgeons will operate for [nothing], we need funding for the theatre – for which there is a rate per minute, and we cannot estimate exactly how long he will be in there. Also, he will need to be in the ICU [intensive care unit]. He will need a lot of medication and aftercare to check that his wounds are not getting septic. He will need physio, occupational therapy, speech therapy, psychological help…”

After touching down on 19 June, Khomazana will be taken from OR Tambo International Airport to Mediclinic Sandton, where renowned plastic surgeon Dr Ridwan Mia is set to head a team performing an assessment procedure on 21 June.

“The first surgery will be an assessment to determine the extent of the injuries,” says Kajee. “Based on what they find, they will confirm a date for the proper reconstruction of his face.”

Manana, who has been invited to observe the surgery in Johannesburg, said the procedure would be a challenge: “We do see cases like this, accidents with wildlife,” he says. “But this one stands out as one of the most challenging. The reconstruction will be a challenge, reconstructing something similar to what was there. An upper lip is dynamic, it can move. Recreating this movement is very challenging, a reconstructive nightmare for any surgeon. See, movement comes from muscles, and those muscles are gone.”

Speaking to DM168 over Zoom last week, Mia said he was ready: “You know, it’s daunting. It’s a big surgery, but I’m looking forward to it. We have so much support and that makes a big difference.” He estimated that Khomazana’s surgery might take a total of 20 hours, adding that in all likelihood they would graft cartilage from the boy’s ribcage to rebuild his nose, covering it with skin from his forehead or thigh.

Mia made headlines in 2011 for his skin grafts on toddler Pippie Kruger, who suffered third-degree burns on 80% of her body when fire-starter gel exploded at the family’s home in Limpopo. Two years later, then-president Jacob Zuma bestowed on him the national Order of the Baobab for this work.

Kajee points out that questions have been raised about treating Khomazana at a private hospital. “But the government hospitals are overloaded,” she says. “Charlotte Maxeke Hospital is closed; it’s Covid and numbers are spiking. Where must we go? How do we ignore this child in the midst of all of this?”

Kajee says donations received will be strictly monitored. “We have chosen an NGO called Meal SA as a partner. [It has] a proven track record and stringent controls to ensure the funds will be well spent and controlled.”

She adds that she first heard of Khomazana’s plight through nursing colleagues. “I’m acting on two sentiments. As a nurse, I took it upon myself as a duty. And secondly, as a mother, it’s an act of love and compassion,” she says. DM168

Yes, we can afford a Universal Basic Income Guarantee

Taxi fraternity urged to get vaccinated

To empower the poor, we need to end BEE (and other bad ideas)

Two medals in the bag for SA at Tokyo Olympics

Companies could legally fire you for not vaccinating

Refusing the Covid jab is a betrayal of the common good

Is this delayed election saving the ANC?

‘This is how I’m going to die’: Police testify on US Capitol riot

OP-ED: As the Refugee Convention turns 70, the plight of millions of Africans highlights the challenges ahead

REQUIEM FOR SOUTH AFRICA: ‘Phoenix massacre’: What really happened in the deadly collision of brutalised communities

News24.com | R242K in the bag for two Daily Lotto players

PUBLIC TRANSPORT: Peace accord on the table as Western Cape police report that taxi conflict has subsided for second day