Shoprite has been working with more than 300 community projects in an endeavour to mitigate hunger through food gardens and to provide early childhood development services to poor communities. Maverick Citizen interviewed five of the women leading these community projects and will run their stories over the next week.

If you happen to be driving past the Ivory Park taxi rank next to the Kopanong shopping centre on a Wednesday, you are likely to spot the elderly of Supa Dimama holding a market day, selling the products from their vegetable garden to their community.

Josephine Mpofu is the founder of the Supa Dimama Senior Citizens Centre based in the densely populated township of Ivory Park, Midrand.

Mpofu says she had a difficult upbringing. Her mother remarried when she was a teenager and she moved with her mother and stepfather to their new marital home, where she says she felt neglected and like “an orphan”. She then moved in with her grandmother, who she says was everything to her.

This made her appreciate grandparents and the importance of looking after them. Mpofu says the elderly need to be venerated for the sacrifices they make for their children as well as being vestiges of memory and history for younger generations.

Mpofu left school in Grade 9 because there was not enough money for her to finish her education. She got married when she was 17 and was widowed at 25 when her husband died after a short illness, leaving her to look after their two children alone. 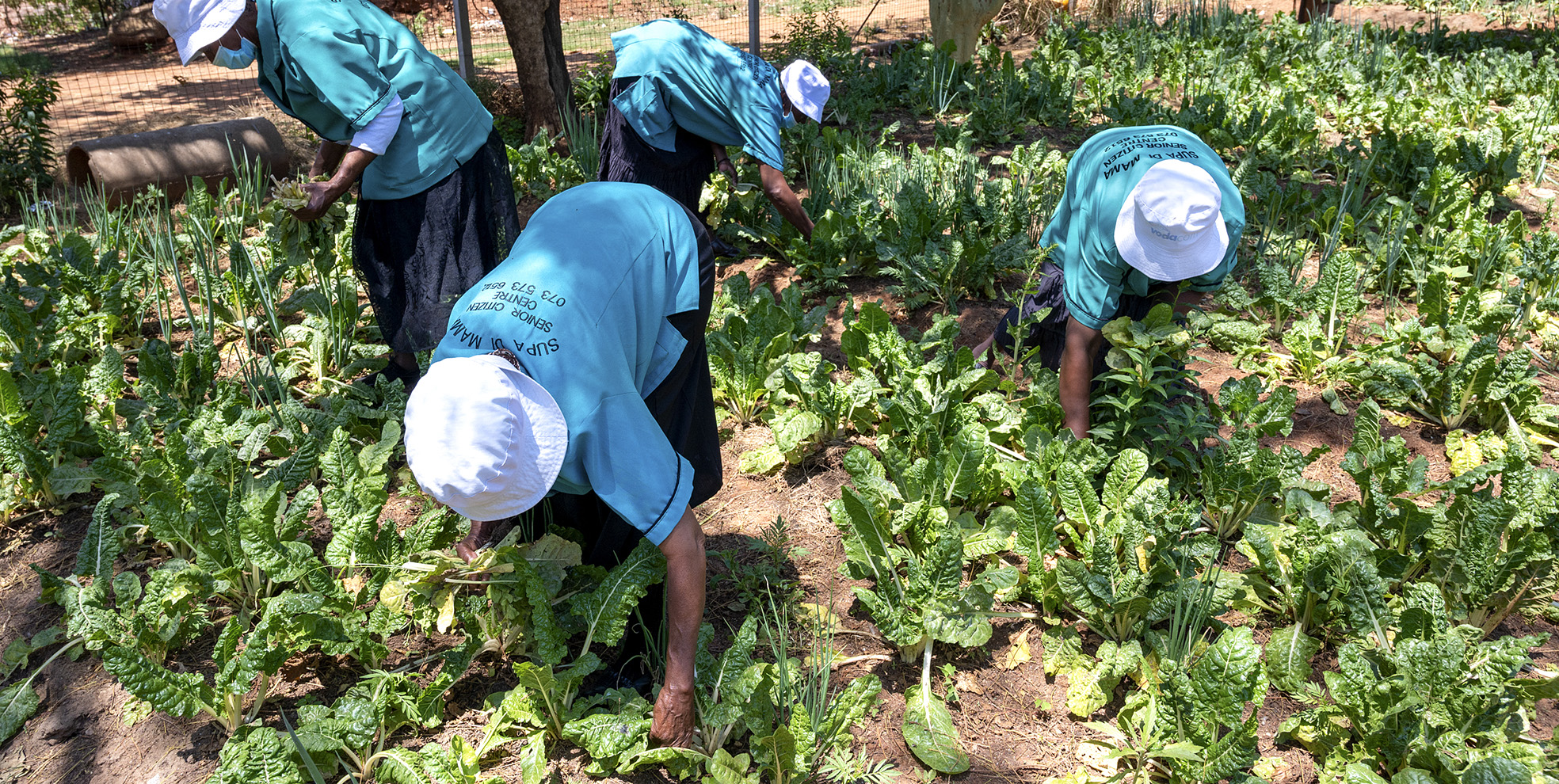 She later met an elderly woman who had come all the way from KwaZulu-Natal in search of her son. She took the woman in and managed to contact a family member who took her back to KZN, where she died two weeks later.

It was at this point that she realised her calling was to take care of elderly people and she started by taking care of 100 grannies at her church, giving them “love and care”.

Mpofu says there is a lot of unemployment in Ivory Park and often the children and grandchildren of the elderly take their pension money, leaving them without money to even buy “tea and bread to eat”.

Mpofu started the Supa Dimama Senior Citizens Centre in 2009, in what was then dilapidated municipal property inhabited by nyaope addicts and hawkers.

She initially managed to raise just R5,000 to renovate the buildings after attempts to secure funding from the Department of Social Development were unsuccessful. 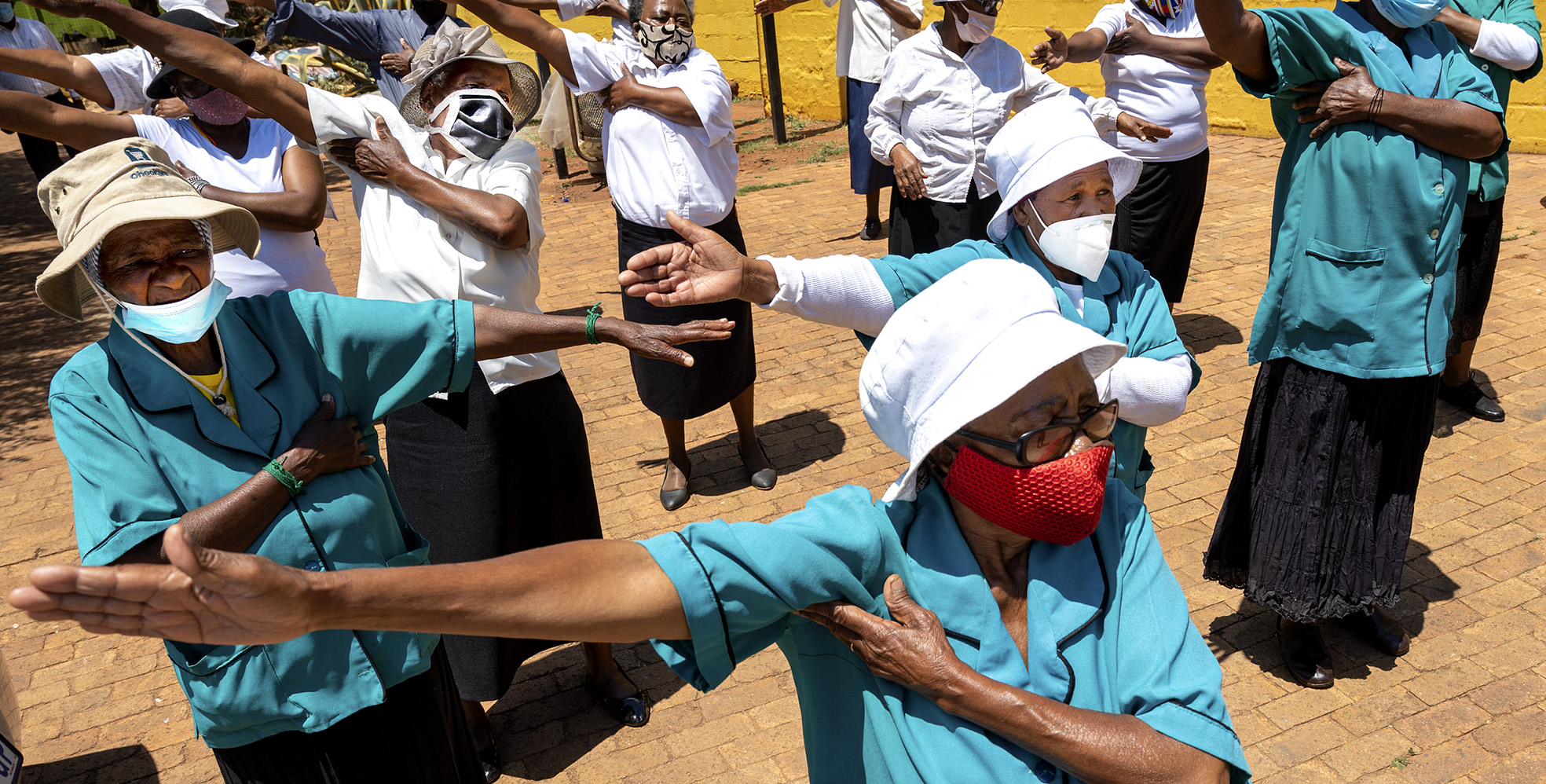 She remembered how her grandmother would plant vegetables for the family to have food and decided to do the same so she could feed the senior citizens at the centre.

In 2017 she partnered with Shoprite through an initiative called Food and Trees for Africa, where she and her volunteer staff were taken through a series of workshops teaching them how to plant and harvest in a sustainable way.

They also learnt how to make their own compost, maintain the safety of their plants with natural pesticides, and how to market their produce. They now grow enough food for the senior citizens at the centre as well as to sell to the hawkers in the community.

At Supa Dimama the community’s senior citizens receive breakfast and lunch, and take part in daily activities including exercising, knitting classes, gardening, sewing, singing and dancing. They receive their medication at the centre.

Mpofu says she is determined to reach full sustainability and is trying to get funding for a chicken coop, which will provide them with fresh eggs and meat for consumption and sale. She also wants to grow flowers to sell.

“Working with the elderly is a blessing and a calling,” says Mpofu. DM/MC

Steve McManaman: Real Madrid are an aging team. They need new players if they want to reach their previous heights
ISCO could move to Sevilla in January. Lopetegui is personally Interested
Bilyaletdinov about the Champions League: Loco can leave the group. Unmotivated Bayern can be beaten in the 6th round
Zlatan Ibrahimovic: I Thought about retiring, but I wanted to change the mentality of Milan
Vasco da Gama sports Director: Balotelli will be like Maradona for us
Real Madrid won't buy Mbappe in the summer of 2021 due to the crisis (Le Parisien)
Ibra scores in 39, Buffon drags in 42, Ronaldo has no plans to finish. Is football really getting old?
Source https://www.dailymaverick.co.za/article/2020-10-27-supa-dimama-senior-citizens-centre-love-and-care-for-the-elderly/

Lungisa: Supporters must tell Ramaphosa to intervene in Zuma 'attacks'

World shares up on vaccine and US stimulus hopes

'Not all officers are like this, but your silence will affect you': Mashaba on drunk cop video

AIDS victories show what we can do if we try

PODCAST: Finally, an SOE chairman standing up to political bullying

Solidarity Fund to continue to end of 2021

How Andile Lungisa got his get-out-of-jail card

Kambole has sadly wasted his opportunity to impress at Chiefs

EFF calls on Ramaphosa to remove Gordhan from Cabinet

Cloud over pastor Shepherd Bushiri's extradition, as he appears in Lilongwe court

Phaahla: Covid-19 has not had a severe impact on people living with HIV/Aids

SA ports tariffs are set to stay unchanged for 2021/22

News24.com | DearSA not backing down from court bid to have lockdown extension set aside

Oil ticks up as Opec+ postpones meeting about supply from 2021

Somizi ‘finds’ Tito Mboweni – are cooking lessons in the works?

Trending on Twitter: From Tito's chicken to Matric farewells

Arcadia is the latest source of British billionaire rivalry

Hopewell Chin'ono: Ginimbi could've been saved if Zim 'had an ambulance service that worked'

News24.com | OPINION | The parallels of fighting the Aids epidemic and Covid-19 pandemic

Players will skip Australian Open if blocked from training in quarantine: Vallverdu

Rwanda: Electoral Body to Go Ahead With Grassroots Polls Despite Covid-19

Maverick Citizen: Tuesday editorial: In the Covid-19 panic, let’s not forget that HIV/Aids is still very much with us