Maverick Citizen West Coast: ‘I don’t want to bury my child.’ A mother shares her anguish over son allegedly hit by police bullet

Family struggles to deal with the trauma of young Leo Williams’ shooting while their West Coast community protests over housing needs.

“I want my child back, even if he is a vegetable. I don’t want to bury him,” said a shattered Lucille Williams, 40, mother of nine-year-old Leo Williams who was shot during violent protests in Laingville, St Helena Bay last week.

Leo, a Grade 2 learner at EJ Malgarte Primary School in St Helena Bay on the Cape West Coast, was shot in the head on Friday 31 July 2020 after police allegedly pumped eight rubber bullets into a corrugated iron structure. The community says police fired the bullet, which is lodged in Leo’s brain, but police are denying they fired the shots that seriously wounded the boy. 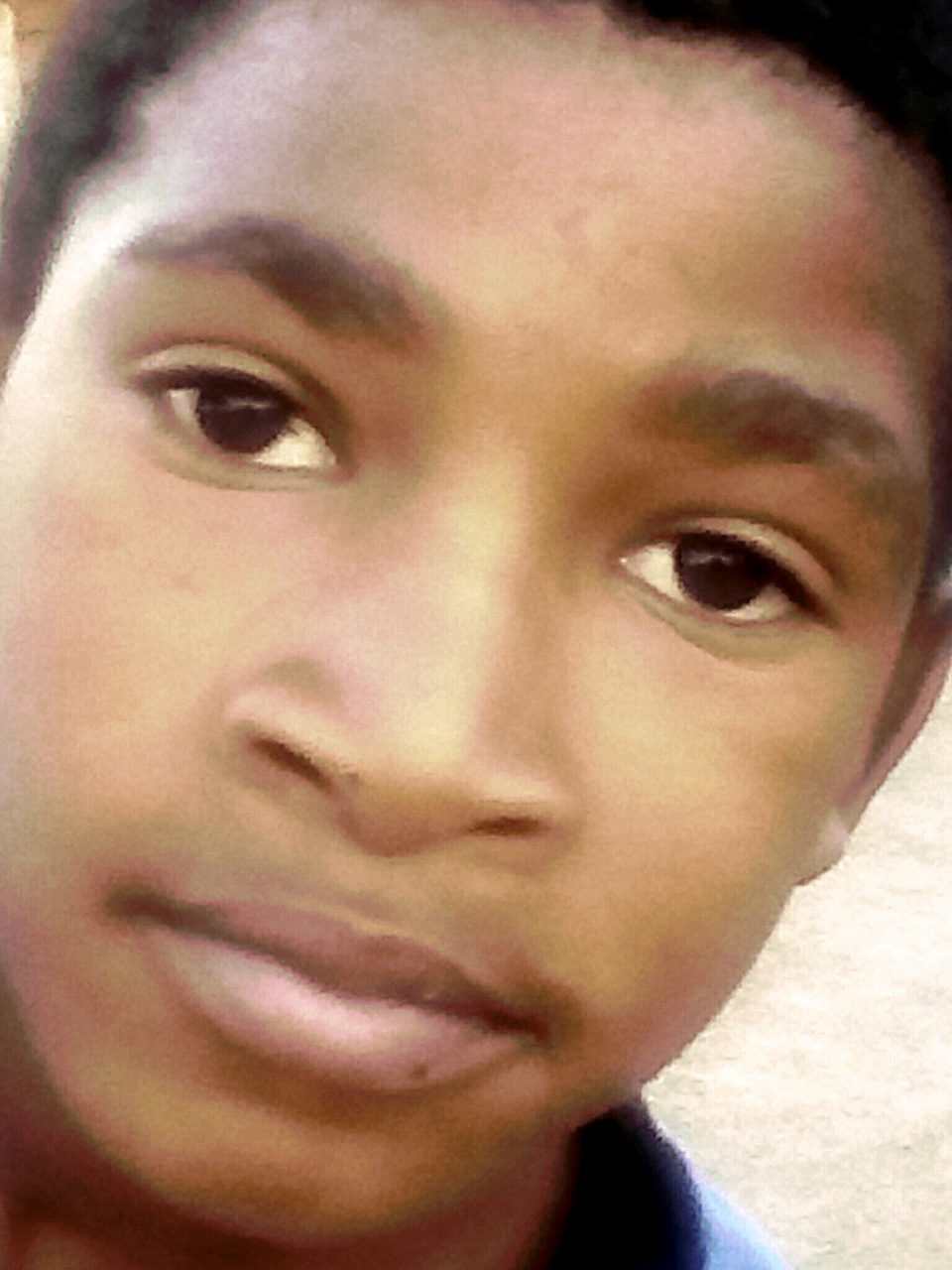 Leo is in a critical condition at the Red Cross Children’s Hospital in Cape Town. Doctors warn that removing the bullet may cost his life.

In an interview with Maverick Citizen in Laingville on Tuesday, 4 August 2020, his mother shared the pain and despair she felt when visiting her son in hospital on Sunday, seeing him with tubes connected to his head and lungs. 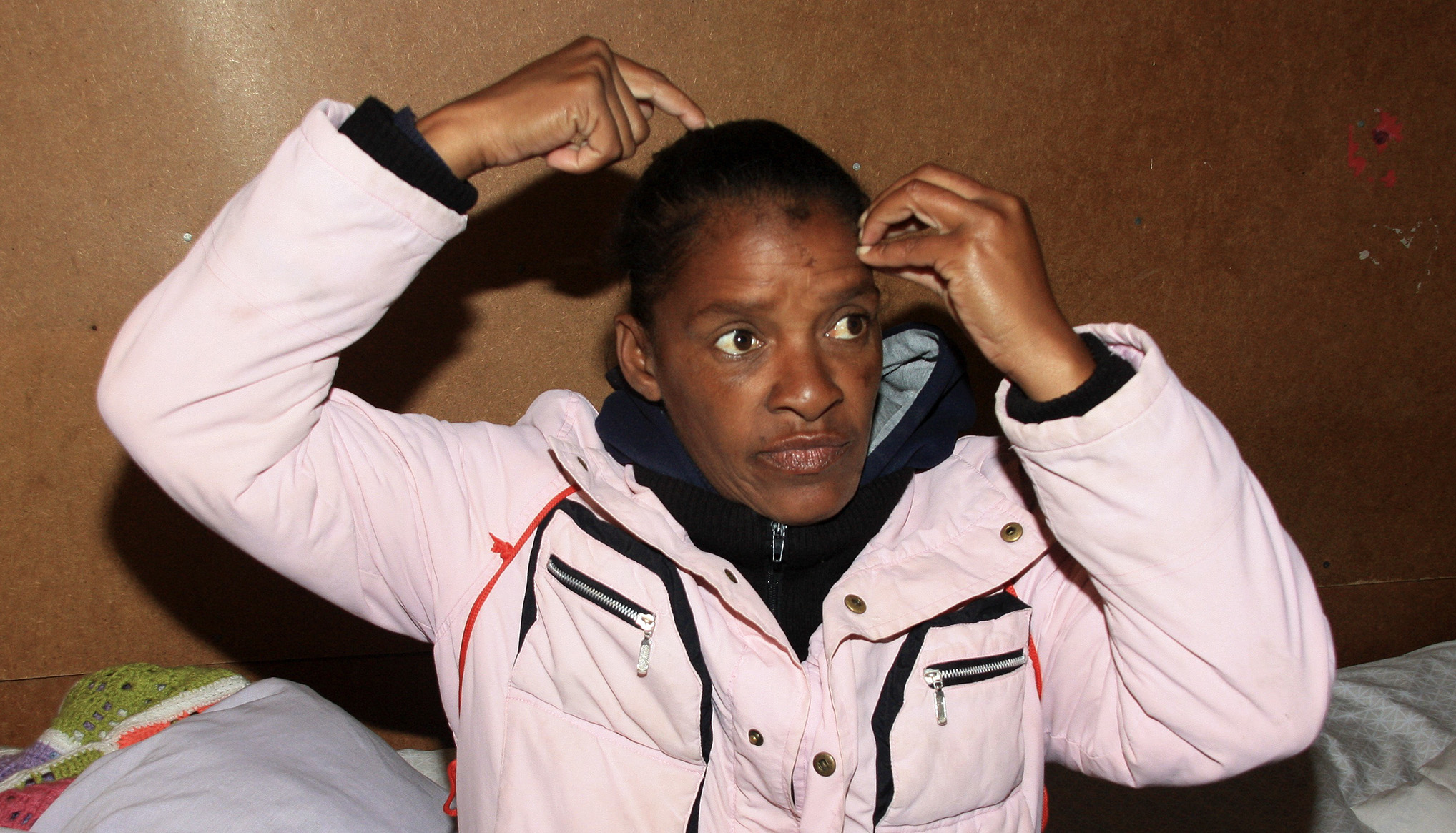 “When I looked at Leo I thought my child was going to die. But I felt it wasn’t his time because he is still so small. I asked myself, why can’t the pain he endured be handed to me. I keep on asking myself, ‘Why him?’

“No parent should experience such pain. I know my child’s brain has been damaged and I know there is a chance that he might be a vegetable. It doesn’t matter if he comes home as a vegetable or paralysed, but I don’t want to bury him,” Williams said.

Her eyes were a reservoir of tears as she recounted the events that had unfolded on Friday, and her state of mind when she heard that her son had been shot. She had not been present when it happened. Two of her friends walking down the road shouted that a person had been shot “at aunty Cathy Thomas’s house”. The woman known as Aunty Cathy is the legal guardian of Leo. On hearing this news, Williams collapsed, but told herself there had possibly been a mistake and the victim was not her child.

Regarding the allegations that the police had shot Leo, his mother said:

“It is not their job just to shoot because at the end of the day my child wasn’t playing in the street. My child was in a safe environment surrounded by people and this shouldn’t have happened.”

She was overwhelmed by the support shown by people in and around Laingville who came out in great numbers to protest in honour of her young son. If the police allegedly responsible for the injuries to her son would come out and say they were sorry, it would have been “fine” for the community to halt their protest, Williams said. 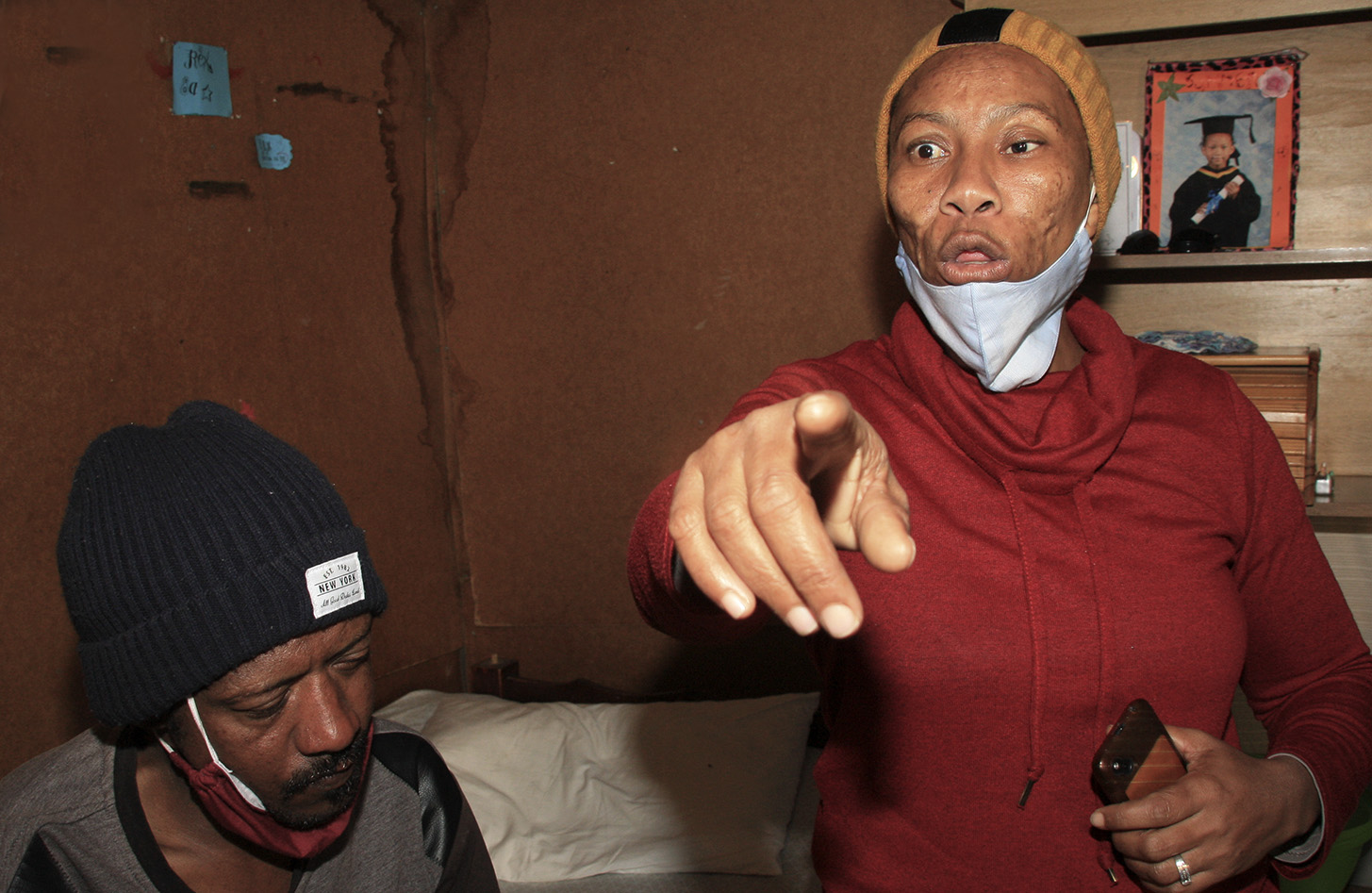 Leo’s uncle, Angus Thomas, and his wife, Luzelle Uithaler, who had been with Leo and six other people inside the corrugated structure when the incident took place, sobbed and trembled as they recounted the events.

They had all been watching television and enjoying quality time when the tranquillity was shattered by a hail of bullets which “sounded like an explosion”, as the couple put it.

Leo was lying in the bedroom watching TV and the other children were playing in front of the adults in a half-empty lounge-kitchen area furnished with only a bed, stove and fridge, Uithaler said. 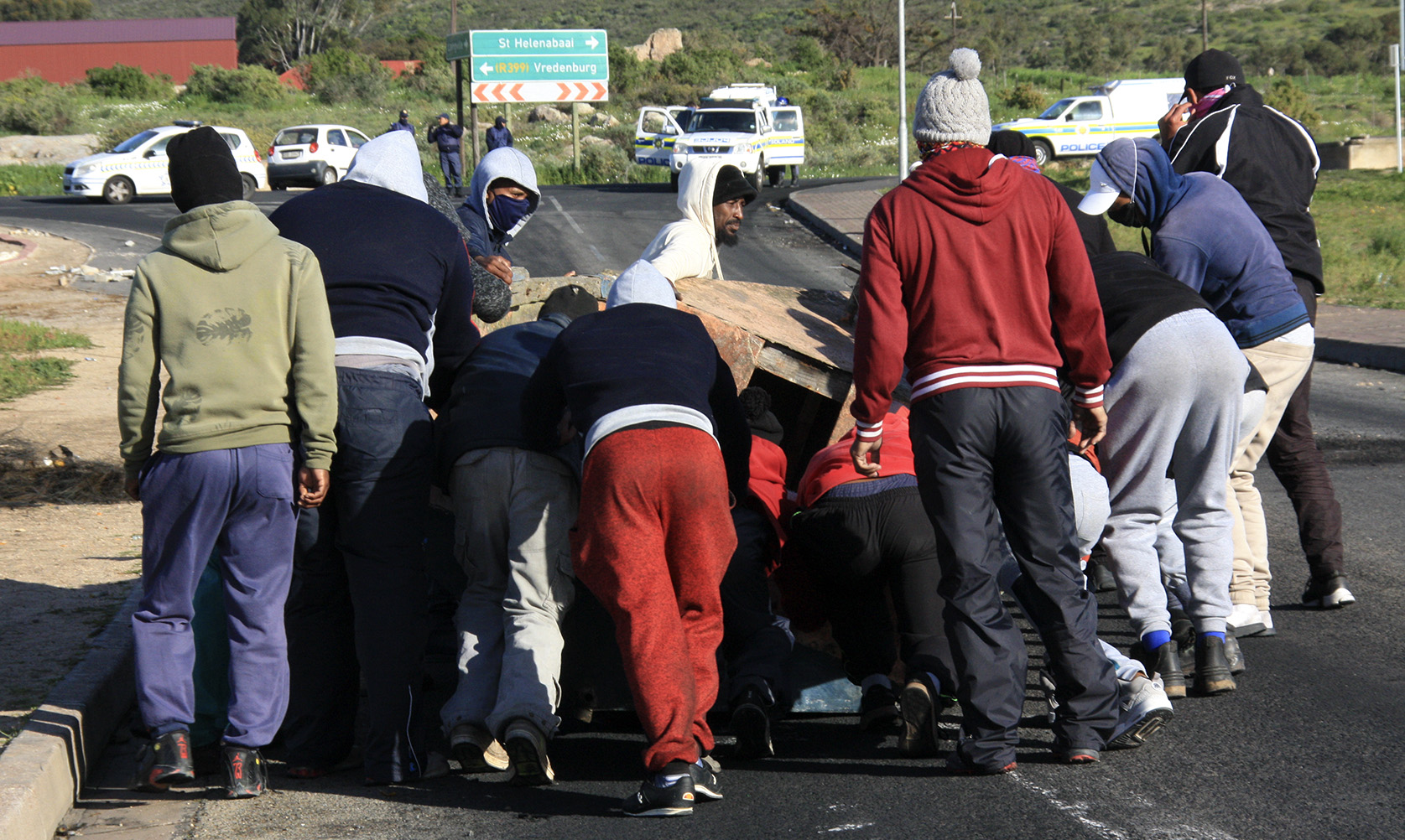 The sounds of rubber bullets and stun grenades fired by the police at protesters that night made it virtually impossible to hear the television. The children were peeping through the window when she told them to move away, Uithaler said.

“The sound of the bullets became louder and I told everyone to fall down to the floor. This is an empty ‘hok’ (shack) and the echo inside sounded like a bomb explosion. We all ran into the bedroom and while lying on the floor my husband asked where Leo was. One of the children lying on the floor looked up and shouted that Leo was lying on the floor,” she said.

At that moment everyone became hysterical and started crying, while the shots continued to rip through the corrugated structure, she remembered. 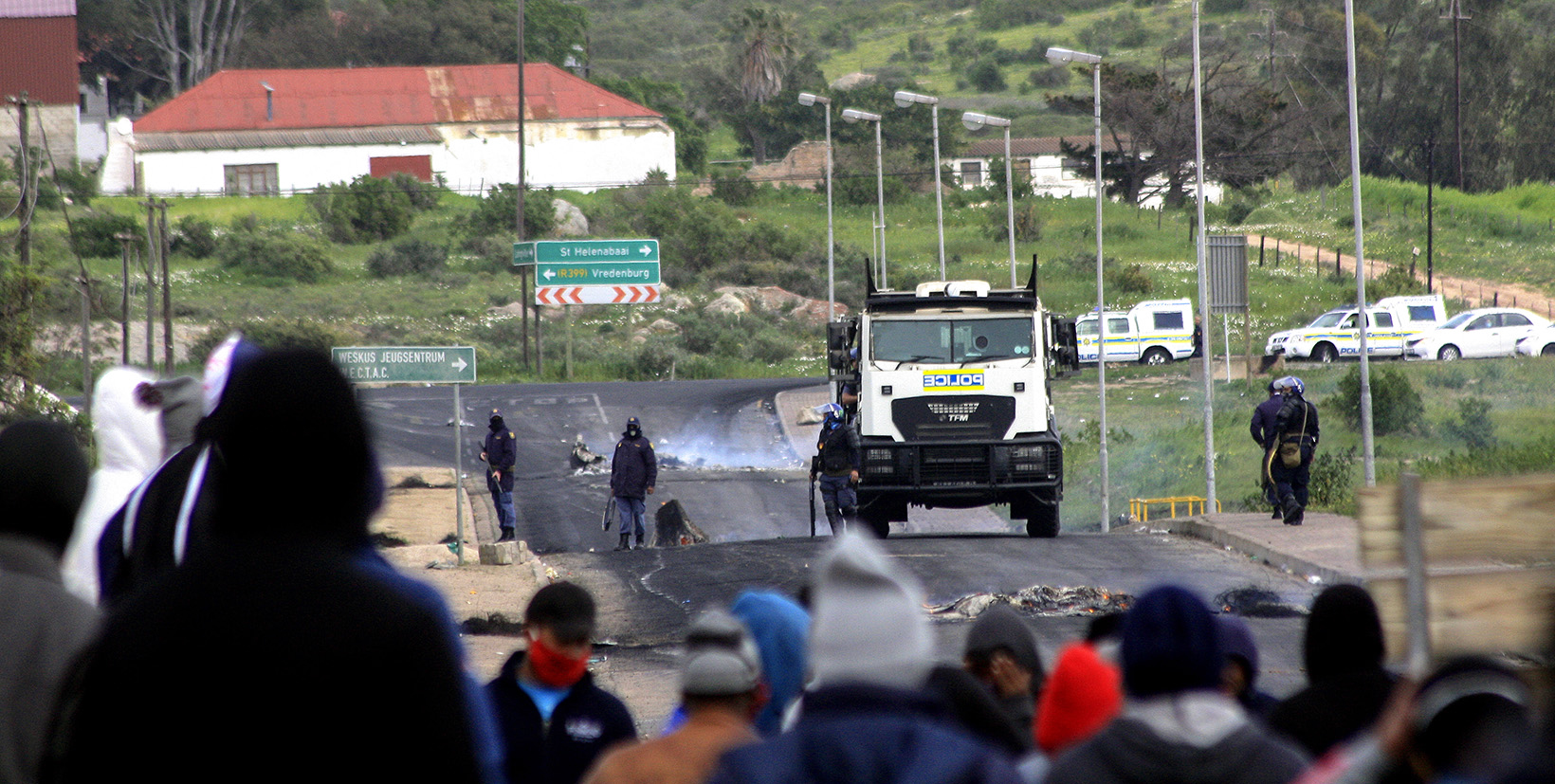 The police presence in Laingville during the protests. (Photo: David Rossouw)

While the interview with our reporter was taking place on Tuesday, police fired stun grenades and rubber bullets at the protesting crowd in Laingville. Hearing that sound sent both Uithaler and Williams fleeing into the bedroom. Minutes later they came out again, crying, explaining that they had not slept since the incident.

“Hearing the sound of the bullets and stun grenades brings back the memory of the shooting incident.”

Protesters barricaded roads with burning tyres and small boats as well as stands from the sports field. Earlier, Western Cape Human Rights Commissioner Chris Nissen had not been able to enter the area because of the volatility of the situation, but eventually, protesters allowed our reporter to bring him safely into the area.

His first stop was the place where Leo had been shot. He told Williams that he would arrange for the Women’s Legal Resource Centre to contact her, explaining that there were two cases to be made: a criminal matter, to be investigated by the Independent Police Investigative Directorate, and a civil matter.

“I cannot tell you what to do and not to do. But just be careful what you say because there are drones above you that record everything. When investigations are carried out they will use the recorded information against you.”

Nissen explained to the crowd that he was not from the government or a political party, but from the South African Human Rights Commission (SAHRC) and did not report to the government.

He emphasised that the community couldn’t continue to fruitlessly talk to the Saldanha Municipality. They needed “something tangible on paper” that the SAHRC could use to keep them on their toes.

Nissen informed the crowd that his presence in Laingville was not to make any promises, but to ensure that they were not stripped of their rights, among them access to water, housing and electricity.

“What the people here want is a place to call home. You can’t be 35 years and live in the backyard of your parents,” he said.

Nissen emphasised the importance of a meeting between Saldanha’s mayor and municipal manager, as well as the police, to find an amicable solution to end the five-day-long protest.

He asked the community to elect a delegation to accompany him to the meetings. While he was talking to the crowd, a police Casspir tried to barge through the burning barricades. Nissen, hands raised, then walked to the Public Order Policing (POP) unit members. Heated words were exchanged and eventually, they retreated. The sound of gunfire was heard till late afternoon while POP members and protesters clashed.

Human rights monitors will be deployed to Laingville to gather information and statements from residents about what led to the protest action and the skirmishes with police. On Thursday 6 August, Saldanha Bay mayor Marius Koen will give a report-back to Laingville residents on the way forward in addressing the housing need.

Police spokesperson Noloyiso Rwexana said four men, aged between 15 and 50, had been arrested for public violence. They were released on notice to appear in court on Friday 15 August 2020. DM/MC

Karl-Heinz Rummenigge: Xabi Alonso is an Interesting coach for Bayern. He's a great guy
Van de Beek's agent: Donny is happy at Manchester United. Svart spoke as a mentor and adviser, this is his personal opinion
The test passes a medical examination in Barcelona. He will almost certainly sign a contract. Koeman on defender
Steinhaus will be the first female referee at a German super Cup match. This is her last game
Suarez and Fati - among the candidates for the best player of September award in La Liga
Van de Beek's adviser: Donny is a substitute player at Manchester United. I don't like it at all
Koeman about Griezmann: I'm very happy. Now he has more freedom and is doing a great job
Source https://www.dailymaverick.co.za/article/2020-08-04-i-dont-want-to-bury-my-child-a-mother-shares-her-anguish-over-son-allegedly-hit-by-police-bullet/

MAGA Influencer KingFace Passes Away At 38, Was Reportedly In A Coma For Months

Northern Cape mayor and councillors must be investigated: public protector

US wants $4.2m that Edward Snowden made from his memoir

UK, US and French tourists will not be allowed into SA

Nadal breezes into third round as injury stymies Serena

Kolisi and Am to lead in Springbok Showdown

ANALYSIS: How social security could make life better in SA after COVID-19

Last Year They Created A Black Film Festival For San Antonio, This Year SABIFF Will Be Available To The World

News24.com | CT City salutes Pitso Mosimane on 'great rivalries over the years' ahead of Egypt move

Pitso has proved himself in the PSL, he can do it in Egypt – Ntombela

BREAKING | UK, US and French tourists will not be allowed into SA

Governments and business must come together to fight climate change

‘No new law needed for expropriation’ – BLSA and FMF

Pitso Mosimane and Mamelodi Sundowns – a match made in heaven

News24.com | Stiff sentence for woman who claimed to be David Mabuza's niece, made false allegations

Suspects rounded up over FS asbestos project due in court Friday

Global diversification is vital to lighten up local doom and gloom

Mom relives how her boyfriend almost raped her blind child (12)

Spanish Boy will be no pushover for talented young filly challenger

News24.com | Housing agency head admits to slipping up over quality of units during Covid-19 lockdown

Bagnaia to join Miller at works Ducati, Zarco to Pramac

Traditional leaders threaten to go to court over suspension of circumcisions

LETTER: Why ignore the Eskom solution?