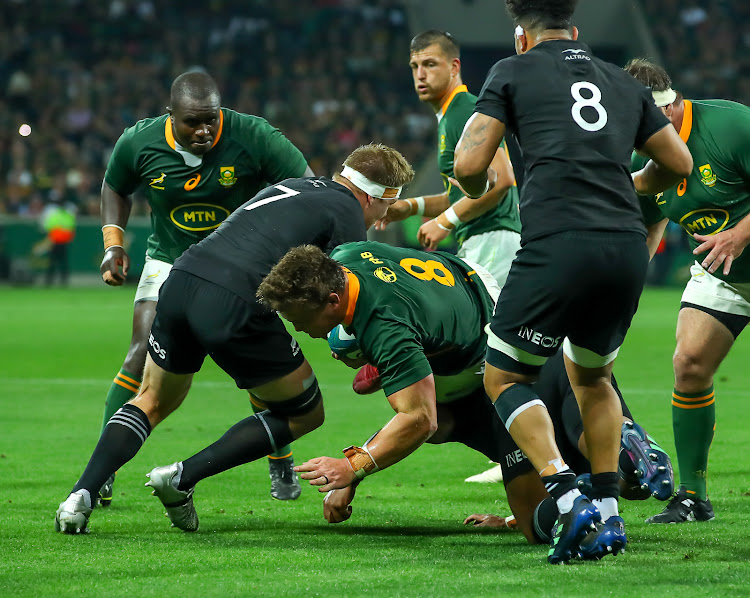 The Springboks produced a monstrous performance to pile more woe on bitter rivals New Zealand during their absorbing Rugby Championship clash at a sold-out and bouncing Mbombela Stadium on Saturday.

Backed by a raucous crowd of more than 40,000 people, the Boks rose to the occasion to beat the All Blacks 26-10 as they started this competition on a positive note.

With this result, Siya Kolisi and his men finally registered SA’s first win over New Zealand on home soil since 2014 when Pat Lambie slotted a 52-metre penalty in the dying minutes at Ellis Park.

This victory is going to increase pressure on visiting coach Ian Forster as the once-mighty All Blacks have now suffered three defeats on the spin following successive defeats to Ireland before they travelled here.

This was a solid team performance where inexperienced players like Kurt-Lee Arendse and Jaden Hendrikse grabbed their opportunities with both hands to prove that they belong at this level.

Arendse got proceedings going in the early stages with the opening try and Hendrikse, who was introduced to the match after an early injury to Faf de Klerk, dished out commendable performances.

The only stain in the otherwise near perfect evening for Arendse was a red card in the closing stages for a dangerous challenge in the air on Beauden Barrett.

The All Blacks were looking to stop the bleeding but they encountered a Bok side motivated by incredible Mbombela supporters who created an intimidating atmosphere.

With experienced campaigners like Sam Cane, Samuel Whitelock, Beauden and Jordie Barrett, Sevu Reece, Codie Taylor Aaron Smith and Ardie Savea, they could not get a favourable result in the Lowveld.

After powerful renditions of the national anthems, the match started on a sour note with De Klerk being stretchered off the pitch after being injured in a tackle inside the opening minute.

It appeared the injury was not as bad as initially feared as a smiling De Klerk rejoined his teammates on the bench a few minutes later after he received medical attention much to the delight of the fans.

The Boks went ahead in the tenth minute through Kurt-Lee Arendse who outran a few All Black defenders to touch down near the right side corner flag after he received the ball from Lukhyano Am.

Pollard found the middle of the poles with his conversion and he soon increased SA’s lead to ten points with his first penalty as they continued to rattle New Zealand.

In the closing stages of the first half, Jordie Barrett put the All Blacks on the scoresheet with a three-pointer from the kicking tee as they went to the break with the Boks leading 10-3.

The Boks regained their ten point advantage after 50 minutes when Pollard put away his second penalty and later executed a well-taken drop goal as SA continued to dominate the All Blacks.

There was late drama with two tries, first by Shannon Frizell to give New Zealand a glimmer of hope but Willie le Roux put matters beyond doubt on the stroke of the hooter with Pollard converting.

Nienaber impressed by eye-catching performances from Hendrikse and Arendse

POLL | Do you believe government is taking GBV and femicide seriously enough?

Durban girl dies a week after being critically injured in crash

From songstress to soapie star, Lois spreads her wings

‘I didn’t think about him’: Mohale opens up about cheating on Somizi

'We want to win everything,' says Dan Malesela after Royal’s third successive win over Kaizer Chiefs

‘Only chick with a payslip’: Devi Sankaree teases ‘Roast of Khanyi Mbau’

5300 GT Corsa to be delivered at Bizzarini revival in September

Chipmakers’ message for carmakers: Your turn to pay

WANDILE SIHLOBO: Zambia’s maize decline won’t cause a shortage in the region

SANDF on high alert: Is SA on the verge of anarchy?

‘We will do YOUR job’: Locals warn SAPS they’ll deal with zama zamas

WATCH | Ramaphosa ‘may deploy SANDF’ – due to UNREST [VIDEO]

Expert advice: Here’s why you SHOULDN’T be forcing your kid to share

EXPLAINER: What is at stake for investors in Kenya's elections?

How companies are tackling mental health in the workplace

Women’s Month: 5 gender-based violence cases that have made headlines in 2022

JOB ALERT: Run a pub and restaurant for the Queen of England

Wesgro, Dubai Tourism on mission to increase tourism in SA and UAE

US corporate bond investors don’t think the troubled run is over, survey shows

Aubergine moussaka: A hearty and delicious dish for the whole family

‘May he laugh and have the most fun’: Mzansi prays for Jeremy Mansfield

Missed the hiding? Watch highlights of the Springboks thumping the All Blacks!

Foster reaches for something to salvage

McCarthy a hit with Ronaldo and others at Manchester United: reports

Breaking Bread: How we understand sin

LATEST: Two Boks back, another two out ahead of All Blacks rematch

CYRIL RAMAPHOSA: We must celebrate the achievements of South African women