The Blitzboks were crowned 2021 HSBC World Sevens Series champions after winning the second of only two tournaments this season.

Blitzbok coach Neil Powell made all the right noises after winning the Edmonton leg of the HSBC World Sevens Series on Monday, which confirmed South Africa’s fourth title, but it rang a little hollow.

The history books will forever reflect that the Blitzboks added to their 2009, 2017 and 2018 titles with the 2021 crown, but this season, the 10-leg series was reduced to two tournaments.

Both were played in Canada – in Vancouver and Edmonton – and both were won by the Blitzboks. But they didn’t include perennial World Series powerhouses Fiji and New Zealand, who have 17 World Series titles between them, and the rising force of Argentina.

The decision by World Rugby to award a World Series title for a “competition” that was eight tournaments shorter than a usual campaign, and didn’t feature two of the three best teams, was a curious one.

In 2020, the series was cut short when the pandemic struck midway through, meaning New Zealand claimed the title with only six rounds played. That wasn’t ideal, but with 60% of tournaments completed, it sat more comfortably.

As Covid continued to cut a swathe through global sporting calendars in 2021, it became obvious that the Sevens World Series was set to be a victim of cancellations again.

As tournaments were culled from the schedule – Cape Town being one of the casualties – World Rugby, like all other sporting bodies, was left to operate in a crisis mode.

It’s unclear how much money World Rugby has lost with the cancellation of tournaments, but the figure must run into the hundreds of millions of rands. Losing the Cape Town Sevens has cost SA Rugby R35-million alone.

The Olympic Games further contracted the window of where and when they could make up time to reschedule tournaments. Tokyo 2020 was always going to be the focal point of the season and that was the main priority for all teams.

The Blitzboks slumped at the Olympics, losing to eventual bronze medallists Argentina in the quarterfinals while Fiji claimed gold and New Zealand silver in the men’s section.

Failure at the Olympics for Powell’s men – who played as Team SA in Tokyo and not as the Blitzboks – forced a rethink in approach.

Powell opted to back younger players for the Canada trip for South Africa’s first World Series games in 18 months. In a two-tournament shootout, with the chance to add another World Series crown against a weakened field to the Blitzboks’ impressive body of work over the past nine years, backing new blood was a worthwhile gamble.

Powell as head coach has now overseen three of the four titles South Africa has won, and while the 2021 title will always have an asterisk next to it, the Blitzboks beat what was in front of them.

The Blitzboks claimed the Vancouver leg of the World Series last weekend as well, going unbeaten in their 12 matches in Canada, which Powell attributed to the coming together of their defence and attack.

Muller du Plessis, now one of the team’s senior players, scored 11 tries in Edmonton, which equalled Seabelo Senatla’s single-tournament try-scoring record from Dubai in 2016. Du Plessis was one of the “older” players who really moved into a higher gear in Canada. 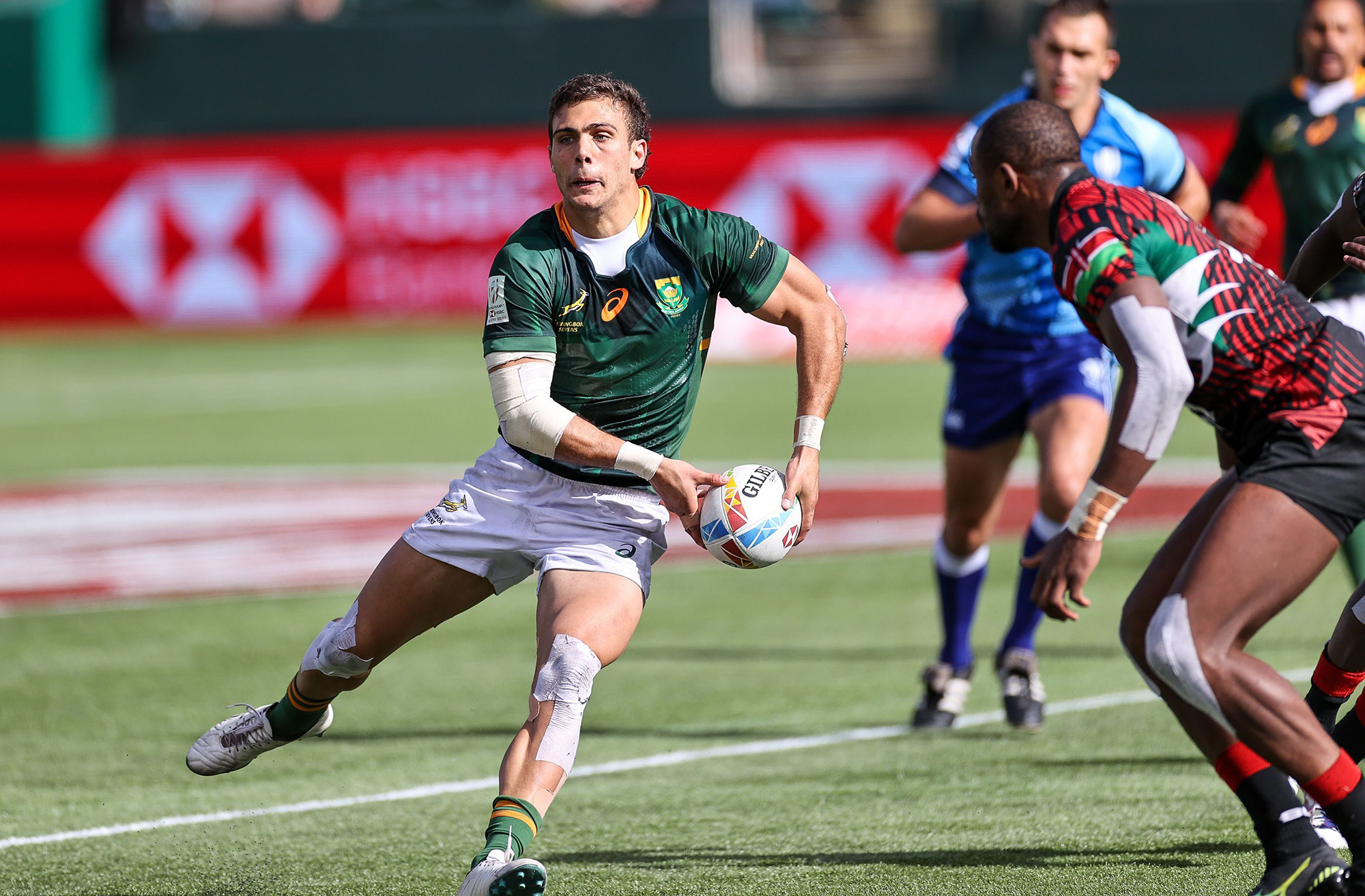 Muller du Plessis looks for support during the Blitzboks’ match against Kenya on day two of the HBC Canada Sevens at the Commonwealth Stadium in Edmonton, Canada on 26 September 2021. (Photo: P Yates / World Rugby)

“The guys really stuck to their guns out there and deserve all the credit,” said Powell after Edmonton.

“They implemented the game plan so well, and the results are there for all to see. We are a team that pride ourselves on our defence and only conceded four tries all weekend, but even more pleasing was the clinical nature of our attack. We really scored some excellent tries.”

The Blitzboks played on a different level to the competition in Canada, winning the Edmonton final 24-12 over Great Britain after thrashing Kenya 33-7 in the semifinal.

In all, over the two tournaments in Canada, the Blitzboks won 12 out of 12 matches and scored an incredible 489 points, averaging more than 40 points per game.

It was both an indication of South Africa’s ruthlessness and the porous nature of the opposition as Mexico, Hong Kong and Germany, who aren’t regulars on the World Series schedule, made up the numbers.

Powell acknowledged that without Fiji, New Zealand and Argentina, it did take some gloss off winning the World Series.

“You cannot deny that those three teams – having won gold, silver and bronze at the recent Olympics – would have enhanced the competition, but there was nothing we could do about that,” Powell said.

“We could only go out and deliver the best performances we are capable of, and I think we did that very well and for that I am massively proud. We still played against some very good teams out there.”

Powell handed four debuts in Canada, which showed that after the disappointment of Tokyo, it was time for fresh talent. But those four players – Ronald Brown, Darren Adonis, Shaun Williams and Christie Grobbelaar – have yet to experience the power and pace of Fiji and New Zealand in particular.

“I would have loved having them (Fijis and New Zealand) here in that they would have tested us in different areas of play – for example, Fiji are great at kick-offs, and it would have been interesting to see how our younger guys coped with that,” he said.

“Those teams protect the ball very well, too, so it is not as much the standards – which I thought were good at these two tournaments – but rather the variety of playing styles that I would have liked for our players to experience.”

They should have that chance later in the year when the 2021/22 season kicks off with two tournaments in Dubai in December, if there are no more Covid setbacks in the coming months.

Cape Town is also set to host the 2022 Sevens World Cup and the growth Powell’s team has shown since Tokyo has been impressive and confidence-boosting. Hosting and then winning the World Cup, on home soil, would be the absolute pinnacle for the Blitzboks and the impressive sevens programme Powell has built.

But there are still many hurdles to clear before that happens, as the pandemic hovers menacingly and the vaccination roll-out and uptake slows. DM

Sulscher on Rashford's social activities: Now he should prioritize football
The Prince of Cambodia refused to acquire Saint-Etienne
Dani Alves: If Barcelona thinks they need me, it's a matter of one call. I can still be useful
Lewandowski wants to move to Real Madrid. He will ask Bayern for a transfer (As)
Sarri about the calendar: Football is no longer a sport, but a show from which they are trying to squeeze as much money as possible
Calvert-Lewin is Arsenal's main target for the summer. Lacazette and Nketiah will leave for free
Tuchel about Newcastle: A new contender for the title. The Premier League is the most difficult league in the world, and it is getting more and more difficult

Crowns, cash, competitors: What you need to know about the Miss SA finale

‘A kiss can be just a kiss’: Gender justice expert fumes over rape ‘consent’ judgment

News24.com | PODCAST | The Story: Is dognapping on the rise?