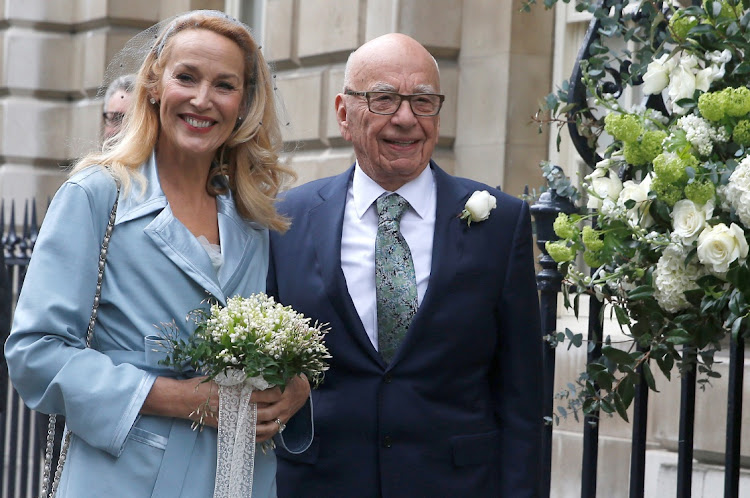 Actress and model Jerry Hall and media mogul Rupert Murdoch have finalised their divorce, according to a statement released by the couple.

The 66-year-old Hall filed for divorce in Los Angeles on July 1 from the 91-year-old Murdoch after six years of marriage, citing “irreconcilable differences” and seeking unspecified spousal support and attorneys' fees.

A statement released by Murdoch's attorney, Robert Cohen, and Judy Poller, a lawyer representing Hall, and provided to Reuters on Thursday, confirmed the couple had finalised their divorce but “remain good friends.”

Hall said in the petition filed with the Los Angeles Superior Court that she was “unaware of the full nature and extent of all (Murdoch's) assets and debts, and will amend this petition when the information has been ascertained.”

Murdoch married Hall in a low-key ceremony in central London in March 2016. The Fox Corp chair and his former supermodel wife were frequent fodder for the tabloids, which chronicled their wedding at Spencer House and the festivities surrounding the elder Murdoch's 90th birthday celebration last year at Tavern on the Green in New York City.

Murdoch's divorce, his fourth, was seen as unlikely to alter the ownership structure of businesses in which he holds stakes including Fox Corp, the parent company of Fox News Channel, and News Corp. Murdoch controls News Corp and Fox Corp through a Reno, Nevada-based family trust that holds roughly a 40% stake in voting shares of each company.

Hall previously was a longtime partner of Rolling Stones singer Mick Jagger, with whom she has four children.

Load-shedding to be reduced to stage 3 from Thursday morning

Zweli Mkhize’s branch says deciding to back him was easy

Load shedding to be reduced to stage 3 from Thursday

Load shedding to be reduced on Thursday – schedules here

Proteas set sights on points as ODIs start in India

Familiar movie names among the cast at Vaal meeting

STEVEN KUO: The second decade of the 21st century will be a white-knuckle ride

Govt must prioritise safety of tourists after murder of German, says DA

JUST IN: Three in police custody for murder of German tourist

Nurses refuse to work at two clinics in Motherwell

‘We are married’: ‘Big Brother Mzansi’s’ Thato and Gash1

Zas back in the mix: Stormers hope their gasman hits deck running on tour

Khayelitsha residents to meet with Cogta's Nkadibeng over service delivery

‘There is something he has in terms of playing’: Royal coach Nteo on Andile Mpisane

Theatre-owner Ambassador eyes direct lending deal of up to £1.2bn

LETTER: Eskom board does not have full freedom

‘There is something he has in terms of playing’: Royal coach Nteo on Mpisane

THALIA PETOUSIS: Why the commodity boom cannot be counted on to see us through tough times

Tips for seniors to capitalise on high interest rate

MaMkhize says Royal AM have not fired coach Khabo Zondo

Venison pie: A rich, heartwarming meal for the whole family