Tales from the Past: Rock of ages: Wartime graffiti reveals the tragic story of outlaw Boer women and children

Across the Telperion shelter, not far from Bronkhorstspruit in Mpumalanga is rock art that is possibly hundreds or even thousands of years old. The most recent appears to be the Boer graffiti, that dates from around the time of the South African War of 1899 to 1902 (Photographs supplied by Tim Forssman)

From hiding in the bush to being interned in a British concentration camp, their story of survival would have been lost forever had they not scrawled their initials on a rock face.

Deep in a ravine, hidden from the soldiers looking for them, a group of outlaws found refuge in a rock shelter.

These outlaws were no bandits, they were women with young children and the men they were hiding from were the British soldiers and the Boer turncoats who sought to intern them in one of the many concentration camps.

The story of these unlikely outlaws would have long been forgotten had it not been that they scrawled their names in white paint across the wall of the shelter.

That graffiti would become the starting point of a tragic story of one family’s survival in a time of war. 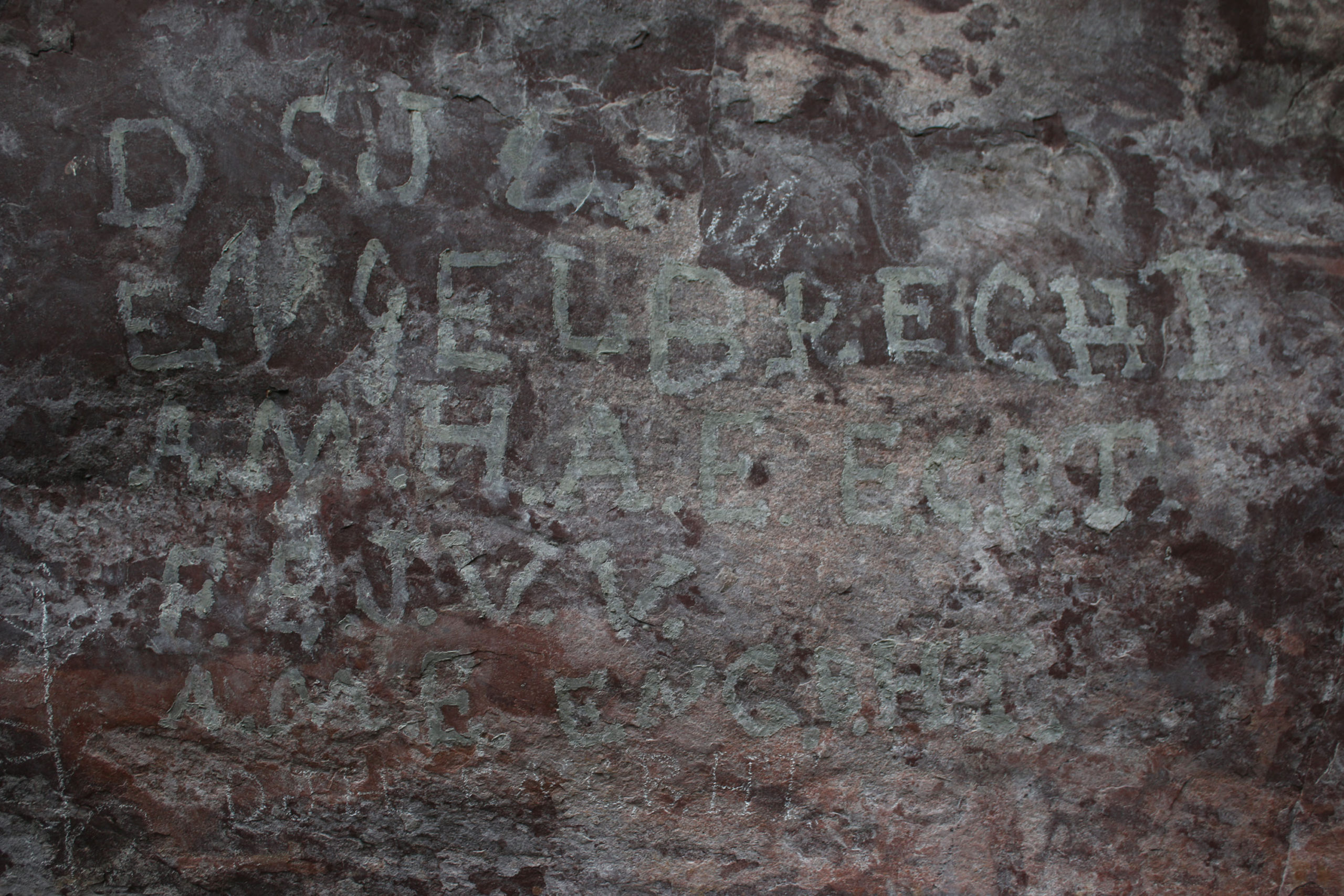 The Engelbrecht family left their names in the shelter, in an act of defiance against the British, researchers believe. Photo: Tim Forssman

The Telperion shelter lies close to the Wilge River, not far from Bronkhorstspruit in Mpumalanga. On the walls are the images of women in crinoline dresses, typical of the Victorian era. Then there is the name  Engelbrecht that is repeated several times, with the initials A.M.H.A.E, ‘D.S.J.’ and A.M.E.

When University of Pretoria archaeologist Tim Forssman visited the site,  he had no idea that the names were linked to the South African War.

That was until a manager on the farm told them a story that had been passed down about the shelter and the people who hid there during the war.

The story goes that Boer and black families took refuge at the site, as they avoided patrolling British soldiers. Nearby, in a field hidden by poplar trees, they planted crops. And they had a pig that would eventually get them into trouble.

“So they were cultivating inside this poplar thicket when the pig escaped and some British troops passing by happened to notice the pig and followed it and there they found the women and children,” says Forssman.

The story became more believable when Forssman started digging through the archives and put names to the initials he had found in the shelter.

A.M.H.A.E, Forssman believes, was Alida Maria Hendrika Aletta Engelbrecht, who was 42 when the war ended in 1902.

The initials DSJ possibly belonged to her husband, Daniel Stephanus Johannes, and A.M.E to her 22-year-old daughter, Anna Magdalena Engelbrecht.

The Engelbrechts had lived on the farm Sterkfontein, close to the shelter. 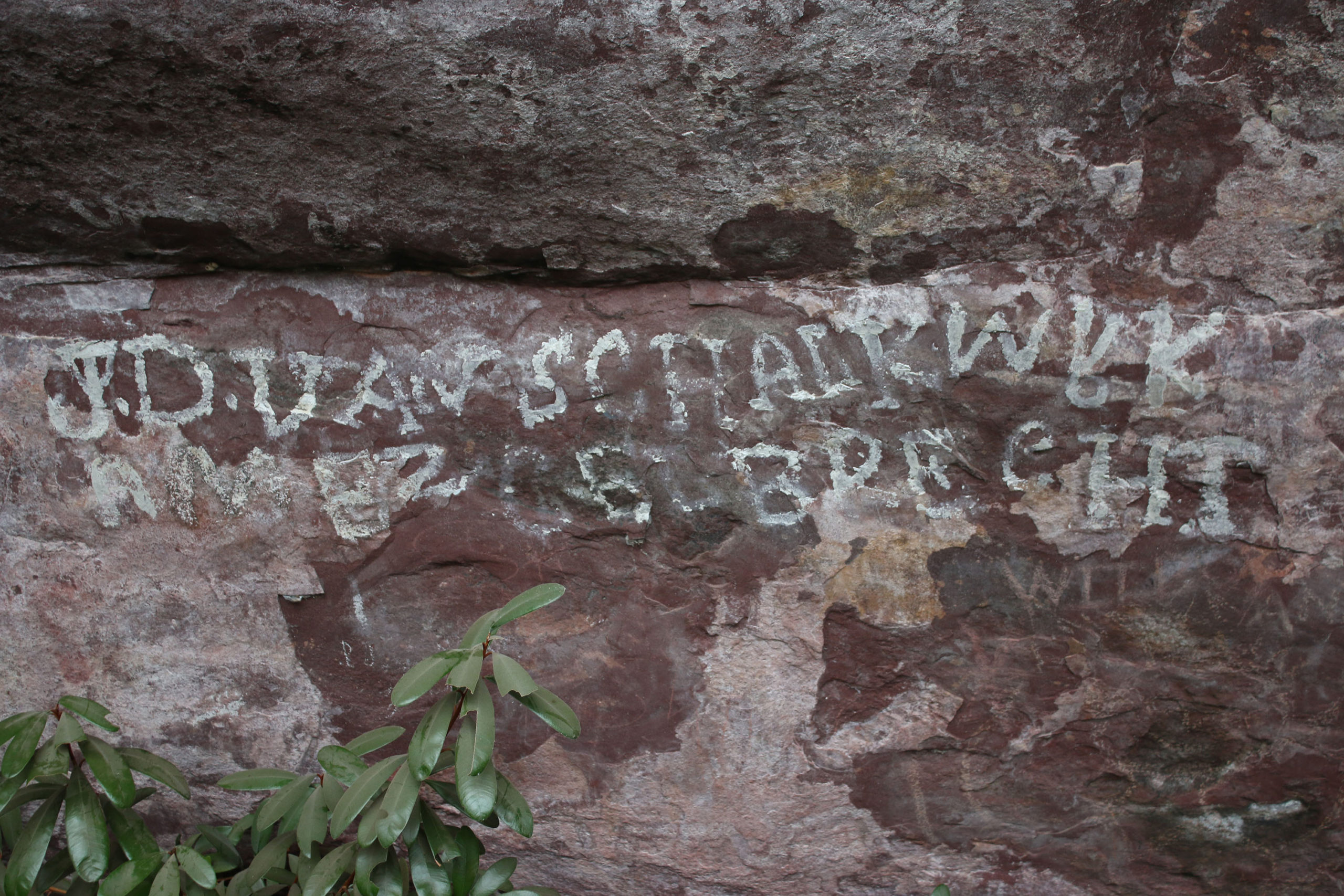 Their names were clear enough to make out that archaeologist Tim Forssman was able to find reference to them in the archives. Photo: Tim Forssman

Then on 1 April 1902, Alida, with Anna and seven more of her children, arrived at the Balmoral concentration camp, in what is now Mpumalanga.  This might have been shortly after they were outed by their pig at the shelter.

Their arrival came at a time when the South African War was in its final stages. The few Boer commandos that were still fighting were waging a guerrilla campaign against the British, using hit-and-run tactics against an army that continued to grow as reinforcements flowed not only from the UK, but the colonies, too.

The British, in turn, had introduced a scorched-earth policy. They burnt Boer farmhouses, torched crops and confiscated livestock and anything else the commandos could use.

Women and children were forced into the infamous concentration camps. It was in these camps where tens of thousands of Boers and black South Africans would die from starvation and disease.

Records show that when they arrived at the Balmoral camp, Alida’s husband Daniel and her 15-year-old son Abraham were already there. They appear to have been part of a commando that surrendered on 9 March. 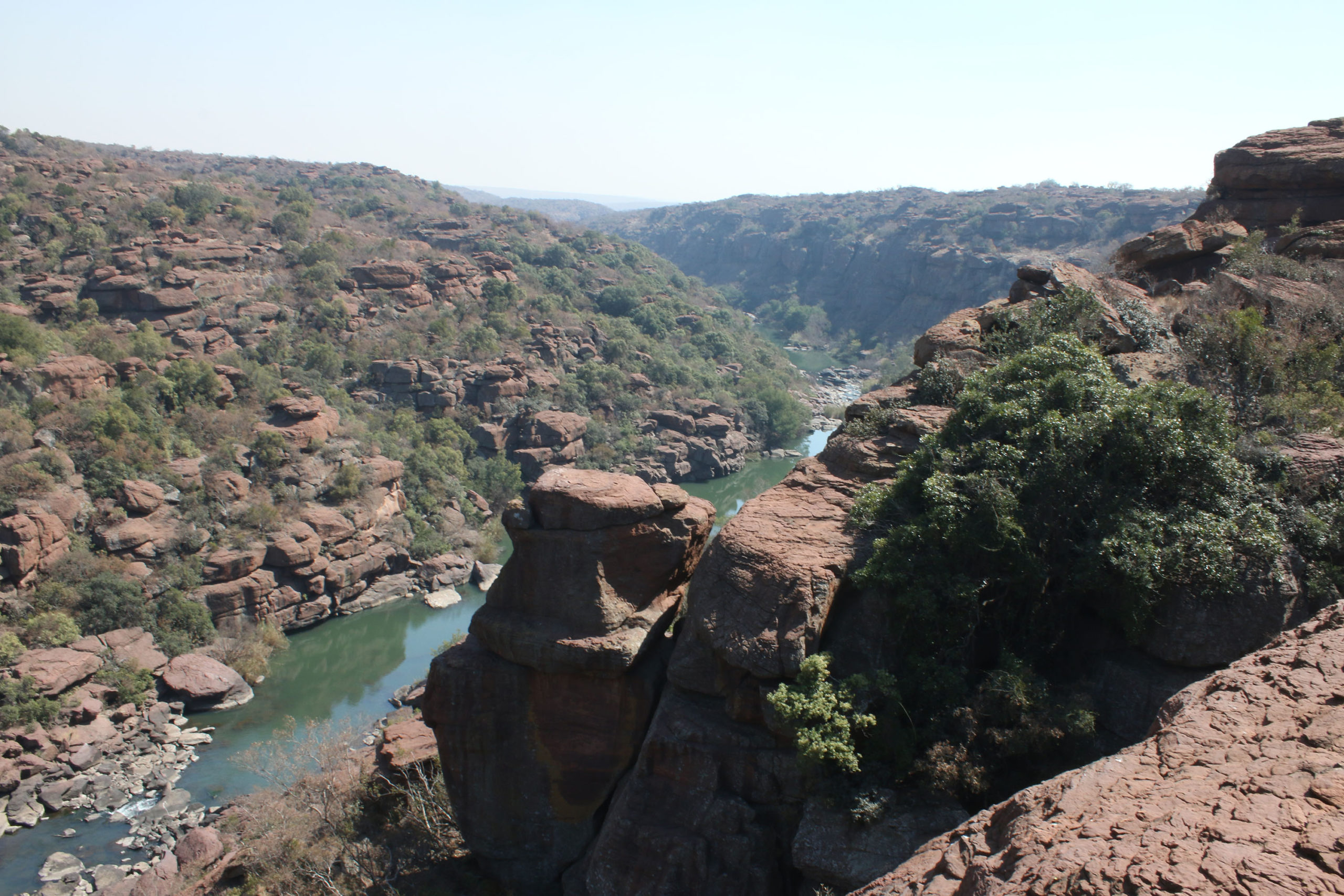 The shelter was hidden in a ravine, close to the Wilge River. Even so, they were eventually caught by the British. Photo: Tim Forssman

The Engelbrechts would not stay there for long. On 21 May 1902 they were moved to the Middelburg concentration camp. Forssman finds the  timing of this move interesting.

His son Abraham joined him as a member of the National Scouts, which employed former Boer soldiers to fight for the British.

The Engelbrecht women were released from the concentration camp in August, two months after the war ended.

The story of the Engelbrechts highlights a lesser-known part of the South African War, says historian Dané Swanepoel of the War Museum of the Boer Republics

“When talking about women in the war, it’s more focused on the concentration camps. Although we do know about women surviving in the veld, it is not the first thing that comes to mind.”

The story of these women is told in the diaries they left behind.

Forssman says there were as many as 14,000 Boer women and children hiding in the bush by the time the war ended.

It took months to let people know the war was over.

What Forssman and his colleagues have tried to work out is why the Engelbrechts left their names in the shelter, possibly at a time when doing so could have given them away to the British.

“We thought about it a lot, but we see it as an act of defiance. That they are saying we are not afraid of the British, we have an identity. And this is our land and here is where we belong.”

A patchy paper trail followed the Engelbrechts after the South African War. It tells of sorrow and economic hardship.

On 1 August 1908, Alida’s son, Daniel Hendrik Johannes, died in a shooting accident. On his death certificate his moveable assets were recorded as being 15 bags of maize and “half a share in a horse”.

Seven years later tragedy struck again when Abraham was killed in German South West Africa during World War 1. The Boer soldier who had chosen to change sides was fighting for the British again.

With a trembling hand Alida signed his death certificate. Unlike the careful script left in the shelter years before, her name this time trailed off downwards in an intelligible scrawl.

She was living in Lange Street, Middleburg, not far from the concentration camp where she had been reunited with her husband and son 13 years earlier. 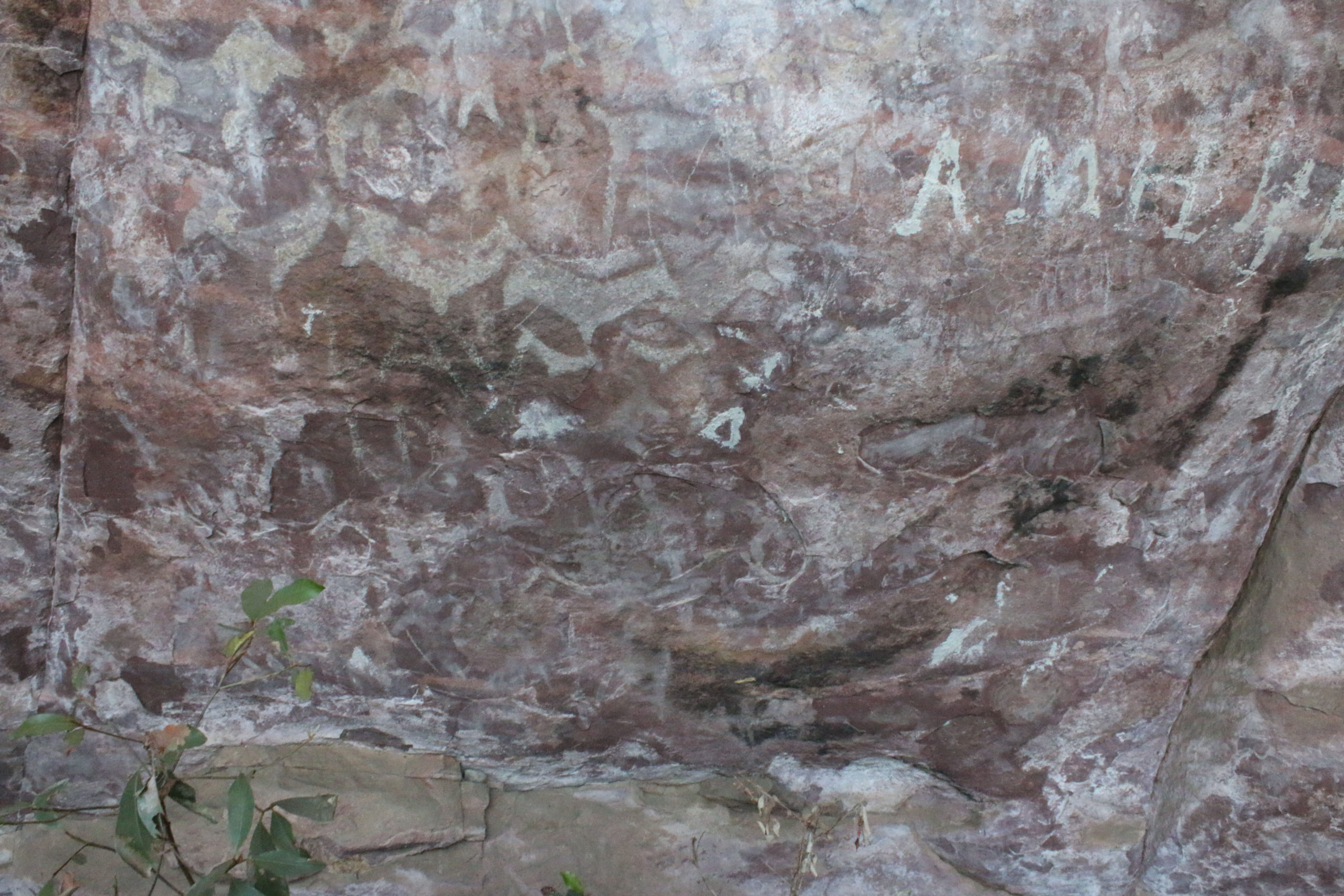 Not only did the Boers leave graffiti on the walls of the shelter, the San, the Khoi and possibly the Ndebele or the Sotho, left images too. Photo: Tim Forssman

There the paper trail stops.

After Forssman posted some of this research online, he was surprised when he was contacted by a relative of the Engelbrechts.

Karl van Rensburg is Alida’s great-great-grandson. He lives in the UK, and didn’t know the family’s Boer War story. Since then he has been delving into online archives and plans to visit the Telperion shelter once the Covid-19 pandemic restrictions are lifted.

“It reinforces the heritage you have, because it is incomprehensible to think of them hiding out in the veld with a one-year-old child. These were serious people and this was absolute survival,” says Van Rensburg.

There is more work to be done in the shelter. Besides the Boer graffiti, there is other rock art that might stretch back hundreds or even thousands of years. The rock face has been a canvas to the San, the Khoi and possibly the Ndebele or the Sotho.

But in the case of the graffiti there is a strong link to the present.

“If it wasn’t for the story, we would not have investigated those names,” says Forssman. DM

And to show what a donkey kick is in football? 50 Years ago in England they scored the best goal of the season
Sulscher on Ferguson's words about Ronaldo: We all want to see Cristiano on the pitch because of his uniqueness. But he can't play in every match
Pep on the requirement to stay on top: People judge me not by trophies, but by what will happen tomorrow
Joan Laporta: The Super League is alive, it will replace the Champions League. Juve, Real Madrid and Barcelona continue to win in the courts
Karim Benzema: Clasico remains the best match in football. It doesn't matter which players are playing
In favor of PSG, after the VAR, they awarded a penalty for playing with their hand. Perhaps Icardi had fouled before
Arsenal defender White: I don't watch football. All I want when I come home is not to think about him