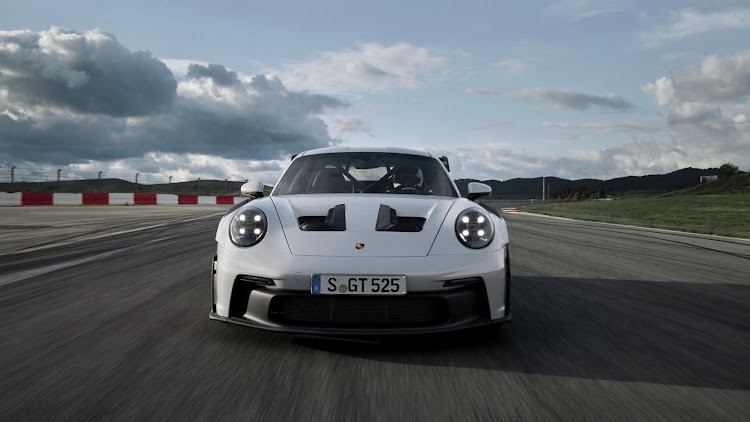 Large nostrils on the front lid channel hot air upwards and outwards over the roof to ensure cooler intake temperatures at the rear.
Image: Supplied

It's always a good day when Porsche unveils a new 911 — particularly when it's a GT3 RS.

An evolution of the standard 992 GT3 that launched last year, the new GT3 RS is pretty much a street-legal race car that adopts technology bred out of the German marque's most recent motorsport exploits. This starts with the inclusion of the innovative central radiator concept that was first used in the Le Mans class-winning 911 RSR and subsequent 911 GT3 R. By negating the need for three separate radiators (as was the case in previous GT3 RS models) and consolidating to a single unit mounted at an angle where the frunk used to be, Porsche has freed-up space and introduced new active aerodynamic elements.

Indeed, run your peepers over the sharp-end of this track-bred beast and you will notice that the front spoiler of old has been replaced by an all-new splitter that divides the air flowing over and underneath. While sideblades direct air outwards, improved front wheel arch ventilation is provided via specially engineered louvred openings cut into the front wings. 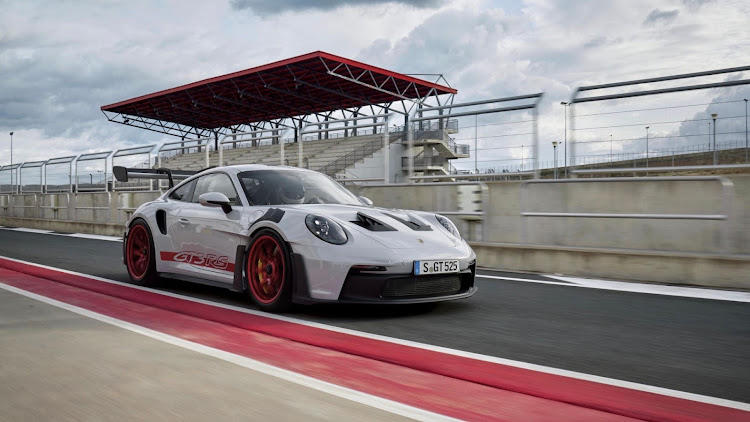 Porsche has also added inlets behind the front wheels (a nod to the iconic 911 GT1) that help to reduce the dynamic pressure inside the actual wheel arches. Sideblades behind the intake ensure that the air is directed down the side of the vehicle while hot air from the central radiator flows out via large nostrils on the front lid where it is then channelled upwards and outwards over the roof to ensure cooler intake temperatures at the rear.

Staying at the aft end of this menacing machine you'll notice that the GT3 RS packs a new swan-neck-supported rear wing that consists of two key elements: a fixed main wing and an upper, hydraulically adjustable wing element that's used to facilitate an all-new drag reduction system (DRS). You also get a bespoke set of rear wheel arches fitted with an intake and a sideblade for optimised airflow as well as a re-engineered diffuser.

Add all of these wind-tunnel tweaked advances together and you get a sports car that creates a mightily impressive 409kg of total downforce at 200km/h — twice as much as its 991.2-generation predecessor and three times as much as a current 911 GT3. Keep your right foot planted and at 285km/h this figure increases to an astounding 860kg. Crazy. 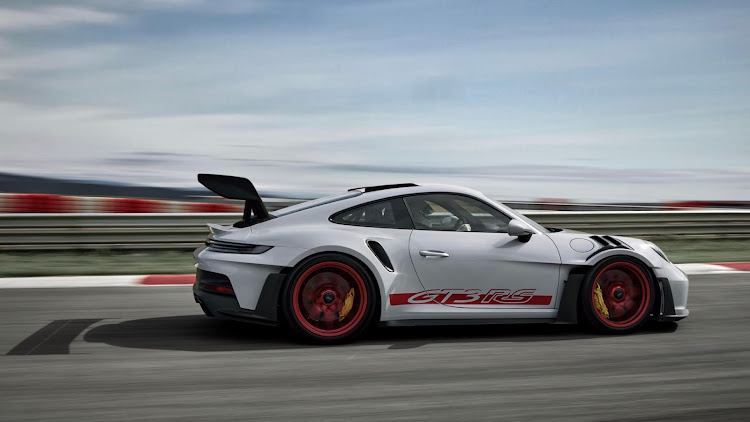 The doors, front wings, roof and front lid are all made from CFRP. As such the GT3 RS tips the scales at just 1,450kg.
Image: Supplied

But of course there's a whole lot more to the GT3 RS recipe that improved aerodynamics. Under the rear deck lid lurks an upgraded 4.0l six-cylinder naturally aspirated boxer engine that pumps out 386kW — 11kW more than the standard GT3. This increase in power was achieved by fitting new camshafts with modified cam profiles. Porsche also bolted in a single-throttle intake system and a motorsport-derived rigid valve drive.

This increased muscle is channelled straight to the rear wheels via a seven-speed PDK transmission that sports a shorter overall gear ratio compared to that of the unit found inside the regular 911 GT3. This gearbox further benefits from special underbody air intakes that improve cooling even under the most demanding of track driving conditions. In terms of performance figures, Porsche claims that the new GT3 RS will storm from 0 to 100km/h in a mere 3.2 seconds and reach a maximum speed of 296km/h in seventh gear.

To keep these insane velocities in check both on the street and at your favourite circuit, Porsche has equipped the GT3 RS with an absolutely mighty braking system. Up front, aluminium monobloc six-piston fixed-calipers clamp down hard on gigantic 408mm rotors while at the rear you'll find four-piston fixed-calipers and slightly smaller 380mm discs. Customers can also choose to spec the optional Porsche Ceramic Composite Brake (PCCB) system with 410mm discs on the front axle and 390mm discs on the rear axle. 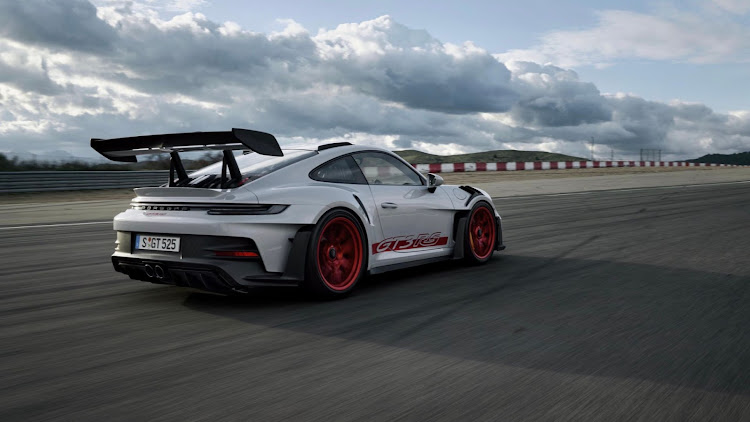 No matter which set-up you choose, both reside behind a set of gorgeous forged light-alloy centre-lock wheels. Staggered in size they are shod with road-legal sports tyres (Porsche hasn't divulged what brand) measuring 275/35 R20 up front and 335/30 R21 at the rear. As such mechanical grip promises to be impressive and is backed up by an array of suspension modifications in keeping with the track-biased nature of the GT3 RS.

These include a wider front track (+29mm over the GT3), longer double-wishbone front axle links with an aerodynamic teardrop profile as well as front lower trailing arm ball joints set lower on the front axle; a feature that helps to reduce pitch under braking. The multi-link rear axle has also been adjusted with modified spring rates, while the driver assistance systems and rear-axle steering have been tuned for a much more dynamic feel.

From the factory the new 911 GT3 RS offers three driving modes: Normal, Sport and Track. Select the latter and you can (via rotary controls on the steering wheel) make individual and incremental adjustments to the suspension's rebound and compression settings on both the front and rear axles. Just like in some GT-spec racing car the aggressiveness of the torque-vectoring limited-slip differential can also be adjusted in a similar manner as can the slip of the traction control. The steering wheel also holds a button that actives the car's drag reduction system. Yep, this is some properly next-level driving technology.

A Clubsport package is available at no extra cost and when ticked bolts in a steel rollover bar, hand-held fire extinguisher plus six-point seat belts for the driver. Customers can also specify the cost-option Weissach package that applies a raw carbon-weave finish to the front lid, roof, parts of the rear wing and the upper shell of the exterior mirrors. The front and rear anti-roll bars, rear coupling rods and the shear panel on the rear axle are made of CFRP, which serves to further sharpen the car's enviable driving dynamics.

In terms of pricing the new Porsche 911 GT3 RS starts at R4,153,000 including a three-year/100,000km Driveplan. Customer deliveries are expected to start early next year.

'I want SuperSport to challenge for league titles again'

ICYMI: Woolworths trials ‘bag share’ at these 4 stores – and dumps ALL plastic bags!

WATCH: Malema accuses judge of being ‘captured’ by politician

The win against Pirates is behind us now: Sekhukhune coach Tembo

‘Generations: The Legacy’ review: Fikile leaves Mazwi at the alter

'There are 11 other cases on tourism road'

WHO: Cough syrup from India may be responsible for 66 Gambia child deaths

Want to become a millionaire? Studying these SIX subjects will help

Measures are in place to ensure safety of tourists - Minister Sisulu

'Woman King' is worth watching: but be aware its take on history is problematic

Study the blood, but beware the nick, geek

'The DA whines more about its coalition partners than it does the ANC': Phumzile Van Damme

Phalatse: DA is not an arrogant coalition leader

Gambia: WHO Issues Alert on Four Drugs That May Be Linked to Death of Dozens of Children

WATCH | This chef ran away from home – and never looked back

On This Day in South Africa: What happened on 06 October?

Nigeria: Why Hushpuppi Should Spend At Least 11 Years in Jail - U.S. Government

Daily devotion: Your bible verse and prayer for 06 October 2022

Questions raised over sale of public park in Louis Trichardt

WORST of the heatwave expected TODAY in parts of South Africa

LISTEN: Who is spying on André de Ruyter?

Banyana arrive in London ahead of Australia friendly

South Africans should make peace with the fact that the country is in trouble, says economist

REVIEW: Suzuki Celerio is a pint-sized fuel sipper with some comforts

Families displaced by floods in 1976 still waiting to be housed

The Ukrainian city that refuses to say die

ANC should be grateful to the EFF’s flip-flop approach

Basic income grant: more money in poor people’s pockets, but at a great cost to economy

Bavuma needs to lead from the front

Teachers are the unsung heroes

Are we still cultivating a nation of passionate professionals?