THE PROMISED LAND: Women on Farms Project calls for moratorium on farm evictions

President Cyril Ramaphosa’s Women’s Day address in Paarl in 2018 was disrupted by protesters who called for him to sign a moratorium on farm evictions. (Photo: Leila Dougan)

Women’s access to land and their continued eviction from farms was the subject of a webinar held by the Farmworkers and Dweller advocacy group on Tuesday.

The webinar, held by the farmworkers and dweller advocacy group, called for farm women to have access to land and for an end to farm evictions. 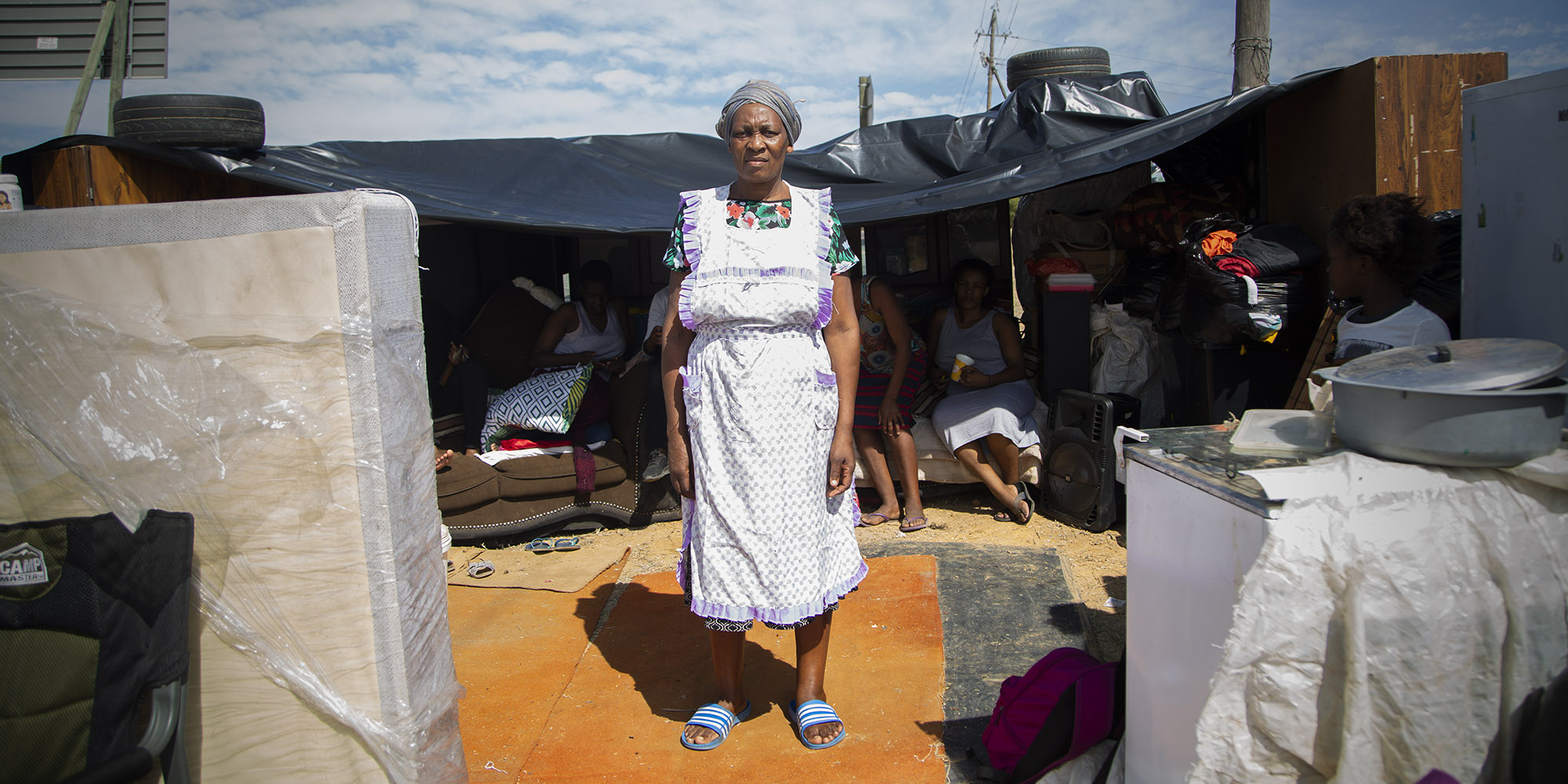 Sweetness May stands among her belongings after she and her family were evicted from Windemeul Kelder wine farm in Paarl. They were living on the side of a road opposite the farm they once called home. (Photo: Leila Dougan)

Solomons said Covid-19 has highlighted that, “as farmworkers, we are completely dependent on white male farmers for jobs and accommodation”.

She said since 1994 there have been improvements such as labour laws and rights for farmworkers, but the landscape of the agricultural economy needs to change. She pointed out that while white, male farmers now have more money and more rights, the workers – mainly black women who are seasonal workers – “are getting more and more poor”.

Also discussed was the promise of a moratorium on evictions, which had been ordered by then-deputy president Cyril Ramaphosa in 2014, according to a report in City Press. But, Louw said, the group was “still waiting on the promises he made many, many years ago”.

One such eviction is that of Fransina Petersen, a mother of three. Petersen was born on a farm in Klapmuts, in the Cape Winelands and worked on the farm. In February 2020, following an eviction order, she was kicked off the farm. She currently lives with her mother-in-law and said, “I sleep in my car, so my children can sleep in the room.”

Explaining how Petersen was removed, Louw said she ended up in a “municipal graveyard – that’s where the sheriff dumped her”.

Read in GroundUp about Petersen’s eviction here and the response by the owner of the farm, Lance Bouma, here.

Dawn Jacobs, an activist with the Drakenstein Civic Organisation, said: “It breaks my heart that the president doesn’t want to make a moratorium on evictions.”

She also questioned when expropriation without compensation would occur, saying there were 10 farms without owners within the Drakenstein municipality.

“Why can’t the municipality build houses for farmworkers there?” she asked.

Daily Maverick has previously reported on a march held by Women on Farms calling for an end to evictions:

Farmworkers demand their rights while 20,000 in Drakenstein municipality face evictions

The group submitted a memorandum electronically to the Department of Agriculture, Land Reform and Rural Development. The memorandum, which Daily Maverick has seen, was addressed to minister Thoko Didiza and deputy minister Mcebisi Skwatsha, and said “due to the various impacts of Covid-19, including the ban on the transportation, export and ban of alcohol sales, thousands of farmworkers, especially women seasonal workers, face imminent job losses. Job losses will inevitably lead to greater numbers of farm evictions.”

Pjanic on Barca: the Team is doing very well, we are ready. Koeman told me to be myself
Fede Valverde on Messi's desire to leave Barca: There were no messages on this topic in the Real Madrid chat
Gary Neville: Manchester United won't win the Premier League until they sign a mobile centre-back
Van de Beek after 1:3 with Palace: Happy to make his debut for Manchester United, but disappointed with the result
Jurgen Klopp: Transfer activity shows Chelsea's ambitions
Andrea Pirlo: I'm in Juve and I work with a team full of Champions. I have no doubts, only confidence
Even Zidane listens to Marseille rap. The city is steeped in hip-hop, and the club promotes aspiring rappers
Source https://www.dailymaverick.co.za/article/2020-08-04-women-on-farms-project-calls-for-moratorium-on-farm-evictions/

Charl Kinnear’s son: ’My last conversation with him was 30 seconds before he was shot’

South Africa: New Horizons Is an Ode to Fresh Sounds

Zimbabwe: Khupe Faction Rebrands to MDC Alliance Ahead of By-Elections

Tanzania: 'Aviation Outlay Worth It'

Rafael Nadal not interested in excuses after Rome exit

A rapper, an elevator and a camel: the stories Ruth Bader Ginsburg told

Finally, a first glimpse of what White’s Bulls will be all about

LISTEN: No tears for Cardi B over Offset split

Sleeping soundly: The importance of a good night’s rest

Educators requested to report for duty from Monday

Oops, says Emmy: 'This Is Us' actor gets award after mix-up

In the New Normal mobile data is our fuel, so make it cheaper please

US declares Iran UN sanctions back in effect

Girl’s suspected killer helped in 12-day search for her

11 suspects nabbed for cable theft, drinking and driving in Kempton Park and Boksburg

Caster is down but not out, as she prepares for new battle

Wolff has US Open win in sights, but Oosthuizen still in with a shout

Will the SAA rescue deal fly?

COVID-19 LIVE UPDATES | Did SA get it right when tackling the coronavirus pandemic?

On a wing and a prayer

Ride the crisis by ensuring good value from financial products

HILARY JOFFE: Compacting and consulting while the economy circles the drain

Bidvest aiming to clean up overseas

Sanral runs out of road on e-toll indecision

My Brilliant Career: Professional gaming isn’t all fun and games