A woman fills her bucket from a trickling tap. The local municipality reported the theft of a 70mm pipe and said they have replaced it with a smaller pipe thus giving off a lower pressure. (Photo: Shiraaz Mohamed)

Furious residents from Motlhabeng Village, Mahikeng in the North West have been without water for days and have accused the local municipality of not caring about them.

Some residents have boreholes in their yards, while others have taps installed, but a large number rely on water supplies from communal pumps. This has caused great dissatisfaction in the community and now, they are forced to seek water from neighbours with boreholes or walk to nearby villages because their communal taps have little to offer. 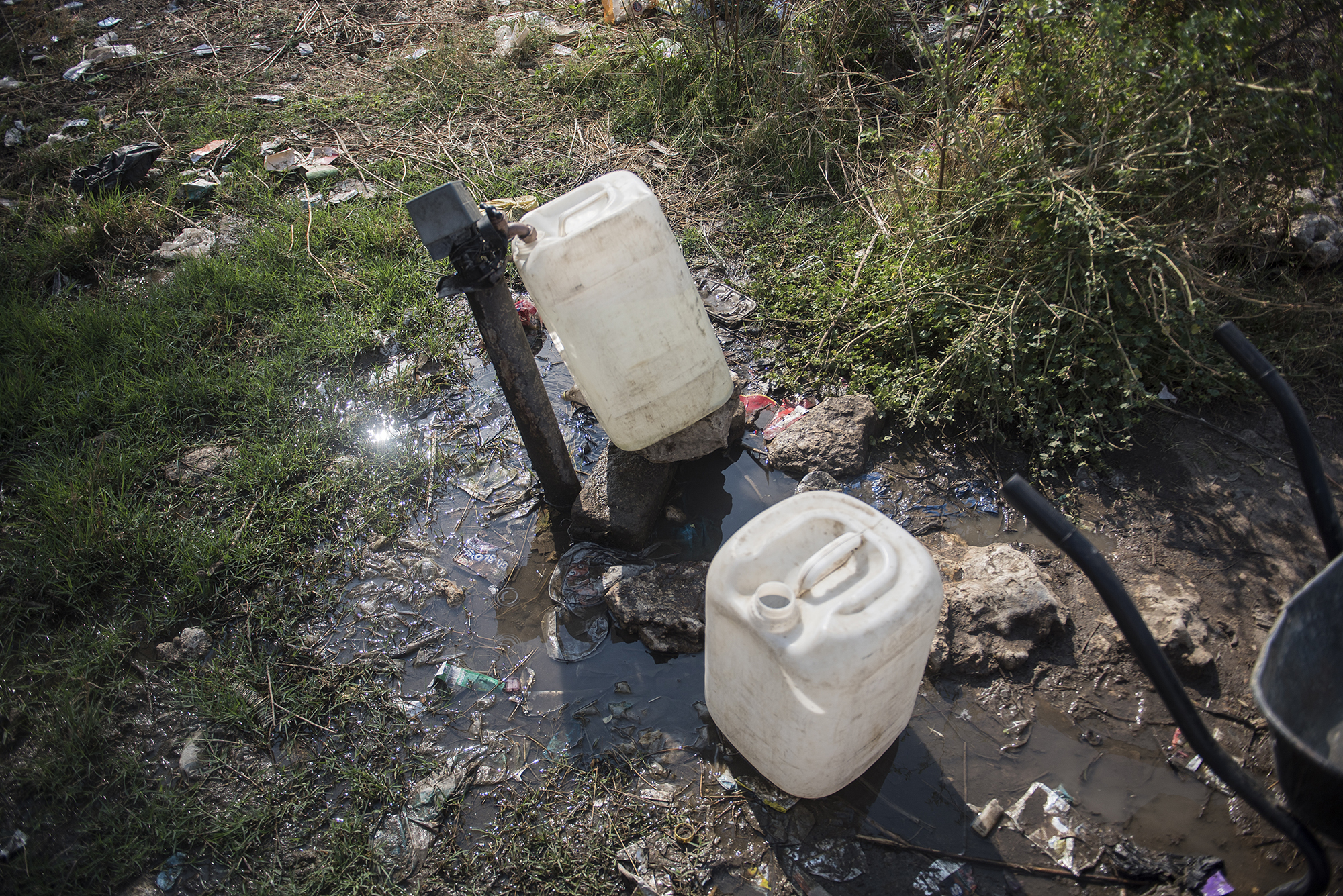 Daily Maverick visited Mahikeng and found several residents waiting to collect water from a tap. The water trickled out and residents complained that it was not fit for drinking. 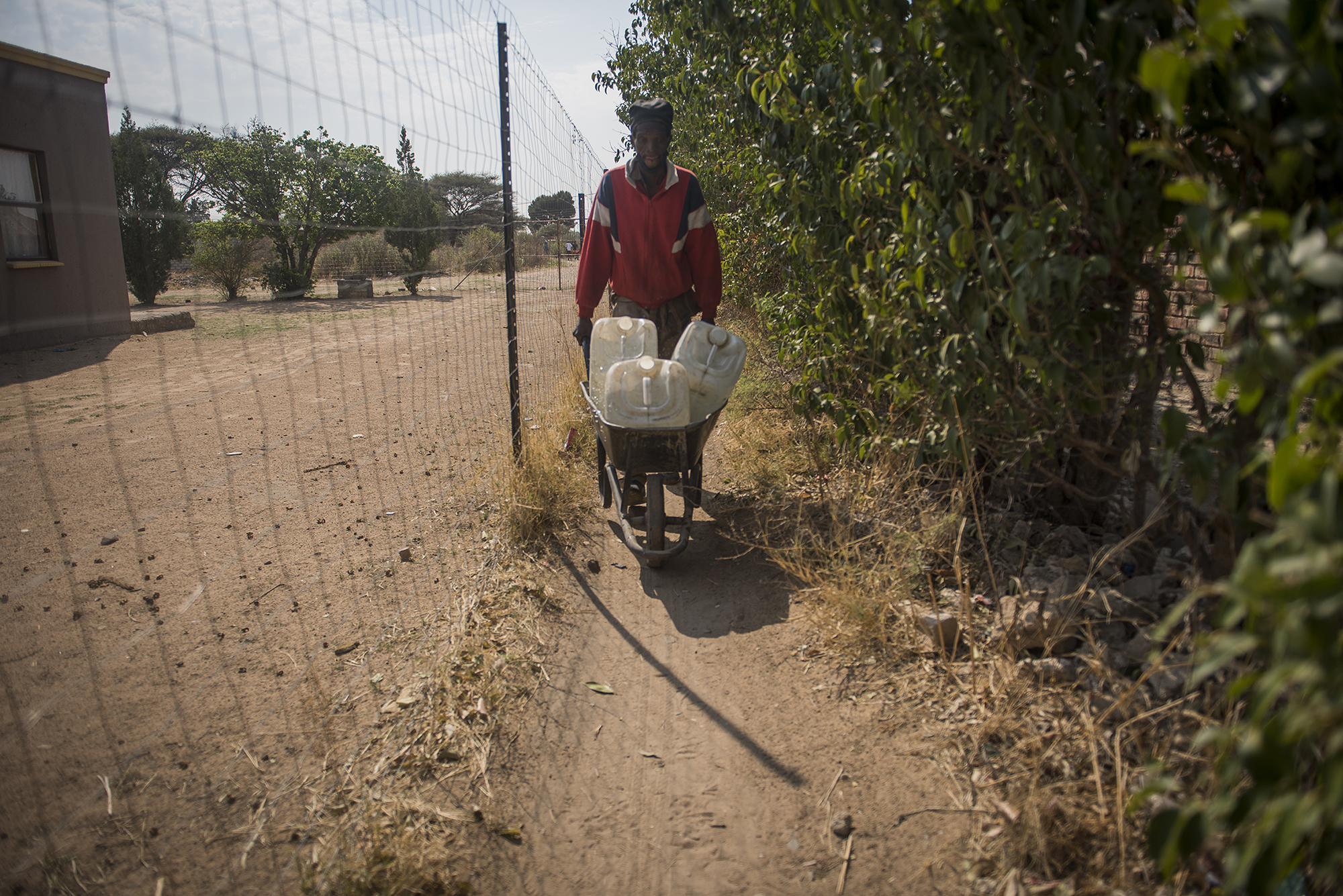 Martin Matanye makes his way back home after filling his containers with water. Matanye spent more than an hour waiting for his containers to fill due to low pressure from a single tap that serves a community. (Photo: Shiraaz Mohamed)

Thapelo Makhwaya, who had waited over an hour for his turn to collect water said, “This water is an issue. There are only three communal taps where we can get water from but for the past four or five days we have been left without any water. Today the water is coming out slowly but it is also dirty and smelly.” 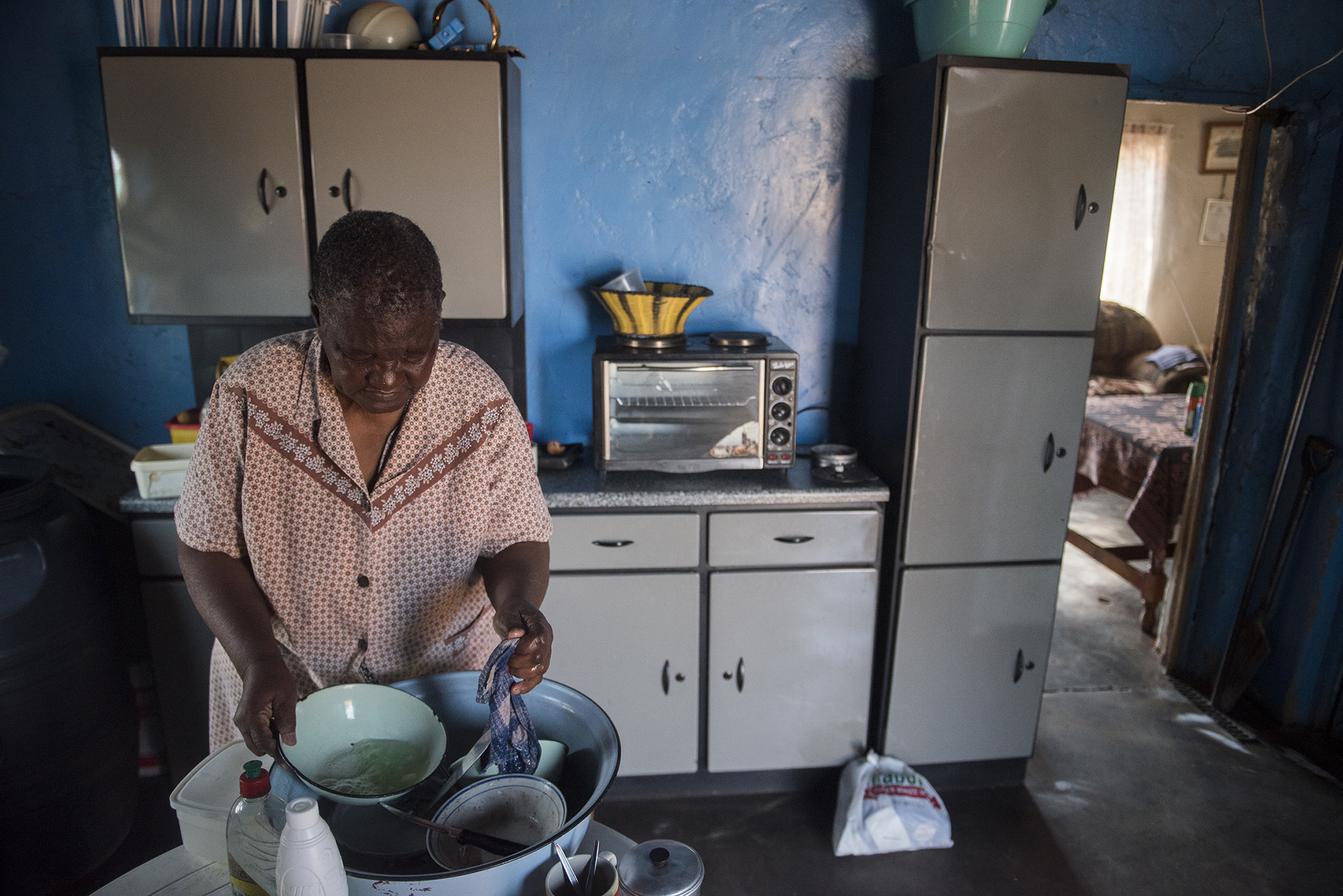 Keamogetse Mogotsi washes dishes in her kitchen. Mogotsi does not have a tap or a borehole in her yard and rely’s on her nephew to collect water for her. (Photo: Shiraaz Mohamed)

He is one of many disgruntled residents. “Our municipality is disappointing us. I mean, so long without water? We cannot talk to our ward councillor because he does not listen to us. We have tried to but now we have just given up on talking.” 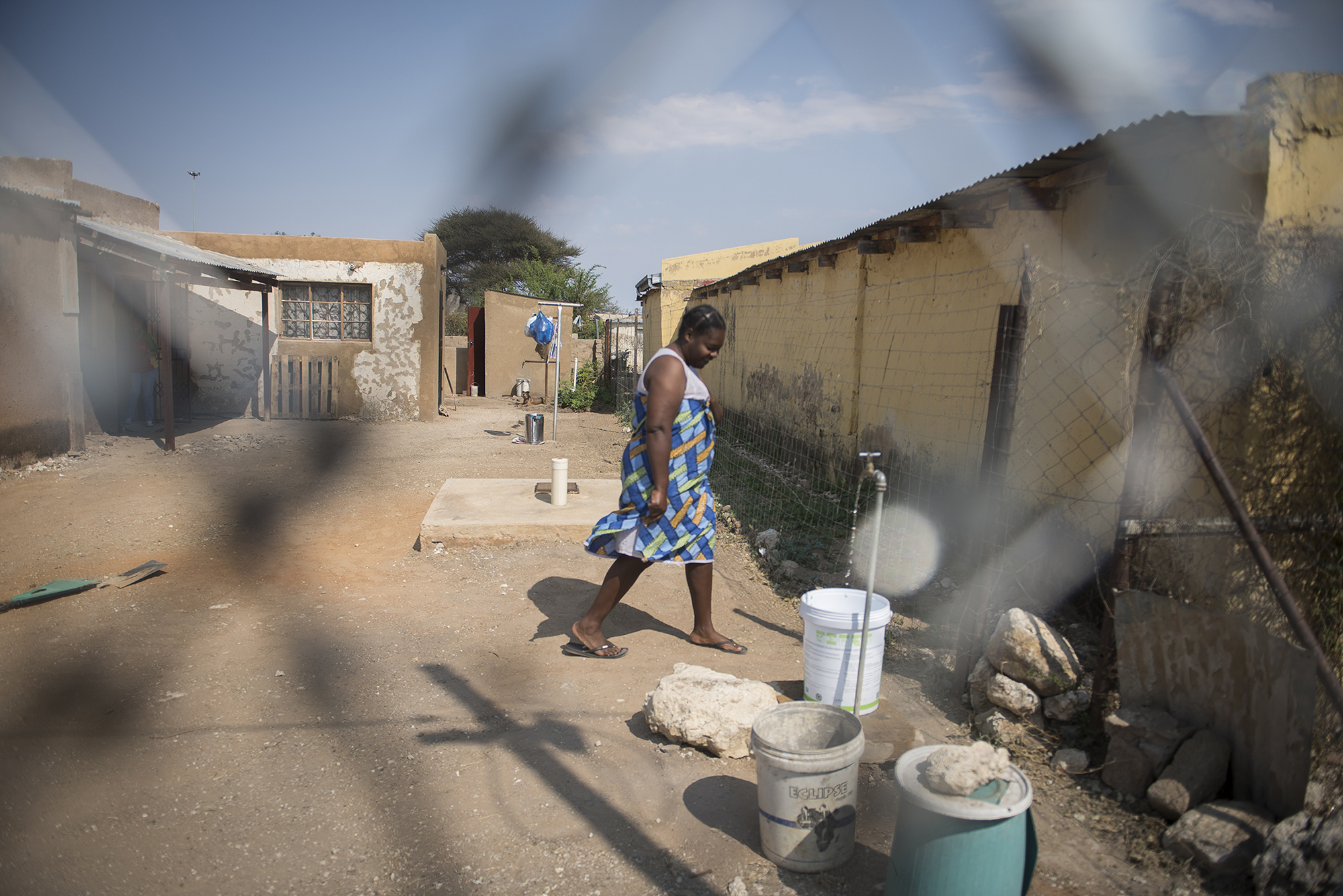 A woman fills her bucket from a trickling tap. The local municipality reported the theft of a 70mm pipe and said they had replaced it with a smaller pipe thus giving off a lower pressure. (Photo: Shiraaz Mohamed)

Another resident, Martin Matanye complained, “I am shocked that we have been without any water for so long. Usually, we don’t have water for a few hours but then it comes on. I am unhappy because no one from the municipality has bothered to inform the community about the problem.” 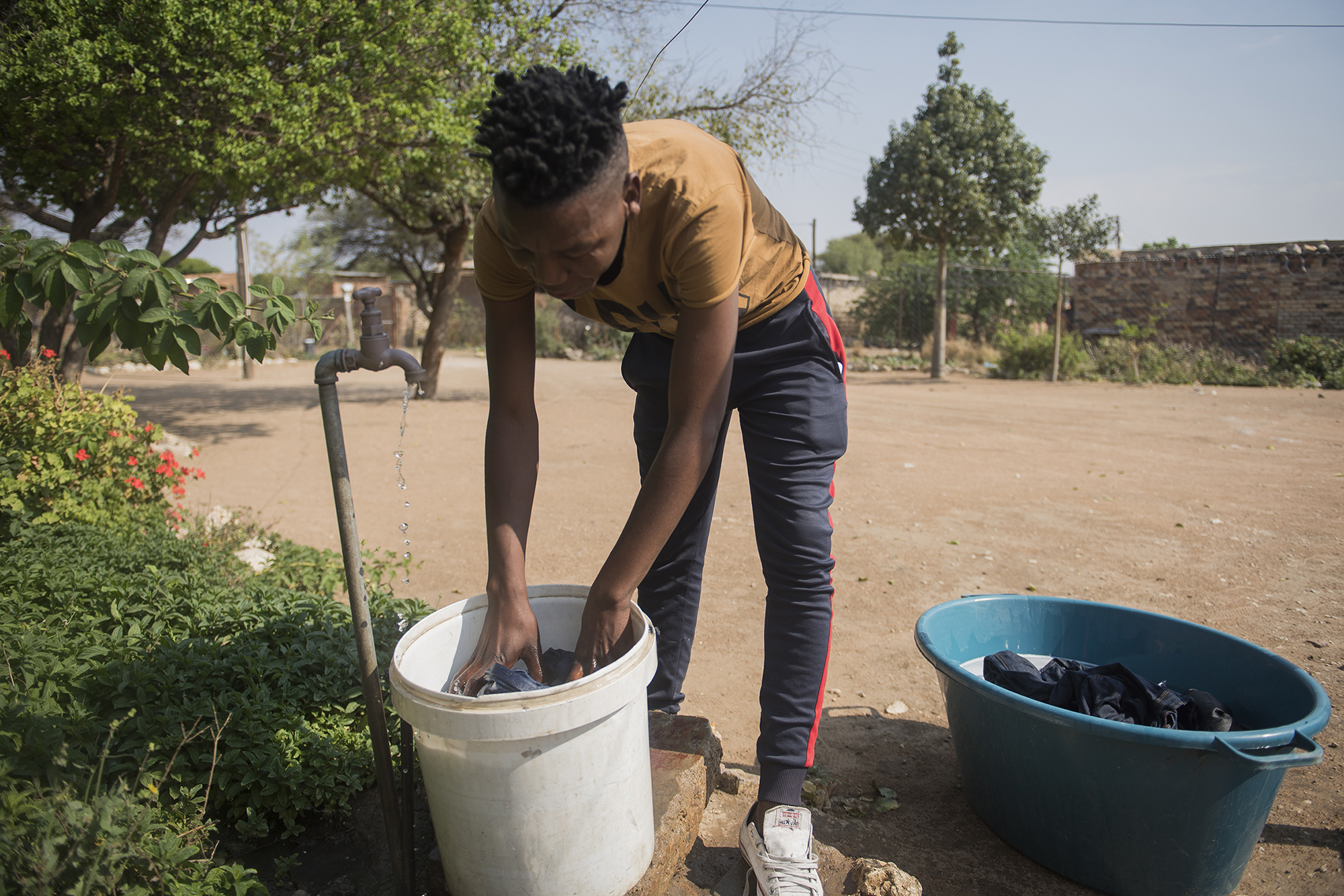 Water trickles  out of a tap as a man washes clothing. (Photo: Shiraaz Mohamed) 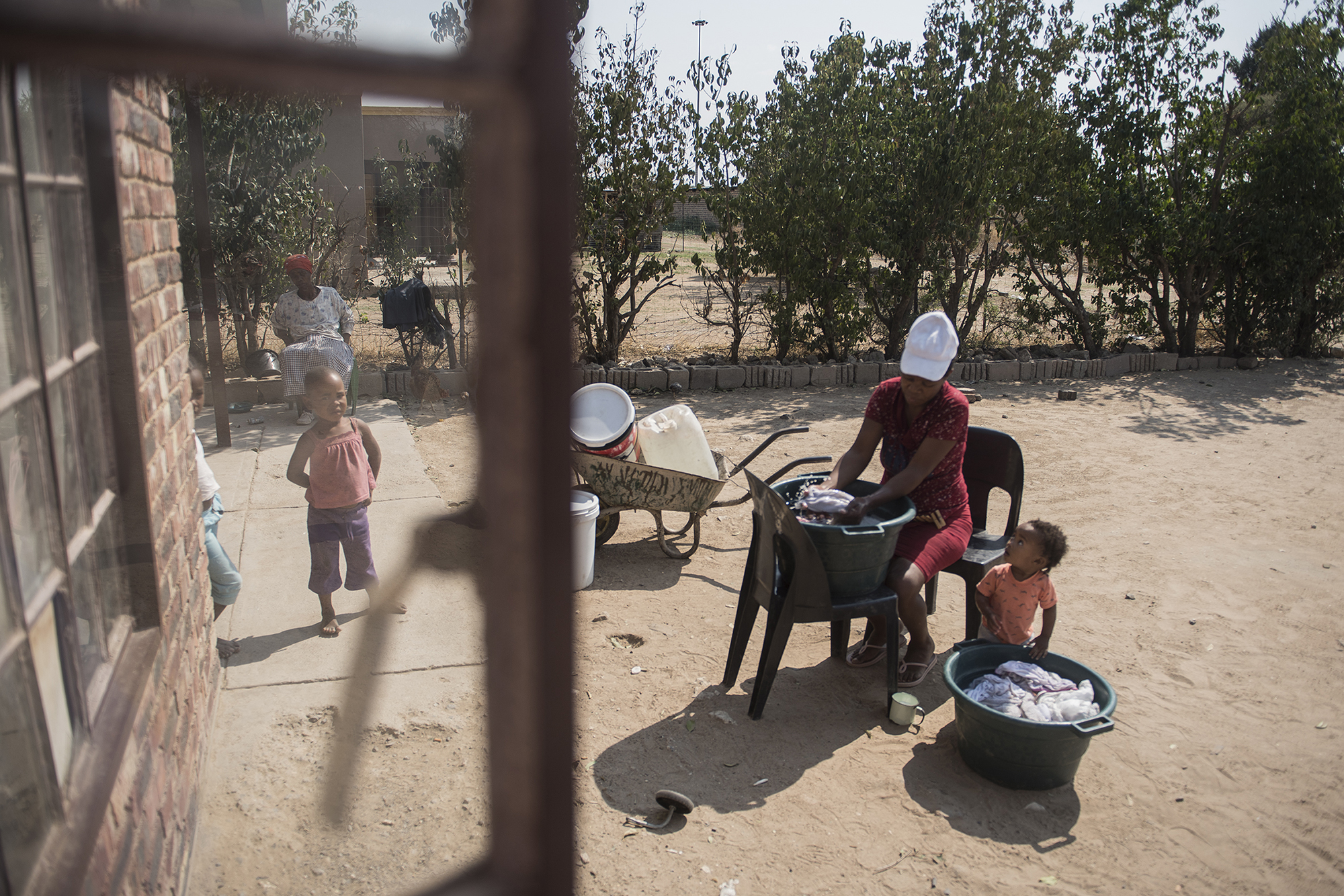 A woman washes clothes while her baby watches. Not all residents have taps installed in their yards and they make use of wheelbarrows to collect water. (Photo: Shiraaz Mohamed)

In an email, March said that the local water treatment plant had been vandalised and pump station cables stolen, for a second time, during the week of 18 September 2020.

“The water treatment plant’s 70mm underground cable was stolen. Therefore, in mediating the situation currently, a smaller cable was fitted to the plant so that water can be temporarily restored while awaiting the correct sized cable, thus limiting the pressure of water,” March said. 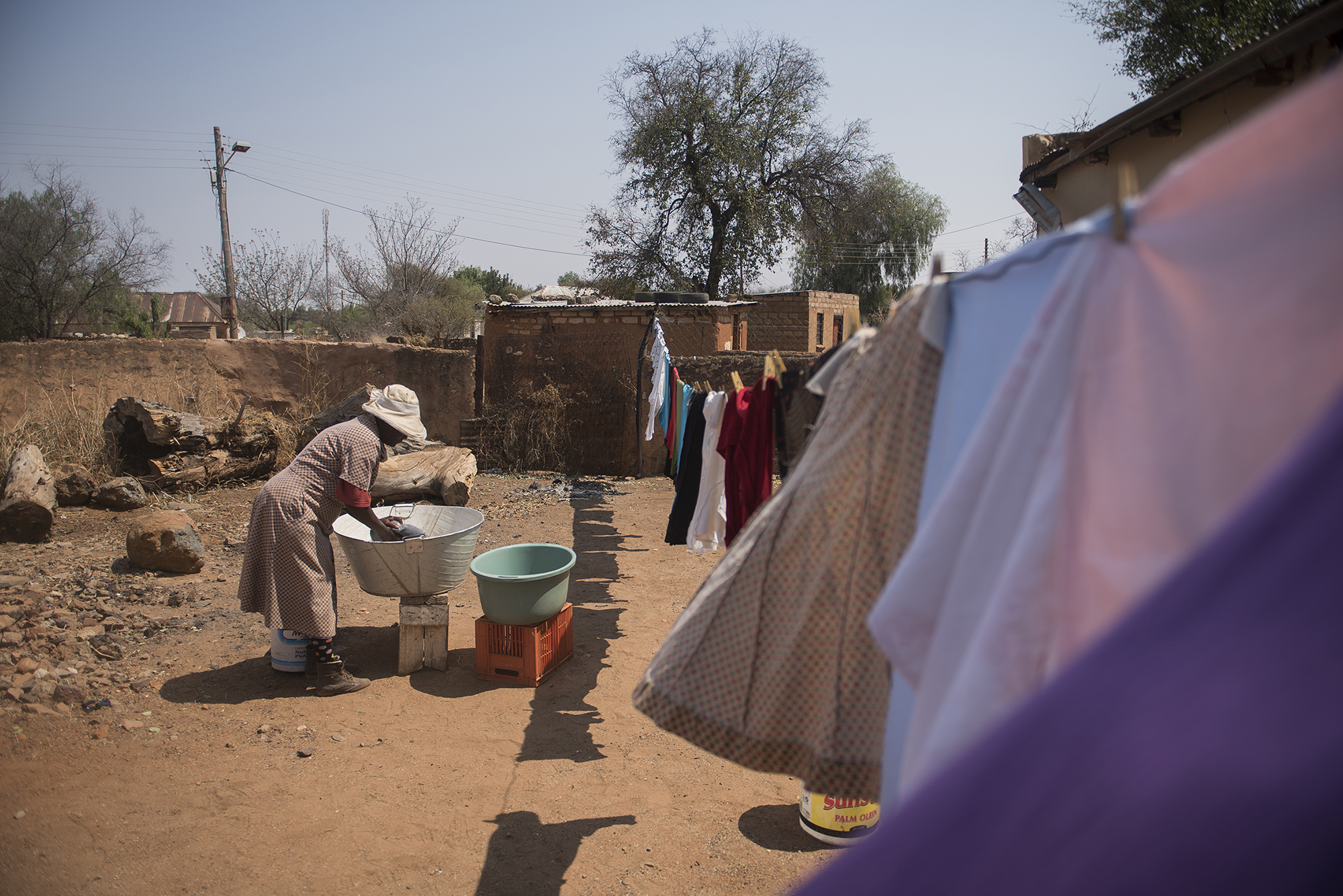 Leah Mothusi does her washing. As an aged lady, she feels that communal taps should be located closer to residents homes. (Photo: Shiraaz Mohamed) 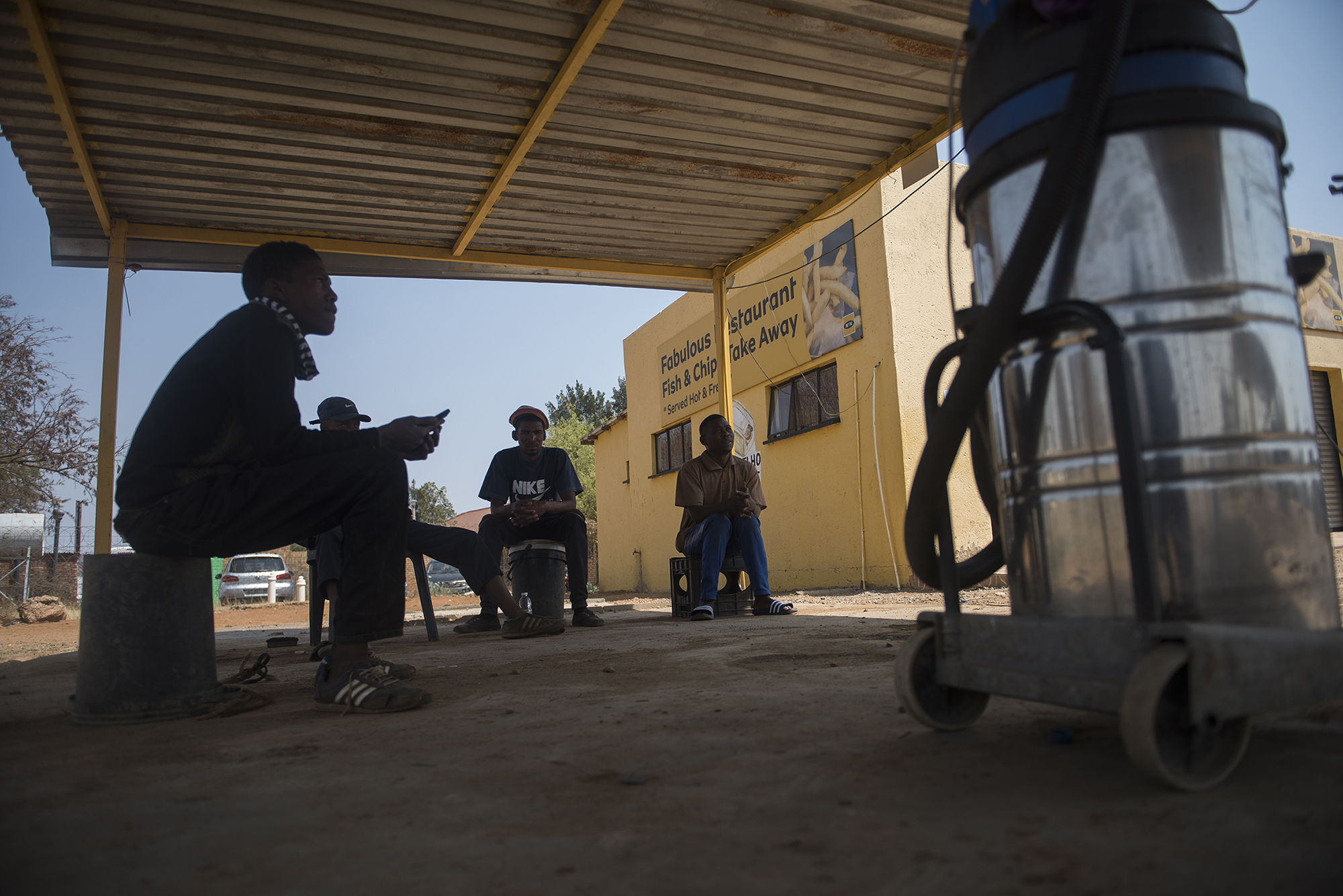 Car wash employees sit under a car port as they wait for water to be returned. (Photo: Shiraaz Mohamed)

The technical team was on site to restore water supply and the district would report on the progress to affected communities. DM

Carragher on Mourinho: they Said his football was from a different era. If he won the Premier League, it would be great
Gennaro Gattuso: Napoli need to play above all praise to beat real Sociedad
Neymar was substituted in the 26th minute of the match against Istanbul due to injury. He was crying
Juventus shares have risen four times in five years. Ronaldo-this is only one of the reasons
Gary Neville: Mourinho gives Tottenham the confidence to win the Premier League. Jose is only Interested in winning
Rivaldo: I'm not sure about Barcelona's chances of winning the Champions League
Toni Kroos: there was always a party at Bayern after away games in the Champions League. It was annoying
Source https://www.dailymaverick.co.za/article/2020-09-24-residents-feel-let-down-by-mahikeng-municipality-after-taps-run-dry/

Sundowns held to a goalless draw at home against Tshakhuma

News24.com | Covid-19: France to go back into lockdown as virus death toll rises

News24.com | City of Johannesburg to act on those implicated in internal Covid-19 investigation report

News24.com | Gatland says Springboks could be 'underdone' for Lions tour

John Hlophe’s lawyer loses bid to have his assets unfrozen

WATCH: Huge effort to clear millions of nurdles washing up on Cape coastline

News24.com | 'KwaSizabantu saved me from my abusive father' - mission teacher speaks out

Trellidor to buy UK franchisee as it eyes European expansion

News24.com | Police in Cape Town accused of shooting pregnant woman in her own yard

News24.com | No mental scars for Elton Jantjies and his troops as Lions avert Covid-19 outbreak

We can only control what we can, says upbeat Lions boss about Covid

Seychelles: Seychelles' National Assembly, Controlled By the President's Party, Is Sworn in

Lions face quality conundrum: Who will they leave out?

Mboweni: SAA funding the fulfillment of an obligation as SAA's shareholder

News24.com | Trial for cop accused of molesting children at a school he was investigating postponed to next year

MARKET WRAP: JSE drops the most in seven months as global markets plunge

Germany to impose partial lockdown to stem the pandemic

Mini Budget 2020: Protesters outside Parliament demand an end to cuts, more education spend and no bailout for SAA – Did Mboweni listen?

News24.com | Thursday's weather: The heat is on across the country

Malema: We must never be threatened by apartheid policemen, racists

Rand slumps as MTBPS reflects more of the same

Israeli wine will soon be available in Dubai

Police Are Chased In Philly After Killing Another Black Man, Biden And Kamala Tell Protesters Looting Is A Crime, Stop Beating Up On Our Police

National Guard deployed in Philadelphia amid protests over another police killing

US elections: This is how a second term for Trump could impact SA

PETER BRUCE: That screeching was Tito Mboweni hitting the brakes on promises to cut spending

COVID-19: Russia applies for WHO emergency use tag for its COVID-19 vaccine