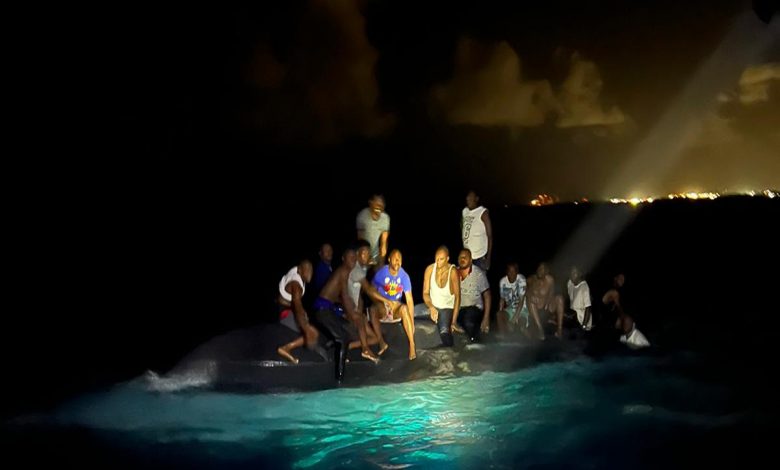 In this July 24 file photo, Haitian migrants cling to an overturned boat four to five nautical miles from the entrance of Nassau Harbour. RBDF

Minister of Immigration Keith Bell said yesterday the government will deport some of the survivors of a recent failed human smuggling operation tomorrow.

“As it relates to the survivors, this week we anticipate that we’re going to repatriate 130 irregular Haitian migrants to Haiti and another 30-plus to Cuba,” Bell said.

“In that number going back to Haiti, there will be 15 migrants who were involved in that tragedy at sea.”

Bell was unable to indicate when the remaining migrants will be deported.

Forty-five people were on board a 33-foot twin-engine vessel – which authorities said was headed to either Freeport, Grand Bahama, or Florida – when it capsized four to five nautical miles from the entrance of Nassau Harbour shortly after 1 a.m. on July 24.

Seventeen people, including a one-year-old girl – all believed to be Haitians – died in the tragedy.

Twenty-five people, including two Bahamian men, were among the survivors rescued from waters off New Providence, authorities reported.

So far, six victims have been officially identified.

Four men were charged with 18 counts of manslaughter in connection with the tragedy.

The 18th count was for manslaughter of an unborn child because one of the 17 victims was pregnant.