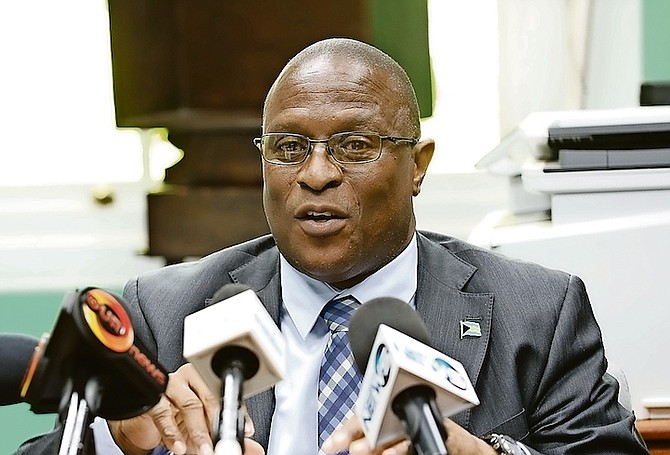 LEADER of the Opposition Michael Pintard.

FREE National Movement leader Michael Pintard said he is not surprised that the Davis administration has delayed presenting marijuana legalisation to Parliament.

On Monday, Attorney General Ryan Pinder said that it is “not likely” the government will present the marijuana legalisation to Parliament before the end of the year as promised.

Mr Pinder noted that the government is still working on the proposed legislation, however, he was unable to give a definite timeline.

While acknowledging the delay due to “technical details”, Mr Pintard said the government has neglected to have “meaningful” discussion with members of the public in regard to their intentions with the legislation.

Noting that the government has failed to conduct preliminary work, he added that it is “unfortunate” that the Davis administration has failed to engage in a wide range of conversation.

“The reality is, they could be having discussions with various stakeholders to once again, get a sense on where important segments of our community stand on this subject,” he said. “The government should not be hazy, smudgy on the point of ownership.

In addition, Mr Pintard suggested that the government can engage in conversation with health professionals to better understand the potential impact surrounding cannabis.

While the FNM has previously expressed their disappointment in the government’s failure to bring marijuana legislation to Parliament, Mr Pintard said the government must become “definitive” about their position on ownership and the categories of Bahamians eligible to be at the forefront of the industry.

Mr Pintard, who continues to support cannabis reform, said that this piece of legislation should be a priority, especially because people who have been convicted of possession of small quantities of marijuana should not continue to have criminal records as it may have impacted employment opportunities and travel.

Despite the FNM’S recommendations, he noted the government has resisted and failed to act accordingly, while also criticising the attorney general for contributing to the delay of lifting this “albatross” that affects the lives of many young people.

FRONT PORCH: Responsibilities, rights and obligations of a free press

Davis administration has ‘thrown in the towel’ on illegal migration, Pintard says

Rejoice because your reward is in heaven

Top seeds prevail in the BAISS

Movi Group comes on board with CARIFTA Games

Bosland: BIA did not agree fully to terms on health insurance VAT claims

Sears: At no time did I deliberately mislead House

No plan to change US travel policy regarding Bahamas, official says

Sentencing of doctor who was convicted of rape adjourned

US judge orders that SBF have no contact with former employees

Police called in as General Manager of Restview Memorial Mortuary is fired!!!

Future Honors Bob Marley With A New Tattoo On His Leg

ALICIA WALLACE: Misconceptions of what anger is

EDITORIAL: Family to view footage of shooting - but what are the rules?

British Colonial Hilton may be fully opened by end of year

‘Area footage’ to be shared with police shooting victim’s family

British Colonial could reopen fully by the end of 2023

US donates new vehicles to police

Preachers are leaving the pulpit like Lot and his family! Christians should become CONCERNED!!! (The ones who believe in JESUS CHRIST THAT IS)!