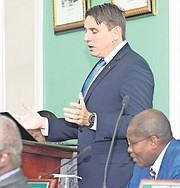 DESPITE the end of the Special Economic Recovery Zone provisions, government MPs reiterated yesterday that residents in Grand Bahama and Abaco still needing post-Dorian assistance can apply to the relevant agencies to get the help they need.

Acting Prime Minister Chester Cooper and Central and South Abaco MP John Pinder spoke on the issue after a lengthy back-and-forth with opposition members, who claimed residents and business owners have been struggling to find money to assist with recovery efforts.

“I say for the record, any resident or citizen of The Bahamas in Grand Bahama or in Abaco who have been disadvantaged in relation to their property, and I’m sure the member of Central will speak to this, can still make application to the ministry of Grand Bahama,” Mr Cooper said.

Mr Cooper said the government will also ensure that revenue is collected so people in need can be supported and accused opposition MPs of seeking to score “cheap” political points.

Mr Pinder later added: “Any Abaconian and Grand Bahamian that needs to rebuild a house or business can put their application in and it will be approved.”

However, Free National Movement leader Michael Pintard, rising on a point of order, responded, saying he has received numerous complaints that applications are not available.

“First of all, in Grand Bahama, as members of Parliament, we consistently got complaints that people did not know what that process was. Two, when those who knew what the process was checked for the forms and the forms were not available,” the Marco City MP argued.

Mr Thompson said residents were seriously concerned about the process, saying “there are no forms, there is no criteria, there is no parameters as to what could be asked for.”

He questioned: “For example, can cars be asked for? Building materials? Can we ask for any assistance for duty-free?”

State Minister for Disaster Preparedness Myles Laroda confirmed at yesterday’s afternoon session that applications were available at some offices in Grand Bahama and will be available in Abaco today.

He also revealed that some 20 applications were stamped by finance officials and will be returned to those individuals today.

“(I have also been advised) that new applications for those individuals who may have been impacted who were either not working or for whatever reason could not have acted on those SERZ orders that the due diligence will be taken on them immediately once their application forms are in and they will be looking to provide approval for those affected by early January 2023,” he also said.