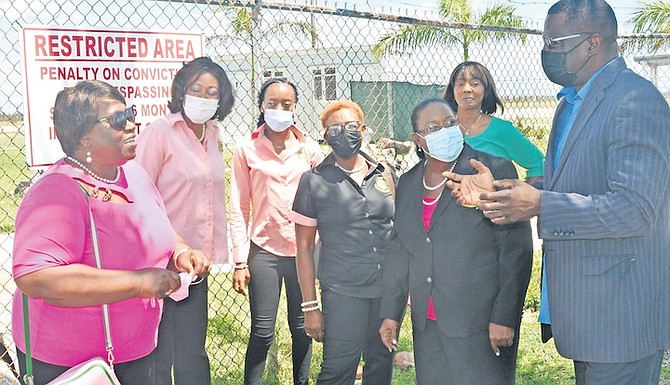 Chapter president Yvonne Pearson and Ministry of Tourism executive Steven Johnson met and greeted Ms Daley on her arrival at Grand Bahama International Airport at 11.30am on Friday.

Ms Daley’s official visit coincided with the Chapter’s 35th Charter anniversary celebrated on Sunday, May 22, with a church service at the Pro-Cathedral of Christ the King, followed by a luncheon at Blair House, where seven women were welcomed into the sorority.

As international regional director, Ms Daley oversees the 18 chapters located outside of the continental USA that make up the International Region in countries such as Africa, Asia, Europe, and the Caribbean.

She visits the chapters in the region at least once in her tenure.

“It is wonderful to have you in Grand Bahama, and I know the wonderful work you (the sorority) do,” the minister said.

Ms Moxey believed that there is an opportunity for collaboration on initiatives that seek to improve people’s lives. She also expressed interest in developing a long-term relationship with the organisation.

She explained that the unit is designated to partner with NGOs, businesses and other government agencies and the community to assist with the basic needs of residents and the growth and development of GBI.

“We are busy...helping other organisations achieve their goals,” she said.

Ms Daley said the sorority was founded on the campus of Howard University in 1908. She said AKA has ten regions - nine are based in the US, and one International Region.

“So, we are an organisation of 114 years old, and we have over 300,000 members, of which 114,000 are active members internationally. It’s a service organisation,” she told Minister Moxey.

Members of Pi Upsilon Chapter also met with Ms Daley one-on-one at a meet and greet event held on Friday evening at the Port Lucaya Marketplace.