Leaders ponder what Florida will look like after Ian's lethal impact. 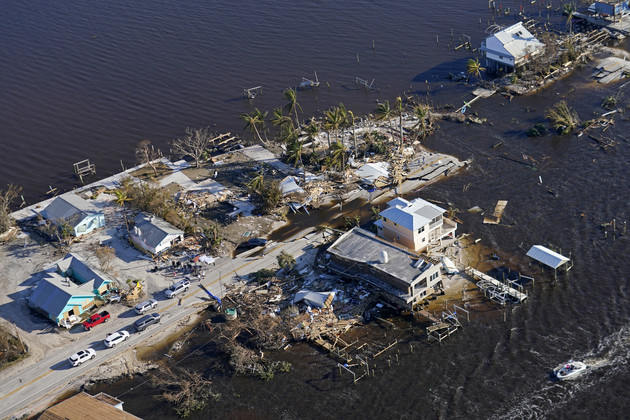 Hurricane Ian was a “character-altering event” for the state of Florida, Sen. Marco Rubio said Sunday, as state and federal officials reflected on the damage wrought over the course of the week.

“Fort Myers Beach no longer exists,” Rubio (R-Fla.) said on ABC’s “This Week,” referring to one of the areas hardest hit by the storm. He added that when the town is rebuilt, “it’ll be something different. It was a slice of old Florida that you can’t recapture.”

The death toll from the storm has grown to more than four dozen. Many homes are severely damaged or completely destroyed, particularly on the western coast of Florida where the storm made landfall, FEMA Administrator Deanne Criswell said on CNN.

In central Florida, some homes are “still underwater” as a result of flooding as the storm crossed the state, she said.

Rubio characterized the federal response so far as “very positive, as it’s always been in the past.” President Joe Biden had multiple meetings with Republican Gov. Ron DeSantis, and plans to visit both Florida and Puerto Rico in the coming days, following successive devastating storms.

The scope of the destruction led to discussion of a relief bill Sunday.

Rubio, asked whether he would support a bill for relief bill including funding for seemingly unrelated projects, said on CNN’s “State of the Union” he would “fight against it having pork.”

The senator voted against relief for Northeastern states for Hurricane Sandy in 2012, but defended that vote Sunday as against provisions in the bill that were not proximate enough to disaster relief.

Scott, a former governor of Florida, avoided making judgment on the actions of local officials in Lee County, which did not send an evacuation order to its residents until Tuesday; several nearby jurisdictions issued evacuation orders Monday.

“It’s something we’ll have to look at,” Scott said on CNN’s “State of the Union.” DeSantis has said those officials acted appropriately.

Florida suffered massive flooding and widespread damage to infrastructure from Hurricane Ian, and the storm has left hundreds of thousands of people without power as it crossed nearly the entire state. It made landfall in Florida on Wednesday as a powerful Category 4 hurricane, and hit the coast of South Carolina Friday as a Category 1 hurricane.

Ian continued to climb the East Coast on Sunday, dropping rain far and wide. But both Gov. Brian Kemp (R-Ga.) and Gov. Roy Cooper (D-N.C.), speaking on Sunday morning shows, said their states had avoided the type of damage seen in Florida.

“Certainly we have avoided the worst of it, and we sympathize with the people in Florida. We’ve offered help to them,” Cooper said on NBC’s “Meet the Press.”

China Braces for Another COVID Wave