The Yankees had a full-on champagne and beer celebration for their AL East-clinching victory over the Blue Jays on Tuesday night.

How did Aaron Judge celebrate after belting his 61st homer, which he hit in the seventh inning Wednesday night at Rogers Centre?

He received a toast from fellow slugger Giancarlo Stanton, who tapped paper cups with Judge while holding some water in the dugout after the historic blast. Judge’s two-run shot gave the Yankees a 5-3 lead.

Stanton knows a bit of trying to chase down home run history. In 2017, his last season with the Marlins, Stanton hit 59 homers and had 132 RBIs but was unable to get to the magical 60 and 61 home run marks.

During that season, which has been the best in Stanton’s career, he hit homers No. 58 and 59 on Sept. 28 against the Braves, giving him three more games to reach the 60-homer plateau. Stanton did collect five hits in those last 14 at-bats, but never left the yard. 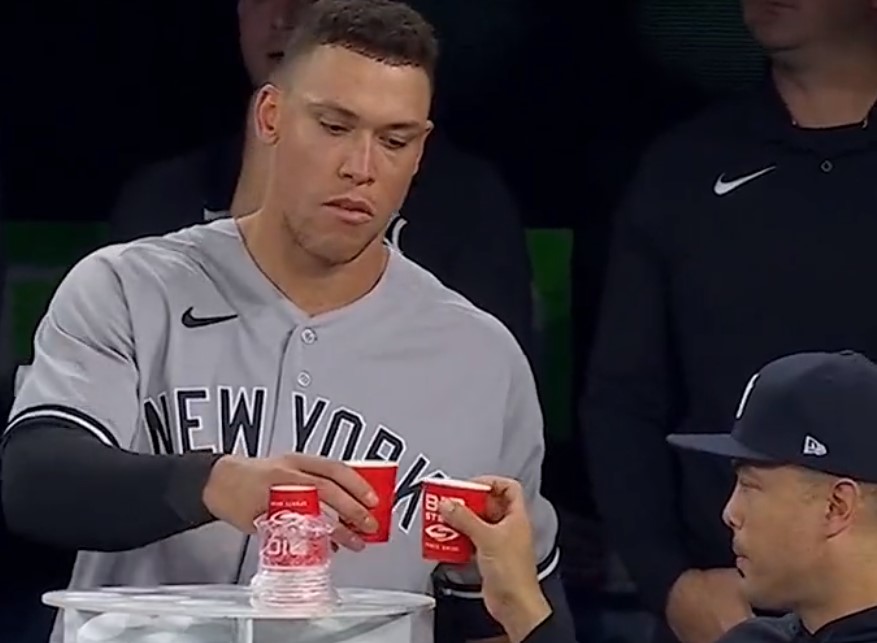 When asked about how he dealt with the pressure of trying to reach the 60 and 61 home run mark, Stanton answered it gracefully.

“How’d I deal with it? By not getting it,” Stanton said with a grin.

But Stanton helped Aaron Judge enjoy a victory when he hit his 60th home run on Sept. 20 against the Pirates. Stanton’s belted a walk-off grand slam in the ninth inning to lead the Yankees to an improbable 9-8 come-from-behind victory over Pittsburgh at the Stadium.