TORONTO — Aaron Judge is in the Yankee record books.

Judge tied Roger Maris’ franchise and American League home run record by hitting his 61st homer of the season in Wednesday’s 8-3 win over the Blue Jays at Rogers Centre.

The historic two-run shot came off left-hander Tim Mayza on a 3-2 pitch with Aaron Hicks on first and no one out in the top of the seventh.

It also gave the Yankees a two-run lead, as they won for the ninth time in their last 10 games.

The ball, which Judge hit like a laser at 117 MPH, hit high above the Blue Jays’ bullpen in left field and came in his 35th plate appearance since hitting his 60th. 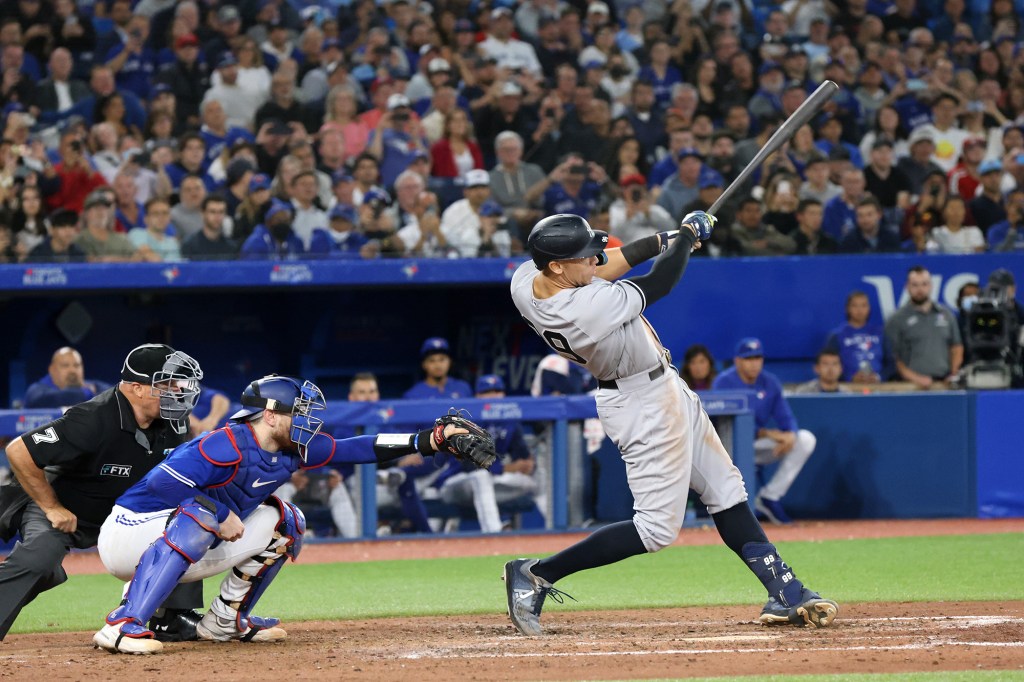 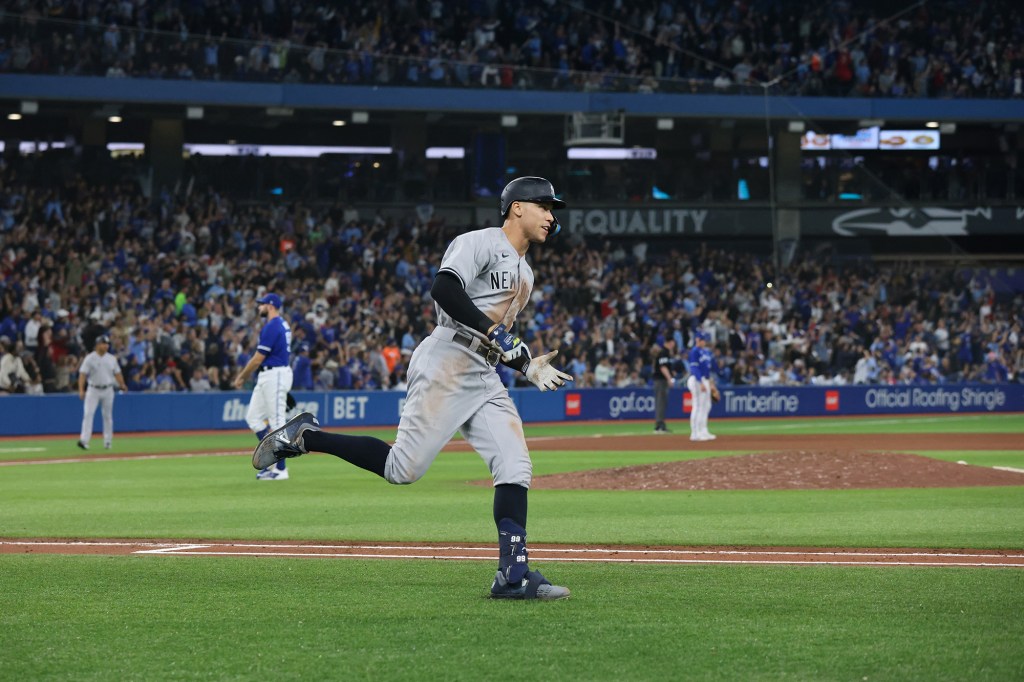 After Judge rounded the bases, he was embraced by teammates and coaches outside the visiting dugout, with his mother, Patty, and Roger Maris Jr. in attendance.

He came up again with two outs in the eighth and grounded to short, but Judge has seven games left after Thursday’s off day to break Maris’ mark, which was set in 1961.

The home run came a day after the Yankees clinched their first division title since 2019 and an inning after Gerrit Cole gave back a three-run lead after five perfect innings.

The Yankees scored three times in the top of the first against right-hander Mitch White. 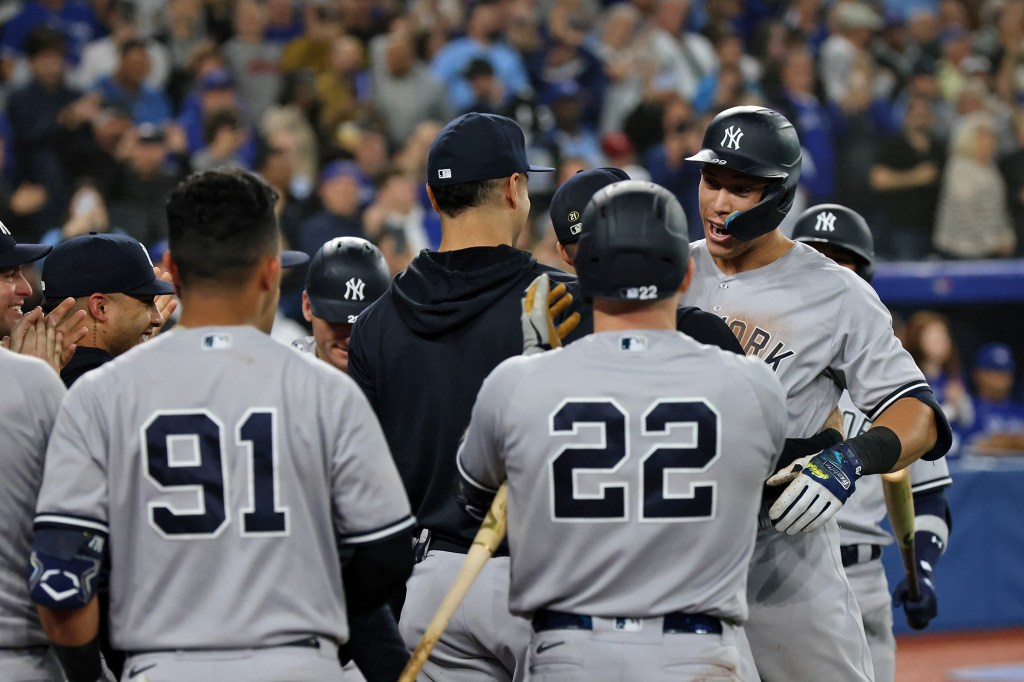 Judge started things off with a leadoff walk, his fifth straight walk over two games.

Oswaldo Cabrera followed with a walk and Josh Donaldson singled to center to knock in the Yankees’ first run.

Oswaldo Peraza added an RBI single, as the first four Yankees reached base. Marwin Gonzalez had a sacrifice fly later in the inning to make it 3-0. 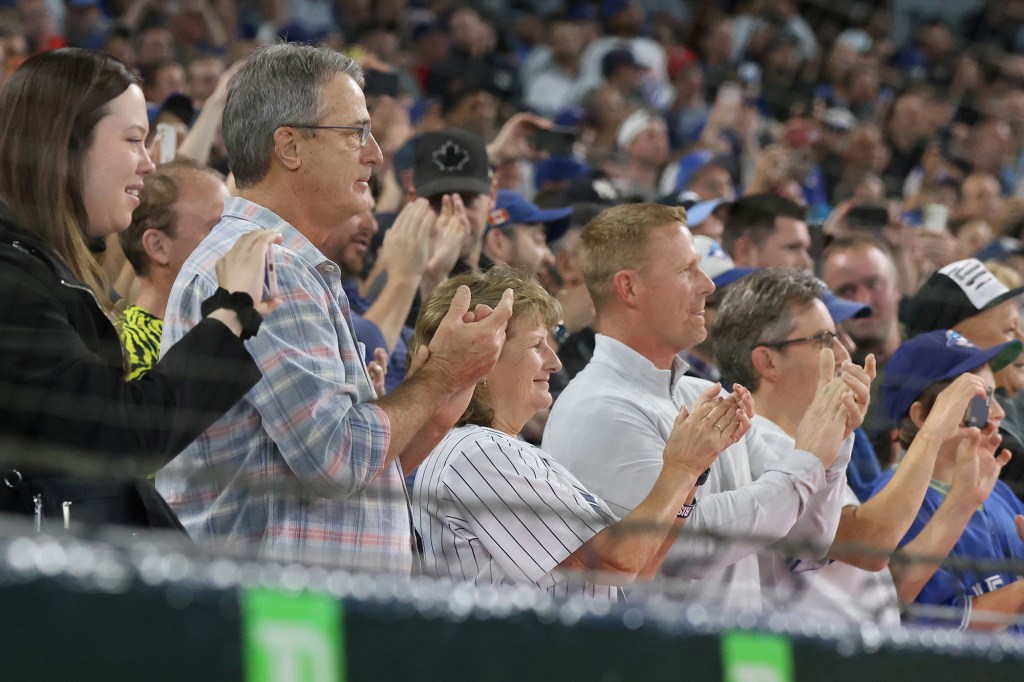 Cole, after three straight mediocre starts and 10 homers in his previous six outings, was dominant through the early part of Wednesday’s game.

He retired the first 15 batters he faced before Danny Jansen broke up the perfect game with a leadoff homer in the sixth to cut the Yankees’ lead to 3-1.

Cole ended the fifth by striking out Raimel Tapia to tie Ron Guidry’s season-strikeout record of 248, which Guidry set in 1978.

Cole made a run at his first career no-hitter earlier in the season when he took a perfect game into the seventh against the Tigers and also a no-hitter into the eighth on June 20 against the Rays.

On Wednesday, after Jansen took him deep, Cole gave up a single to Whit Merrifield and a walk to Jackie Bradley Jr. before George Springer lined to right.

An infield hit by Bo Bichette made it 3-2 and Cole then balked the runners up a base with Vladimir Guerrero Jr. at the plate. Guerrero’s sacrifice fly to left tied the game.

After Judge gave the Yankees the lead in the seventh, the Yankees added a run when Bradley Jr. misplayed Harrison Bader’s single to center and Peraza came around to score.

Zack Britton, in his second appearance since returning from last year’s UCL surgery, was shaky again, as he walked two of the three batters he faced before Scott Effross finished the inning.

The Yankees padded their lead thanks to more incompetence from the Blue Jays in the ninth, as Cabrera doubled off sidearmer Adam Cimber and Donaldson was hit by a pitch before both runners moved up on a Peraza comebacker.

Bader followed with another comebacker and with Cabrera at third, Cimber tried to throw home, but misfired terribly, allowing Cabrera to score.

Making matters worse, Cimber reacted angrily and then pouted, not noticing that Donaldson was coming home, as well. Aroldis Chapman finished with a scoreless ninth.