Allstate and Progressive broke ties with insurance companies in Maine after posting a "racist" sign on June 16th, causing a backlash on social media.

"Juneteenth. Whatever it is ... we are closed," read the stupid sign. "Enjoy fried chicken and collard green."

Needless to say, off-color gag explodes anger on Twitter with a single poster@ C1976George for collaboration with insurance companies. CalledAllstate and Progressive.

"Is it the @Allstate logo in the bottom right?" An incredible user smoked. "They also do @progressive. Is this the type of hatred you want to post right next to your company logo?" 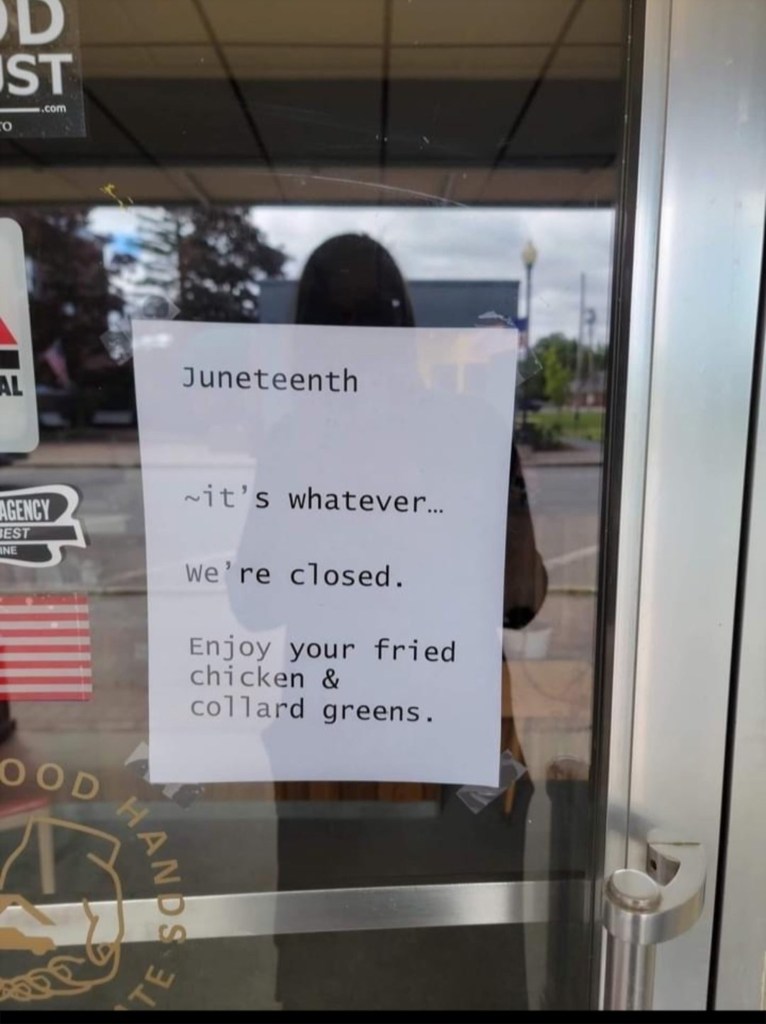 Needless to say, it was incompatible with the company. Both agencies reportedly terminated their partnership with Harry E. Reed, according to the Discrimination "Policy", WGME.

"End the contract with this independent agent"Allstate wrote to the official Twitter account. "Our commitment to inclusive diversity and impartiality is indisputable and takes action if an individual violates our Code of Conduct."

Meanwhile,Progressive Spokesperson Jeff Sibel emailed a statement to the NPR: "In Progressive, diversity, equity and inclusiveness (DEI) are the cornerstones of our core values. We are our employees. Feels welcomed, valued and respected, and is committed to creating an environment where everyone on behalf of Progress is expected to participate in this effort. ”

"Sign directly violates that commitment and is inconsistent with our core values ​​and code of conduct," he added.

Harry Reid Insurance in Millinocket, Maine put this sign on the window. And is it the@Allstatelogo in the bottom right? You must also run @progressive. Is this the type of hatred you want to post right next to your company logo? pic.twitter.com/P1KeJb5UOq

Suspected According to the WGME, the person who posted the autograph has said since he apologized on Facebook:

"One of the most important stories of our lives:" Analysis of media coverage of the Roe v. Wade case

Democrats still have this faint light of hope for midterm elections

Kyiv's bombing was considered a slap in the G7, and the girl was rescued from the rubble by an attack.

"It's a terrible scene": At least 21 teens die in a tavern mystery

How the Supreme Court's decision on Roe v. Wade affects the fertility industry

The Umbrella Academy: Tom Hopper and Emmy Laborampman break through the darkest moments of Season 3

Biden does not yet support court packing, White House confirms

"We were telling all sorts of stories to different audiences," said Pence's Chief of Staff.

LIV Golf players face discipline from the DP World Tour: "Not fair to the majority"

13 out of 22 people died in South African tavern incident

Please keep your returns: The store pays not to bring back unnecessary items

Launch rocket into space as nuclear negotiations for Iran to resume

Blinken states that Putin has "already failed" in his strategic goal to end Ukraine's independence.

Benedict Maturin boasts that LeBron James "must show me that he is better than me."

Martina Navratilova says Wimbledon's ban on Russians is a "mistake"

Hadrian frescoes were presented at the baths of ancient Rome

Paul Walker's daughter, Meadow, revealed that she had an abortion during the Roe v. Wade decision.

AOC: SCOTUS judges lying about their position at the time of confirmation should be impeached

Lindsey Graham praises Trump after SCOTUS overthrows Rho. "Deserves most of the credit"

Reporter's Note: Recalling the horrors of the past, witnessing the Russian-Ukraine War

Manziat abandons its 40-year-old home for a new place