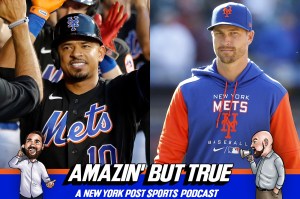 Max Scherzer will be back on Tuesday when the Mets challenge the Reds in Cincinnati. Jacob deGrom is still a few weeks old, but the steps have been taken. He began his first rehab on Sunday night in Port St. Lucie, defeating five of the six batters he faced and exceeding 100 mph to walk in the park.

If Scherzer and DeGrom return to the Queens together, their Mets opponents may lose some sleep.

Introducing a new episode of the "Amazin'But True" podcast to talk about the resurrection of Ace, Eduardo Escobar's July 4th weekend home run party, everything else happening in the Metsland. increase. Nelson Figueroa and me. Post John Heyman will join the program for the first time.