EXCLUSIVE: A majority of Americans believe the U.S. military is becoming overly politicized, according to a poll exclusively obtained by Fox News.

Sixty-two percent of respondents to a survey for the Reagan National Defense Forum expressed concern over politicization — a feeling shared by Republicans and Democrats.

Half of respondents expressed concern over "woke" practices at the military — mostly Republicans — and 46% said that so-called far-right or extremist individuals serving in the military decreased their confidence in the armed forces.

Woke practices in the military imposed by the Biden administration through diversity, equity, and inclusion initiatives has sparked criticism from Republicans who say the policies decrease readiness. Sen. Marco Rubio, R-Fla., and Rep. Chip Roy, R-Texas, released a report in November that summarized some instances, including military members pushing critical race theory and anti-White views, and the government covering the costs of transgender surgeries for members of the armed services. 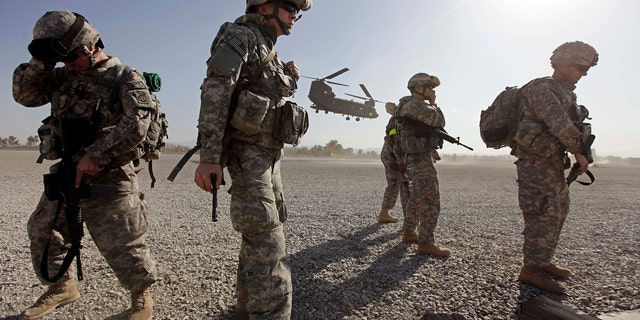 By using technology developed by private companies, the Air Force says it saved time and manpower, and even saved nearly a million dollars of fuel per week. (REUTERS)

The Biden administration has focused on ways to counter extreme views within the ranks of the military, in part as response to the Jan. 6 attacks on the Capitol. But a report from the administration titled "Countering Extremist Activity Working Group" later identified fewer than 100 cases of extremism from the 2.1 million active forces, a rate of .005%. 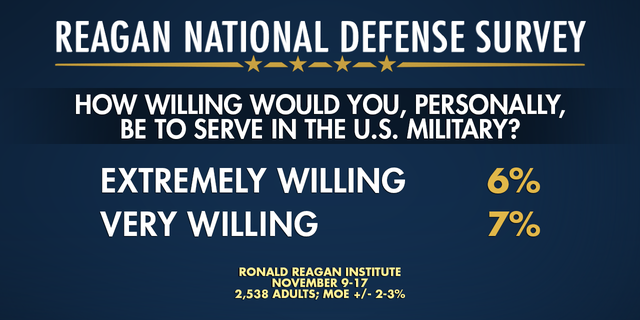 Concerns over politicization of the military do not appear to have not impacted overall support. The survey found 81% of respondents trust the military — a three percent increase from last year. The military's support easily trumps that for Congress at 33%, the presidency at 40%, Supreme Court at 45%, and news media at 35%.

Still, only 13% responded that they were willing to join the military. Military recruitment has slowed in recent years, with the Army missing its recruitment target by 25% this year. 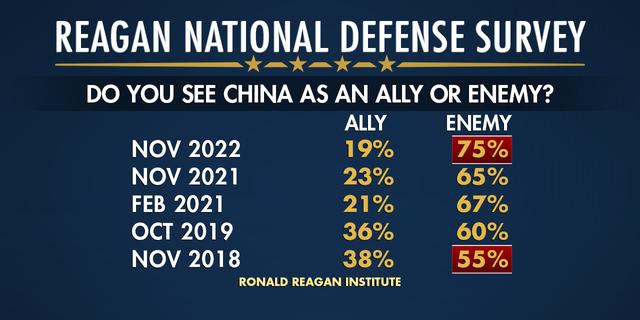 China remains to be seen as the greatest threat to the nation, but concerns over Russia from respondents increased significantly as the war in Ukraine continues. Respondents who list China as their greatest threat dropped from 52% last year to 43% this year, with Russia jumping from 14% to 31%. 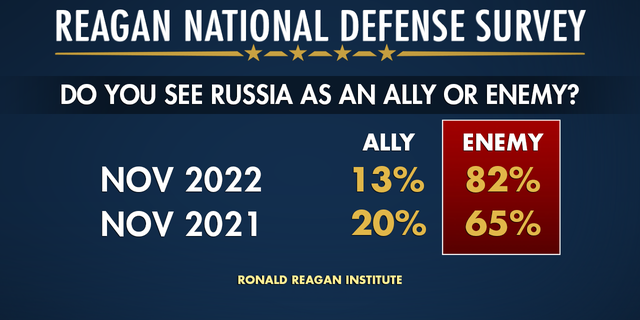 Americans want to continue to support Ukraine, according to the survey, which found 57% believe the U.S. should continue to stand for the country against Russian aggression and 33% believe the U.S. has too many issues at home to focus on the conflict. The issue shows a notable political divide, with 73 percent of Democrats favoring U.S. support for Ukraine and 51% of Republicans. 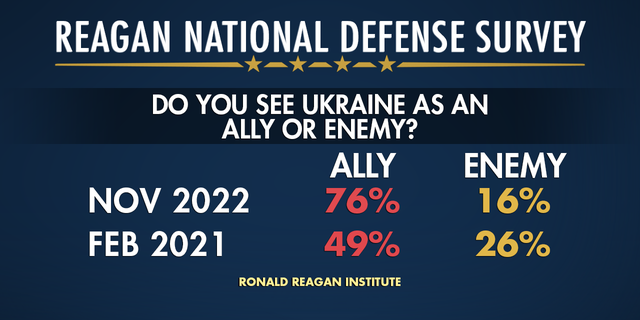 If Russia invaded a NATO country, 72% of respondents said the U.S. should support NATO Article 5 by deploying U.S. military force.

The Reagan National Defense poll has a margin of error of about 2%.

Patrick Hauf is a politics writer for Fox News Digital.

The best contemporary romance novels, per Goodreads and a ‘BookTuber’

Two Years After Coup, Battle of Attrition Grinds on in Myanmar

Suicide bomber kills at least 32 at mosque in Pakistan

Forget Mushrooms, The Real Villain of ‘The Last of Us’ is Carbs

Here's why you should always wait for the earnings call

More than 40 million people are under winter weather alerts from Texas to West Virginia, with significant icing likely

Customers and musicians among 8 killed in nightclub shooting in Mexico