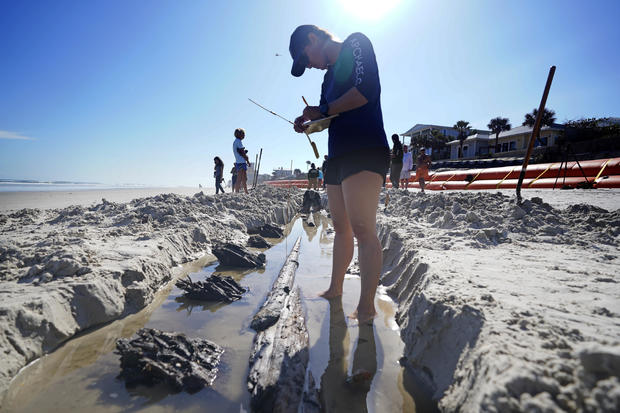 Arielle Cathers jots down information in a notebook at the site of an exposed wooden structure in the sand on Dec. 6, 2022, in Daytona Beach Shores, Fla. Severe beach erosion caused by two late-season hurricanes helped partially uncover what appears to be part of an 80-foot-long ship in the sand on Daytona Beach Shores, officials said. John Raoux / AP

Daytona Beach Shores, Fla. — Severe beach erosion from two late-season hurricanes has helped uncover what appears to be a wooden ship dating from the 1800s that had been buried under the sand on Florida's East Coast, impervious to cars that drove daily on the beach or sand castles built by generations of tourists.

Beachgoers and lifeguards discovered the wooden structure, between 80 feet to 100 feet long), poking out of the sand over Thanksgiving weekend in front of homes that collapsed into rubble on Daytona Beach Shores last month from Hurricane Nicole.

"Whenever you find a shipwreck on the beach, it's really an amazing occurrence. There's this mystery, you know. It's not there one day, and it's there the next day, so it really captivates the imagination," said maritime archaeologist Chuck Meide, who on Tuesday led an archeological team from St. Augustine, Florida to examine the beach find.

Hurricane Ian made landfall in late September on Florida's southwest coast and exited into the Atlantic Ocean over central Florida. Nicole devastated much of Volusia County's coastline in early November, leaving behind homes collapsed into the ocean after they'd been made vulnerable to erosion from Ian.

"It's a rare experience, but it's not unique, and it seems with climate change and more intense hurricane seasons, it's happening more frequently," Meide said of the discovery.

The archeological team on Monday and Tuesday removed sand and made a shallow trench around the structure's wooden timbers, took measurements and made sketches in an effort to solve the 200-year mystery. The digging team members went from using shovels to trowels and then their hands as more of the frame was exposed, so as not to damage any of the wood.

"It's going a lot quicker today but it does take a lot of time," said Arielle Cathers, one of the members of the team, as she kneeled in the sand around the trench unearthing parts of the timber frame with a trowel. "You want to go really carefully."

Meide, who serves as the director of the research arm of St. Augustine Lighthouse & Museum in Florida, said he's convinced the structure is a shipwreck because of how it was constructed and the materials such as iron bolts that were used.

It's not unusual for items to wash up, or become uncovered along beaches, after storms.

In Martin County, about 160 miles south of Volusia County, the skeletal remains of six people believed to be from a Native American burial ground were unearthed by Nicole's wind and waves. A historical steamer-style trunk and other items also washed onto beaches.

After the initial discovery two weeks ago, sand from waves reburied the ship's timbers that had become visible on Daytona Shores Beach. Members of the archeological team this week don't intend to uncover the entire length of the ship, but merely enough to measure it, draw it and possibly take some wood samples to test for its origins.

There are no plans to remove the ship from Daytona Beach Shores, not only because the cost would likely run in the millions of dollars, but because it's protected where it is, packed into the wet sand, Meide said.

"We will let Mother Nature bury the wreck," he said. "That will help preserve it. As long as that hull is in the dark and wet, it will last a very long time, hundreds of more years."