A statement read by a junta spokesman said Capt. Ibrahim Traore is the new military leader of Burkina Faso, a volatile West African country that is battling a mounting Islamic insurgency.

Burkina Faso's new military leaders said the country's borders had been closed and a curfew would be in effect from 9 p.m. to 5 a.m. The transitional government and national assembly were ordered dissolved.

Damiba and his allies had previously overthrown the democratically elected president, coming to power with promises to make the country more secure. However, violence has continued unabated and frustration with his leadership has grown in recent months. 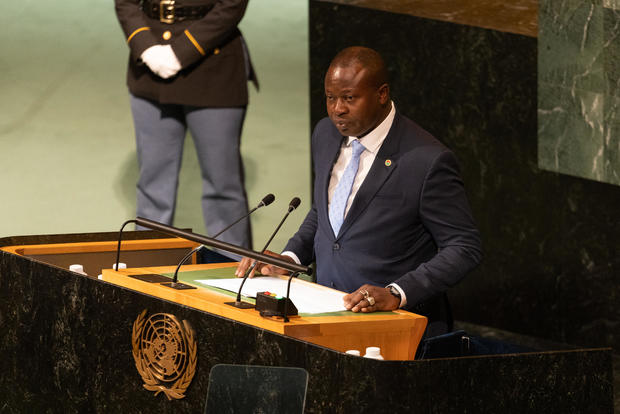 "Faced by the continually worsening security situation, we the officers and junior officers of the national armed forces were motivated to take action with the desire to protect the security and integrity of our country," said the statement read by the junta spokesman, Capt. Kiswendsida Farouk Azaria Sorgho.

The soldiers promised the international community they would respect their commitments and urged Burkinabes "to go about their business in peace."

"A meeting will be convened to adopt a new transitional constitution charter and to select a new Burkina Faso president be it civilian or military," Sorgho added.

Damiba had just returned from addressing the U.N. General Assembly in New York as Burkina Faso's head of state. Tensions, though, had been mounting for months. In his speech, Damiba defended his January coup as "an issue of survival for our nation," even if it was "perhaps reprehensible" to the international community.

"Members of the MPSR increasingly felt Damiba was isolating himself and casting aside those who helped him seize power," Gouvy told The Associated Press.

Gunfire had erupted in the capital, Ouagadougou, early Friday and hours passed without any public appearance by Damiba. Late in the afternoon, his spokesman posted a statement on the presidency's Facebook page saying that "negotiations are underway to bring back calm and serenity." 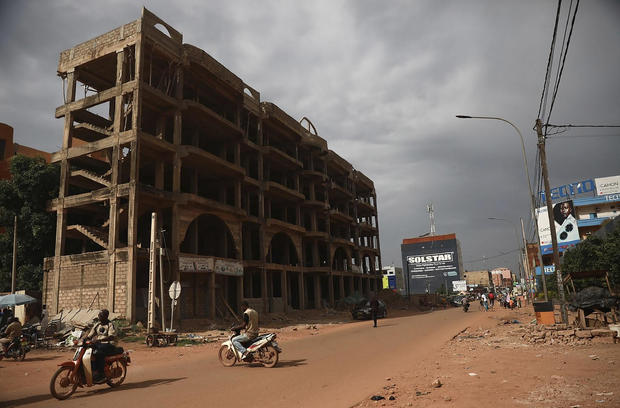 Few venture in the normally busy streets of Burkina Faso's capital Ouagadougou Friday Sept. 30, 2022. Residents say gunfire rang out early in the morning and the state broadcaster has gone off the air, fueling fears that another coup is underway. The developments Friday come just after coup leader-turned-president Lt. Col. Paul Henri Sandaogo Damiba returned from a trip to the U.N. General Assembly. Sophie Garcia / AP

Friday's developments felt all too familiar in West Africa, where a coup in Mali in August 2020 set off a series of military power grabs in the region. Mali also saw a second coup nine months after the 2020 overthrow of its president, when the junta's leader sidelined his civilian transition counterparts and put himself alone in charge.

On the streets of Ouagadougou, some people already were showing support Friday for the change in leadership even before the putschists took to the state airwaves.

Francois Beogo, a political activist from the Movement for the Refounding of Burkina Faso, said Damiba "has showed his limits."

"People were expecting a real change," he said of the January coup d'etat.

Some demonstrators voiced support for Russian involvement in order to stem the violence, and shouted slogans against France, Burkina Faso's former colonizer. In neighboring Mali, the junta invited Russian mercenaries from the Wagner Group to help secure the country, though their deployment has drawn international criticism.

Many in Burkina Faso initially supported the military takeover last January, frustrated with the previous government's inability to stem Islamic extremist violence that has killed thousands and displaced at least 2 million.

Yet the violence has failed to wane in the months since Damiba took over. Earlier this month, he also took on the position of defense minister after dismissing a brigadier general from the post.

"It's hard for the Burkinabe junta to claim that it has delivered on its promise of improving the security situation, which was its pretext for the January coup," said Eric Humphery-Smith, senior Africa analyst at the risk intelligence company Verisk Maplecroft.

Earlier this week, at least 11 soldiers were killed and 50 civilians went missing after a supply convoy was attacked by gunmen in Gaskinde commune in Soum province in the Sahel. That attack was "a low point" for Damiba's government and "likely played a role in inspiring what we've seen so far today," added Humphery-Smith.

"Burkina Faso needs peace, it needs stability, and it needs unity in order to fight terrorist groups and criminal networks operating in parts of the country," Dujarric said.

Chrysogone Zougmore, president of the Burkina Faso Movement for Human Rights, called Friday's developments "very regrettable," saying the instability would not help in the fight against the Islamic extremist violence.

"How can we hope to unite people and the army if the latter is characterized by such serious divisions?" Zougmore said. "It is time for these reactionary and political military factions to stop leading Burkina Faso adrift."